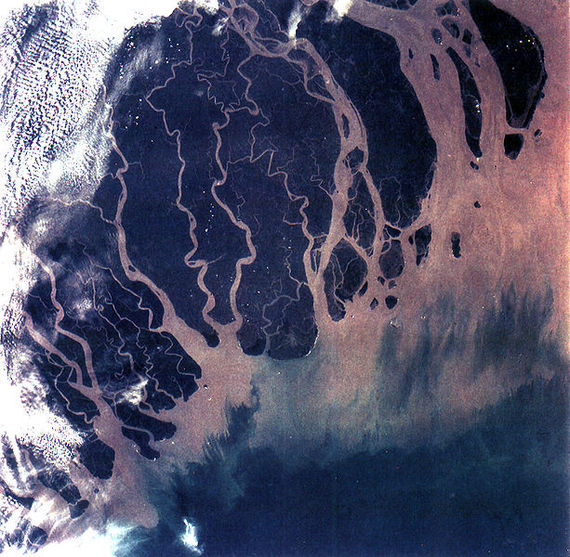 The deltas of great rivers such as the Nile, Mekong, Irrawaddy, Ganges and Brahmaputra belong to the world's most important rice bowls and population centers. Since they link inland waters and marine environments, deltas are also highly productive ecosystems. At a time when coastal areas are already battered by climate change, life-giving deltas are being sacrificed to dam building.

Studies and reports from the ground are warning us that most of the deltas around the world are shrinking due to catastrophic sea level rise. And not all the blame can be put on climate change. According to several independent scientific studies, the major reason behind this effective sea level rise is delta subsidence. Our deltas are literally sinking, shrinking and in grave a peril, and some may not survive in the coming years. This will impact millions of people, major food producing regions as well as valuable ecosystems.

The major reason behind this is sediment trapping by the dams built on the upstream rivers, which are starving deltas of sediment and result in oceans eroding and literally devouring precious deltas.

Dams can trap 80 percent of the sediments they receive, which adds up to an estimated 40 cubic kilometers per year. These deposits eat away at the storage capacity of reservoirs which has been created at a huge social, environmental and economic price. Not all of these sediments would have reached the delta, as much of it would have been deposited in floodplains. On the other hand, clearer rivers pick up more sediment downstream of dams by eroding river banks, thus creating further problems along the way. Even so, an estimated 73 cubic kilometer of sediment has been withheld from deltas so far.

As deltas sink, local sea levels rise. The link between Effective Sea Level Rise and sediment retention by dams has been confirmed by several studies. Other reasons for delta subsidence include the diversion of water by dams, groundwater abstraction, oil and gas exploration and mining. The Intergovernmental Panel on Climate Change projects that sea levels will rise by another 21 to 71 cm by 2070, with a best estimate of 44 cm averaged globally. This will further compound impacts of delta subsidence due to sediment trapping.

Large floods often flush sediments to the deltas, but even in the case of debilitating floods, sediment no longer reaches many deltas. In 2007/08 alone the Ganges, Mekong, Irrawaddy and many other rivers flooded with more than 100,000 lives lost and more than a million habitants displaced. Most of the deltas that suffered from floods did not receive a significant input of sediment. Instead, some studies demonstrate that major flood events lead to huge sediment trapping behind mega dams.

Sediments travel slowly, and so dam building impacts deltas with a time lag. Even so alarm bells are already ringing. It has been estimated that if no mitigation measures are undertaken and sediment trapping continues, by 2050 more than 8.7 million people and 28,000 square kilometers of land in 33 deltas including the Ganga-Brahmaputra, Indus, Krishna and Godavari deltas could suffer from enhanced inundation and increased coastal erosion. According to a study led by Prof. James Syvitski of the Colorado University, delta area vulnerable to flooding could increase by 50 percent under the current projected values for sea-level rise in the 21st century. This could increase if the capture of sediment upstream persists and continues to prevent the growth of the deltas.

The direct impacts of delta subsidence and effective seas level rise include inundation of coastal areas, saltwater intrusion into coastal aquifers, increased rates of coastal erosion, an increased exposure to storm surges, in addition to the threats to food security, livelihood security, water security for millions and a huge loss of biodiversity. These threats impact hundreds of millions of people who inhabit the delta regions as well as the ecologically sensitive and important coastal wetland and mangrove forests.

As Prof. Syvitski, the Chair of the International Geosphere-Biosphere Programme, told us, "We must learn to do better." However, decisions surrounding dams in most regions of the world are not even considering the impacts on deltas. Ignoring sediments when building and operating dams comes at a huge price. Someone else is paying that price right now and this price is steeply increasing.

This blog summarizes a report written by Parineeta Dandikar, published by SANDRP and entitled, Shrinking and Sinking Deltas: Major Role of Dams.