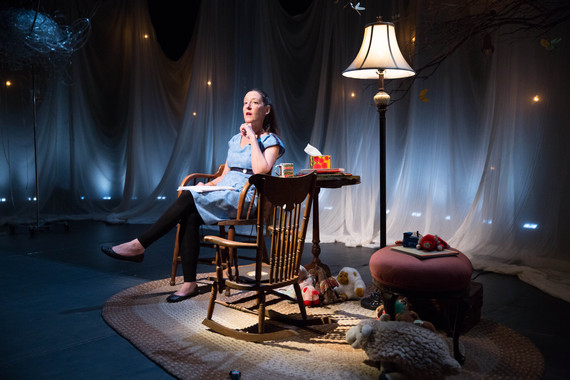 I've noticed it's hard for me to get to the point. That's because I don't see one.
There is no bitterness whatsoever in that statement.

Playwright-actor Deb Margolin's new solo performance piece, 8 Stops, mines the unique experiences of one woman fighting to stay alive. In the process she delivers a darkly comic, deeply affecting exploration of the meaning of life. I learned a few things in conversation with the OBIE winner, teacher and cancer "parolee":

1. She wasn't afraid of dying.

I'm a person who rehearses their surprises; I like to figure out these ontological fire drills. Okay, if things get really nasty, what am I gonna do? It was not depressive thinking; it was planning.

Death isn't even real to young people. It doesn't register on any level. It's sort of like climbing out of a swimming pool, and your weight comes to you little by little. With each step you realize how much you weigh. Mortality comes on you that way -- if you're lucky.

After years searching for a way to talk about the surreal process of undergoing a stem-cell transplant to vanquish Hodgkin's lymphoma, Margolin was working on another piece at "powerhouse" Dael Orlandersmith's writers' residency when 8 Stops sprang into being.

"I've used theater consistently as a way of working through intense personal experience, and creating, [out] of a group of very kind but random people, a sort of citizenship of generous witnesses," says Margolin. Orlandersmith "told everybody to invade their own privacy," and to Margolin's surprise: "I ended up making the connection between my son's fear of what death was, and my actual experience during the stem-cell transplant -- the endless corridor of darkness and nothingness." Though her son's traumatic fantasy of death mirrored what she went through, "fear is for the living," Margolin reckons. "Death's probably not that bad."

We live in Montvale and not a single person there cares if we live or die, but we awake each day to window frames that look like the frames of paintings, the trees posing tall and thin as live fashion models for the designer of each season, who dresses them now in green, now in pastel, now in cherry blossom, now in mountain laurel, now in the cold whites of winter.

3. She swore she'd never live in New Jersey. She now lives in denial.

I'm the kind of person that anything I make fun of, it happens to me. Whatever I send up, I become. When I was a young performance artist going from club to club, they'd say, 'How do you want to be introduced?'

I would say, 'Our next performer, Deb Margolin, gets a headache the minute she crosses the state line into New Jersey.' So now I live there. And I have headaches all the time.

Among its tales 8 Stops shares the perverse beauty of life in the least-glamorous house in a moneyed enclave.

I've never felt so stared at, so looked at, so observed as I have by my children, particularly when they were very small and everything I did was noticed, in terms of a clue as to how life gets lived, and the correct way to deal with other people, with adversity, with a wind that pulls up your skirt... You're on all the time when you have a kid.

It was the "ferocity of the love you feel as a parent" that surprised her most: "By the time I had a kid, I'd loved people in lots of ways. I didn't think I could be taught a different kind of love on that level. It was stunning." Also rich fodder for comedy: "It exposes your flaws instantly and profoundly."

I brought this baby home...I was 38 years old and I didn't really have any friends who were babies...

5. She never imagined she'd be a mother.

"At 38, 40, almost 41 -- that's as fast as I could do that. Life is rushed. I mean, life goes by very fast. You're supposed to get an awful lot done in a very short period of time." Sixteen years teaching at Yale provides another form of parenting: "The kids are smarter than I am, but I'm older than they are."

6. Empathy runs in the family.

Margolin has a flair for merging polar opposites, like the blessing and curse of "the grief of endless compassion," a phrase that recurs in the show. "I wouldn't trade it," says Margolin. "I don't think my son would trade it... He senses the discomfort of other people and seeks to ease it. His life is made a lot more complicated by it, but I think on the main it's a gift."

My father worships God without the slightest respect for the concept of God, and I feel the same... Atheists who pray all the time.

7. She likes a challenge.

The most satisfying part of creating 8 Stops?

Finally having found language, after trying to get language to meet me under a streetlight for a cigarette for so long, to describe this experience... The putting together of grief and joy, in equal measure...

Performing this piece is like one of those long programs in the Olympic ice skating solo thing, where you have to make these leaps, you have to anticipate them, you practice it many times -- then in performance you either hit it or you miss it.

The challenges are the rewards, it turns out: "They reside in the same place."

In love with life, on the phone all night, running barefoot in the moonlight to a friend's house, listening to the Beatles' White Album, no appointments, just raw impulse.

8. She's grateful for everything that's happened to her.

In the throes of fighting for her life, Margolin revels in vivid memories of her youth, unscheduled raptures far from the enforced multitasking of today. And where she now finds herself is where she would have hoped to be -- "Not exactly in this form," she says, "but I am in most ways living the life I dreamed of living." The show she re-creates nightly with wit, warmth and whirlwind precision is many things: "It's a prayer, it's a shriek of affirmation, it's a cry of joy and gratitude," says its creator. As for her dream for how audiences will see it: "My greatest hope is that while we're talkin' death, we make people laugh their asses off," says Deb Margolin, exiting the stage.