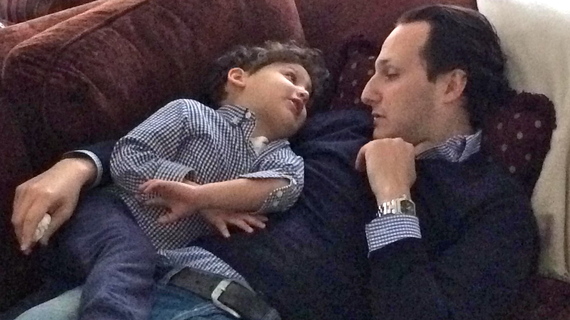 Big changes are afoot Down Under. And these presage changes in the U.S. and Europe as well. For the past few years, a research report issued by the office of the Australian Attorney General, with statements of its lead author, has exerted a disproportionate impact on the lives of young children whose parents are separated. Bucking the trend to keep both parents regularly involved with their children whether or not the parents live together, Australia's guidelines, widely adopted in the U.S., have discouraged allowing young children to spend overnights with both parents after separation. In most cases such "blanket restrictions" mean that mothers do all the caregiving at night.

But all this is changing. Practically overnight. Australian professionals are shredding their guidelines in the light of two recent papers exposing the flawed science behind denying young children the pleasure of their dads' bedtime stories. A balanced view of the research data supports common sense. If young children can take naps during the day under their fathers' watchful eyes, they can sleep at night in their fathers' homes. If young children can be apart from their working mothers all day long, they shouldn't be deprived of quality time with their dads during the night.

Strong parent-child bonds begin at birth -- for mothers and for fathers. Caring for children at night and being there in the morning is part of the process of developing a solid relationship. The more time parents spend with their infants and toddlers, the better able they are to read their baby's signals and respond sensitively to their children's needs. In two-parent homes we encourage hands-on shared parenting night and day. It takes nothing away from mother-child relationships when dads change diapers and bathe babies.

One of the game-changing papers, I am proud to say, was mine. But I had a lot of help with it. The manuscript was improved, vetted, and endorsed by 110 scholars, from 15 countries, who are at the top of their professions: Professors Emeriti, Deans, former Presidents of professional associations such as the American Psychological Association, and department heads. Collectively the group have about 10,000 publications to their credit. We were united in wanting to make a public statement about where science stands on the issue of young children's needs following their parents' separation. Our goal was not just to clarify the accepted, settled science. We wanted to ensure that reliable science plays an important role in policy and decisions about young children's contacts with each parent. Read about the consensus report here.

We reached two main conclusions. First, just as we encourage parents in intact families to share care of their children, the social science evidence on how healthy parent-child relationships normally develop, and the long-term benefits of healthy parent-child relationships, supports the view that shared parenting should be the norm for parenting plans for children of all ages, including very young children. Second, restricting fathering time to daytime hours until children enter kindergarten is not the best arrangement for most children if we want to give them the best chance for normal relationships with their fathers. We favor, not discourage, overnights for young children and find no reason to postpone overnights until children are four-years-old.

The second paper, by Linda Nielsen, dissects the process by which the Australian research translated into worldwide prohibitions against father-child overnights. The American Psychological Association published both papers. Read about the stir they are creating here.

Naturally shared parenting is not for all families. Regardless of their children's ages, parents should consider a number of factors when creating the best parenting plan. What works for a child in one family, may not be best for another child in another family. Our recommendations apply to most families. The fact that some parents are negligent, abusive or grossly deficient in their parenting -- parents whose children would need protection from them even in intact families -- should not be used to deprive the majority of children who were being raised by two loving parents from continuing to have that care after their parents separate.

It is time to resolve our ambivalence and contradictory ideas about fathers' and mothers' roles in their children's lives. If we value Dad reading Goodnight Moon to his toddler and soothing his fretful baby at 3 a.m. while the parents are living together, why withdraw our support and deprive the child of these expressions of fatherly love just because the parents no longer live together, or just because the sun has gone down?