In fact, the world recently got two more ligers. According to 9news, a Manchurian tiger gave birth to three cubs on May 13th, two of which (one male, one female) remained healthy and survived. The cubs' father was an African lion.

You can see the hybrids for yourself in the video below.

Lions and tigers are able to mate because they are members of the same genus, though they do not share the same species classification. Whether or not the liger cubs will be able to reproduce remains to be seen, but it is not unheard of.

Lion and tiger mating only occurs in captivity, according to National Geographic. Chinese state television reported that there are only about 20 ligers in existence.

Ligers themselves are massive creatures when they are fully grown.

The faintly striped, shaggy-maned creatures are the offspring of male lions and female tigers, which gives them the ability to both roar like lions and chuff like tigers--a supposedly affectionate sound that falls somewhere between a purr and a raspberry.

Weighing in at about a thousand pounds (450 kilograms) each, they typically devour 50 pounds (23 kilograms) of raw meat in a meal.

You can also check out some fantastic pictures of ligers here, from National Geographic. 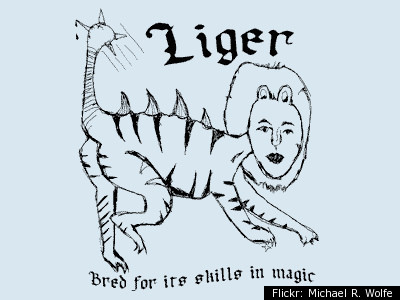