Every year in the U.S. history survey course I discuss the historical significance of 9/11 with my NYC-based college students. This year, however, one class member confided that the tragedy resounding for her would always be the deaths of the children at Sandy Hook school, in her hometown of Newtown, Connecticut.

As we mark the anniversary of that heart-breaking event of Dec. 14, 2012, her words echo in my mind and prompt me to re-post the meditation I wrote at the time, "Light in the Darkness." Moreover, as I write this post in anticipation of the sad December 14 anniversary, I recall that today, Dec. 10, is an important date for Thomas Merton, an inspiring figure I invoked in that 2012 essay, who passed away December 10, 1968 (and entered the Abbey of Gethsemani December 10, 1941.)

May we endeavor to keep the light alive in our hearts and work toward a safe, peaceful world. My 2012 meditation "Light in the Darkness" is below.

In the circle, meditating in the darkness around a candle, every Monday night we sit in silence. We allow random thoughts and feelings to float through our heads, and when we find anything grabbing our mind's attention, we just take a deep breath or repeat to ourselves one sacred word, and go on -- go on together in the great silence.

The silence is followed by a brief passage, and on this December night the selection is read by Els, a university administrator, her lilting, Dutch-inflected voice beginning with the words, "There were shepherds abiding in the fields, keeping watch over their flocks by night, and the angel of the Lord came upon them..."

Such elemental words, going back to childhood, and yet such a strange image. Ever since my early teens I have wondered how we Catholics could believe in the Incarnation or Resurrection when we consider the Creation story symbolic, with the world certainly not formed in the space of a week! As I mull over all this, Els gently invites us to comment on anything that may have touched our hearts.

Jane speaks of this baby, of the Savior coming as such a weak thing, of us not having to look to kings and powers for our solace. This trumps my vexing thoughts, somehow, for she speaks out of a deep truth, almost as if I were hearing the Dalai Lama, or his soulmate Thomas Merton.

Jane would laugh at the very idea. She is best known as the mother of many and grandma of many more. She knows that you would not likely notice her on the street, but as our meditation leader she has a grace about her, born of years of loving devotion to others and to this spiritual practice. And I bet that the Dalai Lama and Merton as celibates would value the ways her love draws on her deep parenting experiences -- especially right now, with our holiday season darkened by the massacre of "those babies," as Jane referred to them. 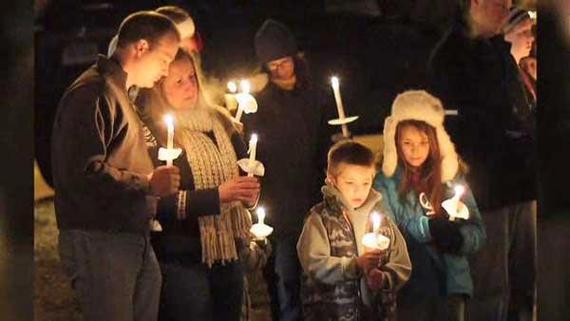 As we move to the close of our session with the recitation of the Lord's Prayer, Father Byrne appears. He participates whenever he can -- just another spiritual pilgrim. Tonight he greets us with that warm, strong, life-affirming voice of his, but the chemotherapy has laid him low, such that he enters the room bent over, precarious. He will have to give up the pastorate soon, he tells us, and he makes the point that this meditation has brought many graces to the parish. "Keep up the practice, if you can."

"We promise," I reply. As we hold hands in our circle, we ask God's blessings on all the world, my left hand in that of Steve the psychotherapist, my right in the warm, trembling hand of Father Byrne, that veteran of so many prayers, and so many causes for justice and peace.

Only as we are breaking up do I notice that a longtime member has returned to us after a prolonged absence: Thelma, originally from the Dominican Republic. She has been kept at home much of the time caring for her chronically ill husband, but here she is, looking not at all haggard, in her bright lipstick and even brighter smile. I suspect a pollster would find many of her policy views to be at odds with mine, but that matters not as we embrace and bond anew.

Communion: that's what it is, a rare kind of communion, born of this simple but profound spiritual practice. I am reminded of something the poet James Autry told Bill Moyers in an interview:

People ask me now, "How are you doing?" and I say, "Considering everything there is to complain about, I have no complaints." So it was partly that, and partly my own need to bring some sort of calmness in my life. ... I would walk in the morning. I'd come back and be all agitated about the war or the politics. And I thought, "You know, this isn't supposed to be healthy I don't think." So it evolved into a gratitude walk and where I try to just make it like a meditation.

Driving home, reflecting on all this, I choke up, then find myself singing "There were shepherds abiding in the fields, keeping watch over their flocks by night..." from Handel's transporting Messiah.

Amid our doubts, in the midst of our darkness, there is the promise of light and life.