The silver ribbon of stars that wraps the night sky has long been an awe-inspiring sight for anyone who cares to look up. But that’s not the case anymore for people who live under a fog of light pollution.

A new analysis using satellite data and sky brightness measurements has found that the Milky Way is hidden from more than one-third of humanity, including 60 percent of Europeans and nearly 80 percent of North Americans. The research was reported Friday in the journal Science Advances.

The researchers calculated several degrees of light pollution, starting from the level at which artificial light obscures astronomical observations up to the level at which the midnight sky is as bright as it is at twilight. Their calculations show that more than 80 percent of the world and more than 99 percent of U.S. and European populations live under light-polluted skies.

This level of pollution may have negative consequences, ranging from harming animals’ life cycles to affecting human health and even psychology by taking away one of the most positive experiences that’s naturally available, experts said.

There Are Now People Who’ve Never Seen The Milky Way

The proliferation of light pollution started in the 1950s and 60s and has continued to expand every year, said Chris Elvidge, a scientist with the U.S. National Oceanic and Atmospheric Administration and a co-author of the study.

"For several generations, people in large urban centers have had their view of the Milky Way blocked," Elvidge told The Huffington Post. “This is an aesthetic loss, and perhaps a spiritual loss in terms of feeling a connection to the cosmos.”

Losing that connection could have major consequences when it comes to psychological health. The night sky presents one of the few universal situations in which all humans can experience a profound sense of awe. And awe, psychologists are increasingly finding, is a special emotion that can impact our cognition and behavior in unique and unexpected ways.

“Fleeting and rare, experiences of awe can change the course of a life in profound and permanent ways,” wrote Dacher Keltner and Jonathan Haidt in 2003 in one of the first psychological looks on this long-neglected emotion. Reviewing historical examples of people whose lives were transformed thanks to awe, Keltner and Haidt suggested that “awe-inducing may be one of the fastest and most powerful methods of personal change and growth.”

That’s why losing the chance to gaze at a vast sky may not be a small matter.

“The bright night sky and its stars has long been a profound source of awe and inspiration, which we know to stir creativity, generosity, good will and innovation,” Keltner told HuffPost. “Losing a clear night sky will harm our capacity for wonder and put a dent in our spirit of common cause.”

For several generations, people in large urban centers have had their view of the Milky Way blocked. This is an aesthetic loss, and perhaps a spiritual loss in terms of feeling a connection to the cosmos. Chris Elvidge, NOAA scientist

In more recent investigations of the effects of awe, researchers have elicited the emotion in the lab and observed that people’s perception of time appears to expand. Compared with people experiencing other emotions, those who experienced awe felt that they had more time, said Melanie Rudd of the University of Houston. “As a result, they started doing things that are good for your subjective well-being, like helping others and choosing experiences over material goods.” Having a greater perception of time and being present is particularly important in today’s culture, because people often feel rushed, Rudd said.

Rudd and her colleagues have also found that the best way to elicit awe in people is by putting them in nature -- at the foot of the Swiss Alps or on top of the Grand Canyon, for example. But for people who live in large, populous cities and don’t have a canyon in their backyard, looking at the night sky is one of the few ways to evoke the feeling of awe.

“The sky is right there. It's very accessible,” Rudd said. “But if the light pollution is getting in the way, then you are taking away a very nice source of awe for people."

Where Can We Still See The Milky Way?

Even at a distance, pollution from large cities casts a wide curtain of brightness on surrounding areas. “Light pollution is one of the most pervasive forms of environmental alteration,” the researchers wrote in their analysis of global light pollution. “It affects even otherwise pristine sites because it is easily observed during the night hundreds of kilometers from its source in landscapes that seem untouched by humans during the day.”

Even protected areas such as national parks are not entirely safe from glimmering cities far away. For example, light from Las Vegas and Los Angeles can be seen from Death Valley National Park, the researchers wrote.

The researchers created an atlas of global light pollution that can be seen above, using dark gray to mark light-polluted sites that should be protected from future light increases. If sites are marked in blue, that means the sky is too bright for astronomical observations. Areas marked in yellow are places where people can’t see the Milky Way in the winter, and orange means even the brighter summer Milky Way is obscured by artificial light.

In areas marked in red, the night sky is as luminous as it is at twilight. “This means that, in places with this level of pollution, people never experience conditions resembling a true night because it is masked by an artificial twilight,” the researchers wrote.

The most light-polluted country is Singapore, where people live under skies so bright that the eye cannot fully adapt to night vision, the researchers said. Other countries with high levels of light pollution include Kuwait, Qatar, United Arab Emirates, Saudi Arabia, South Korea, Israel, Argentina, Libya, and Trinidad and Tobago. Countries with populations least affected by light pollution are Chad, the Central African Republic and Madagascar.

In Western Europe, only some areas -- most of them in Scotland, Sweden and Norway -- still enjoy a dark night. Among G-20 countries, Saudi Arabia and South Korea have the highest degree of light pollution, while India and Germany are exposed to the least light pollution.

In the United States, "the western U.S. and Alaska have the largest blocks of undeveloped, unpopulated lands where the night sky has largely been preserved,” Evlidge said.

For those who’d like to take a short break from the city for a stargazing trip, Elvidge suggests getting about 100 miles out.

Most Of Us Can't See The Milky Way Anymore. That Comes With A Price.
Stunning Milky Way 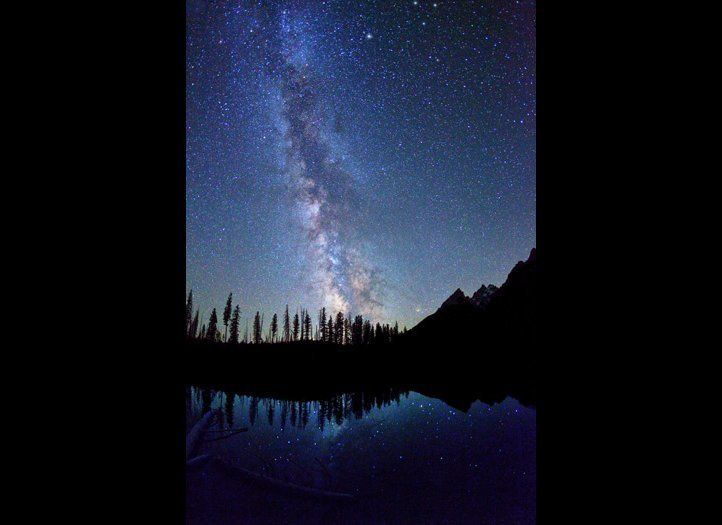