It's been four months since the ban on incandescent light bulbs officially went into effect, which means that stash you've been hoarding (if you're a fan of incandescents' warm glow like we are) is probably running low. Before you head to the lighting aisle for a replacement (where you're liable to get lost in the sea of CFLs and LEDs) here's everything you need to know, courtesy of Dave Geraci, Product Manager for Technical Consumer Products, Inc.

Halogens, CFLs, LEDs? What does it all mean?
Halogens look the most like the incandescent bulbs, but they offer the least value. CFLs have been around a while and offer a good value in regards to lumen output and life. And while today's CFLs have solved some of the issues from when they first came out 15 to 20 years ago, there are still some drawbacks. For example, their light makes colors appear dull and unnatural. They also take a while to turn on and do not dim, or dim poorly, with visible flickering. CFL bulbs also contain mercury, which can be dangerous if broken and are difficult to dispose of when they burn out. LEDs offer good light output and longer life, however they still cost more than the CFL options, [though] prices are steadily falling and will continue to do so as the technology improves. Unlike CFLs, the LED bulb is dimmable, allowing you to adjust the light for the mood, and it does not contain mercury.

Here's what each one looks like, including incandescents, the CFL and LED, from left to right. 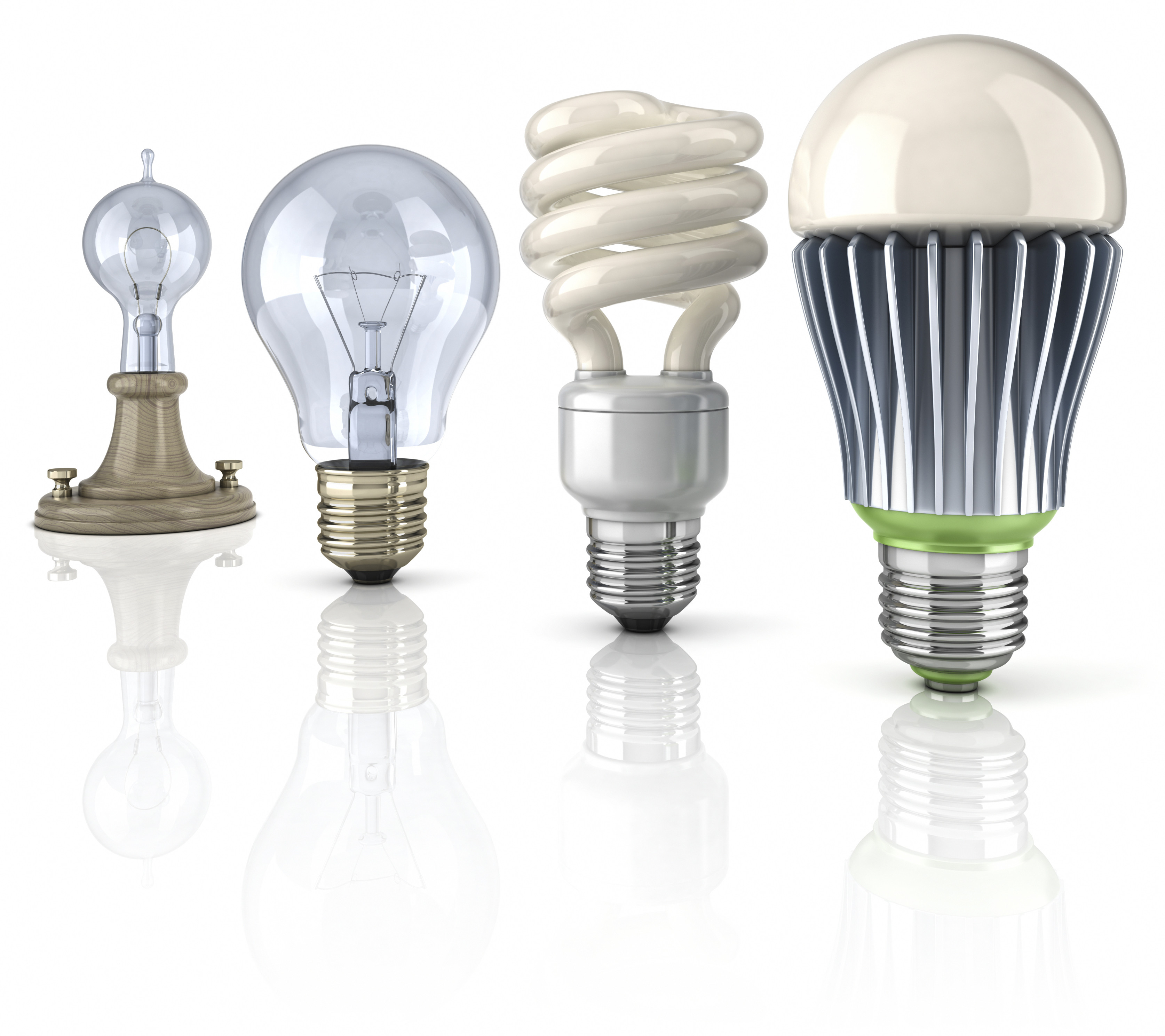 Most of us know how the old watt measurements work (and how they look in a particular space), but how is the luminosity of the new bulbs measured? Is there an easy way to convert watts to lumens?
In short, yes. And here's an easy infographic from the FTC to prove it. 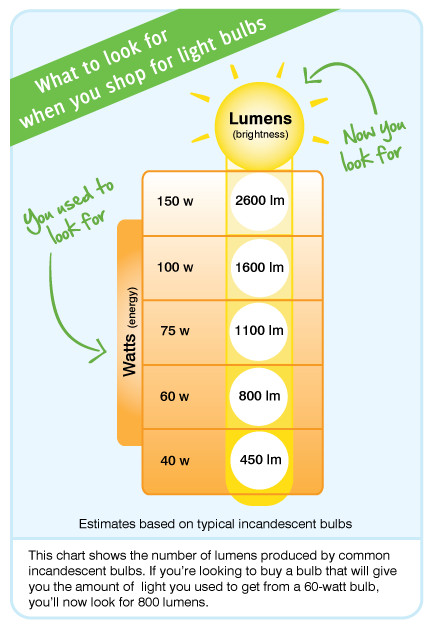 Typically, a CFL or LED use about 75 to 80 percent fewer watts than the corresponding incandescent bulb. Also, most manufacturers disclose on the packaging what the bulb's incandescent equivalent would be, making it even easier to find the right bulb, so you don't have to do any calculations. A good CFL or LED produces 65 to 70+ lumens per watt vs. incandescents, which were around 15 lumens per watt.

Which type of bulbs do you want to consider for different parts of the house (i.e. kitchen, bathroom vanity, bedroom, etc.) and why are they a better choice in those areas?
CFLs come in all shapes and sizes. For example, you can get a CFL globe for the bath vanity, which matches the old incandescent globes in size, looks, and light output. For recessed cans, which you might have in your kitchen or basement, floodlights are available in both CFLs and LEDs. LEDs also come in a variety of shapes -- including chandelier size -- and that selection is growing every day.

How long do these new bulbs last compared to the old ones?
CFLs are usually rated for 8000 to 12000 hours of life versus incandescents, which were in the 750-1000 hours range. Decorative incandescent and floodlights were rated 1500 to 2000 hours, a little longer, but still not up to CFL standards. LEDs are rated even longer -- typically 25,000 hours -- which translates to more than 20 years with average use at about three hours a day.

If you're still confused, you'll find most of what you need to know right on the light bulb label. Here's how to read it. 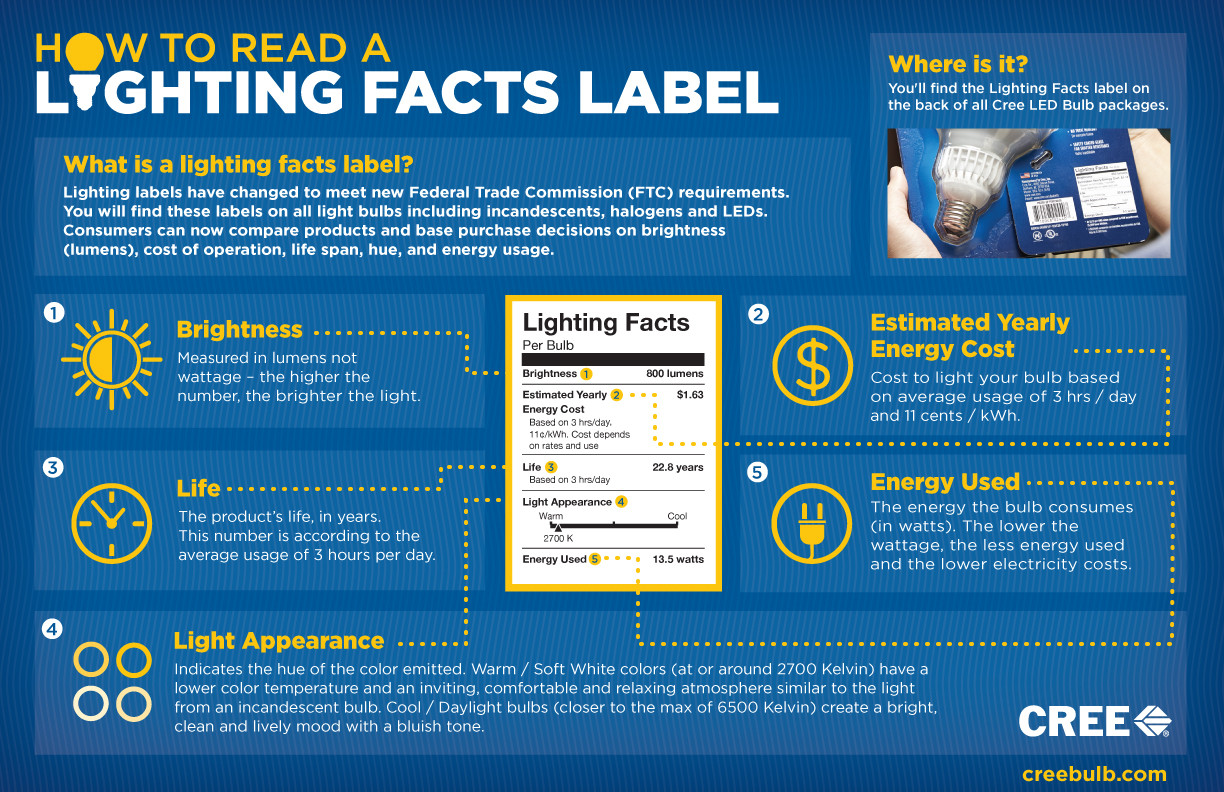