The exhibition Lightning Strikes: 18 poets.18 artists. -- at Dolby Chadwick Gallery through January 30th -- has its roots in the idea of ekphrasis: poetry that describes or responds to a work of art. Conceived and organized by gallery director Lisa Dolby Chadwick, the exhibition isn't about artists creating illustrations of poems or even about collaboration. Instead, by generating what she characterizes as "thoughtful pairings" Chadwick wanted to see if she could make "lightning strike" in the form of flashes of inspiration. Coming from her conviction that poetry is not as widely represented or supported as it should be in contemporary culture, Chadwick wanted bring together a diverse group of poets and artists to open up a fresh conversation about how the verbal and the visual can interact with each other.

Charlie Pendergast, one of the participating poets, describes the project as being "conceived in that fortunate space where two passions meet to willingly inspire each other." Lightning Strikes is also, in his view, an opportunity to "nurture our greater intentions as artists, as believers in art, in a more powerful community."

During the development stages of the project, Chadwick worked as a kind of matchmaker, contacting both poets and artists and working out details:

After receiving a poem I would reflect on the tone and quality of the writing and would suggest an artist who's work naturally had a dialogue with the poet. There was a lot of back and forth: getting many of the poets to agree to the project was much more challenging than I had anticipated. Because of my long relationships with artists it was an easier call and most gave an enthusiastic 'yes'. One of the artists told me after the fact they were dreading the project but when they received their poem they felt inspired and excited to contribute.

With some of the poets, I started out by working with their agents or managers, trying to explain the high integrity of the exhibition. For example, with poet Billy Collins, I initially worked with his agent, and although Billy very generously agreed, he was less than enthusiastic. After sending a few ideas about artists he got inspired and offered a different poem. Even though a few poets initially were skeptical and had questions -- for example 'Is my poem going to be collaged into the art?' -- in the end they all had good experiences and I think were happy with the exhibition and book.

For the opening of Lightning Strikes, 15 of the visual artists were present and 14 of the poets read, reciting not only the poem that had been paired with a painting, but also one additional poem. Lawrence Ferlinghetti, the 96 year old poet/painter and co-founder of "City Lights" bookstore attended, but wasn't feeling well enough to read. It was, for everyone involved, a momentous occasion.

Below: A collage by Matt Gonzalez paired with a poem by Truong Tran 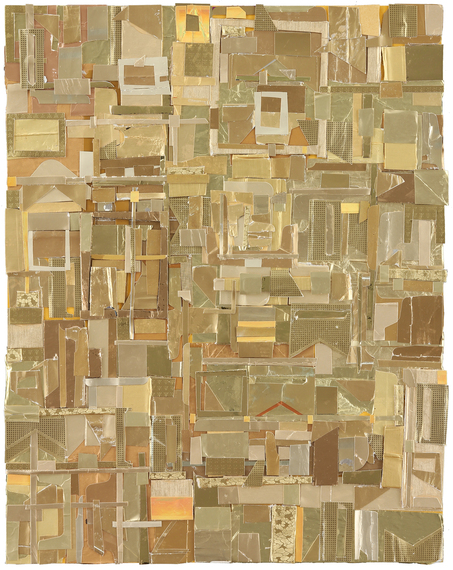