WASHINGTON -- At 5:30 a.m., retired ornithologist Jim Tate, who specializes in woodpecker tongues and public policy, is sitting on a ledge in the dark, holding a butterfly bag in one hand and a male yellowthroat in the other.

"It probably traveled in from Mississippi," says Tate, who examines the bird, then lets it go. It flies away.

The group gets into Tate's red van to travel downtown, checking a handful of other buildings that are known to be especially dangerous to birds. They work in the morning before the dead birds, who hit the buildings after a long night of flying, have been carried off by predators or swept away by enthusiastic maintenance workers. It is still dark.

It is well known by now that illuminated buildings -- especially glass buildings -- are deadly for birds. The commonly given statistic is that somewhere between 100 million and 1 billion birds die every year in the U.S. from crashing into buildings and other human-made obstacles.

Tate and the others belong to a group called City Wildlife that monitors dead birds through a program called Lights Out D.C. The group hopes that data on the accumulation of dead birds will encourage buildings around the nation's capital to turn off their lights at night during bird migratory seasons (September and October in the fall; April and May in the spring).

The Thurgood Marshall building, with its huge glass-fronted atrium, used to be D.C.'s most dangerous building for birds. Thirty-six dead birds were found there in 2010 -- more than at any other building. According to Anne Lewis, president of City Wildlife, that number went down substantially once the Architect of the Capitol agreed to turn off the building's lights at night during migration season in 2011.

Advocates point to the success of lights-out programs in other places, and say as many as 80 percent of the birds now dying from colliding with buildings could be saved with similar campaigns. Fuisz says that the group has found some tentative political allies, but that they are concentrating their efforts -- for now -- on collecting birds.

Most of the buildings City Wildlife is checking -- including the Hart Senate Office Building, 300 New Jersey Ave. NW and the Cato Institute's Massachusetts Avenue headquarters -- are coming up empty; no dead birds and no stunned birds. A disembodied wing is spotted by one building is not counted. The group counts only whole birds, not "bits and pieces," Fuisz says.

At D.C.'s bright, glassy Walter E. Washington Convention Center, Fuisz finds a whole bird -- a small greenish ovenbird, considered one of D.C.'s "Species of Greatest Conservation Need." She picks it up off the sidewalk. (Dead birds are photographed and labeled, then stored in an outdoor freezer.)

Fuisz then spots a bright red bird in the middle of 9th Street NW. She dashes into the street without checking for traffic. The bird is alive, but isn't moving. Fuisz picks it up.

Under the convention center's glass skywalk, Yeaman finds another bird -- a dead indigo bunting. He puts it in a plastic bag.

"It is really sad," Fuisz says, "to have flown thousands of miles, only to die on the streets of D.C."

So the evidence may not yet show an overwhelming bird problem in the District, and turning off lights won't even save all birds -- bright lights are only one of several features that make a building treacherous. But "so many environmental problems are so complicated to solve," says Fuisz, at 7:30 a.m., as the group is saying goodbye. "This won't eradicate the problems. But it does cut down on bird deaths. It seems like it's very effective to turn off lights."

Jim Tate sent an update via email later in the day: "The scarlet tanager flew strongly into the woods across the street from my home in Glover Park," he wrote. "I consider it a success when we can release two birds and only find two dead birds." 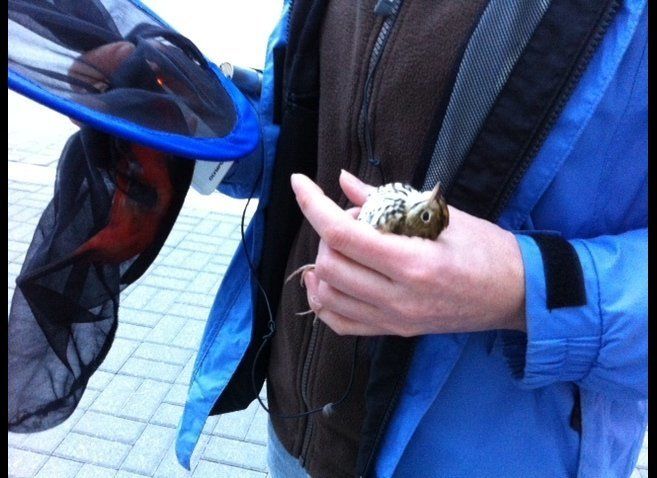