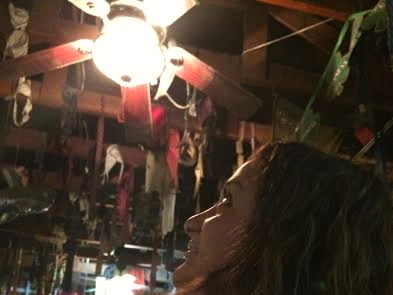 It's one in the morning, and I'm sitting at a local, hole-in-the-wall bar with decor consisting of bras and ties hanging from the ceiling - courtesy of the bar's clientele. My inner dialogue is overflowing with commentary. The feminist in me is thinking, a man gives up a tie, and a women gives up a bra? I assume, in the liberal, considerate county of Marin in Northern California, the bar's owner must've mixed in ties with the bras, to avoid any feelings of sexism and inequality. But still I wonder, why none of these drunken men in an impulsive whim have thrown a pair of tighty whities on the bar's ceiling?

My first formal introduction to bras (not counting me trying on my mother's and stuffing the cups with toilet paper) was when my Grandmother and Papa took me to Kmart to get a training bra. Most things of the female variety didn't make me uncomfortable as a kid. Somehow, I was totally self assured when it came to what most young girls would find humiliating, such as my grandfather accompanying me to purchase my first bra. BUT, I did think to myself and vocalize (my lack of filter started young) "Why are you taking me to Kmart to get my first bra?" I mean can't we make the first bra buying experience, a little more glamorous? What about Bloomingdale's? Saks Fifth Avenue? Where at least I would get to carry around a fancy shopping bag, and possibly grab some free make-up samples? Were my new, little boobs not worth the financial investment?

Speaking of financial investment, bras are not cheap. And I've been racking my brain, trying to understand what women, no matter the age, would frivolously throw out such expensive undergarments, especially when like a man, a good bra is hard to find.

I first learned of the high price of the brassiere, by taking my mother's advice. I was living in New York City working in fashion, and felt like I looked dope in my clothes. According to my mother, it was what lied beneath my stylish exterior that needed work. My mother taught me to make sure you wore nice panties, just in case -- in case in her mind, I had to be rushed to an ER and a staff of medical professionals had to rip my clothing off in an emergency.

Back to the brassiere... one night walking back to my apartment, my mother told me that I must get "sized." "Sized, what does that mean, Mom?" My mother explained that it was in my best interest, after she saw the ill-fitted bra I was sporting, to get bras that fit me properly. She gave me the name of a women at Bloomingdale's and told me to make an appointment. Being that my mama was usually right and honest, I realized that maybe I was squeezing my breasts in bras meant for those females who could wear tiny triangle bikinis without breast spillage -- let's face it, that wasn't me. I needed underwires in my bras, and it was time to pay the price.

The Bloomingdale's salesperson greeted me, and offered me a drink. I figured she was trying to relax me, after all, it was about to get intimate between us. I took everything off, except my underwear. She told me I could leave on my jeans, but I figured she would need to see the entire picture to pick the perfect bras for my body. She measure and cupped my breasts with her bare hands. She returned to the dressing room with a boat load of bras, in a brand new size. A size in which I didn't love, let's just say it ended with double DD. The only thing that got smaller was my back.

She made me bend down and taught me with instruction, how to shimmy my breasts into the cup. She also took her hands and grabbed my breasts and aggressively shoved them in my new, large cup size. After that exercise in heavy petting with a Bloomingdale's sales person, I or actually she picked 4 or 5 bras that fit well. I put on my clothing and my old, crappy bra and headed to check out.

Did I mention, I never looked or asked the price of these bras? I am pretty sure, this was the first time in my adult life, where I made such an "adult" purchase, besides tampons. "Mara, your total is $496.50, will you be paying with your Bloomie's card?" I gasped, What the hell is this, a sick joke? And now it was confirmed why my Grandmother took me to Kmart for my first bra, these designer bras were a fortune.

I kept thinking, I wanted this amazing, vintage leather jacket that was $400.00, and I'd been thinking about it -- now I was spending more on something only my breasts could enjoy. But at that point, I couldn't back out -- I was immersed in the interaction and the sale was about to end. This woman just spent two hours feeling me up and spent extra time having to give me validation that I was not fat, only large busted. It was times like these, where I wondered how I had the guts to let a salesperson at Bloomingdale's feel my boobs, but couldn't be assertive and back out of a purchase way out of my budget. Like a total wimp, I kept two of the bras and returned the rest and prayed that I wouldn't see the same salesperson. I know we can all relate to that panic.

So this is why I wanted to get in the mind of these "bra tossers." Knowing the effort and cost that goes into bra purchasing, how could one frivolously and permanently toss one on a dirty ceiling? Not to be an ageist, because anyone can toss their bras on a bar ceiling, but in case your inner voice is reading this and thinking, this writer is so out of touch with what "the kids" are doing these days, I'll have you know, the demographic was wide, and these "bra tossers" came in all ages, shapes and sizes. And not one of them had a tag from Kmart.