In Luke 1:41-44, John the Baptist leapt in Elizabeth's womb when Mary shared the news of her immaculate conception. It was not a random event, but an intentional one and lest Mary think that she did not yet have a child in her womb an angel named Him, Jesus. Both of these women were already mothers.

In Psalm 139, the psalmist proclaims that he was knit together in his mother's womb, proclaiming that God was active from the beginning hand crafting a gift for the world in the form of a person yet still inside an expectant mother. This truth applies to every person in history and in the future.

So no wonder when Priscilla and I lost our first child, we grieved like we lost our first child. Because we did. Our baby was not something to be handled, a problem to be solved, an "it" to be gotten rid of, an inconvenience or a stumbling block on our career paths. He or she was gifted by God to enrich our lives and the lives of all that she or he would encounter. He or she was not an it. And to make her or him any less than that is to deny the fundamental truth that every person no matter how small is literally made by and in the image of Almighty God. To say that losing a child unnaturally or on purpose is anything less than a death is to say it is not a life when God clearly has states otherwise. 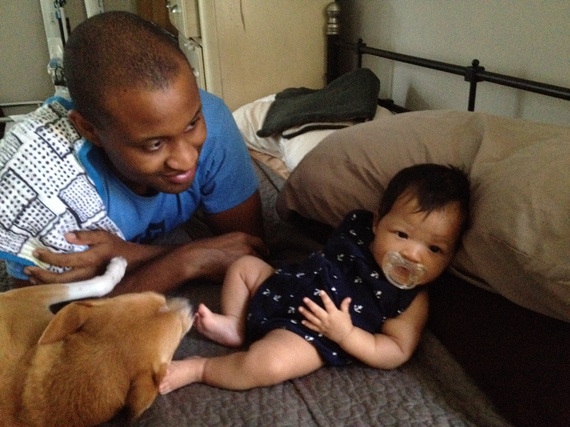 The last three years, Priscilla and I have lost and lost. And it left us with the fear that there will always be more losing. Why would we be worthy of anything good? The grief was like a growing block of ice in the middle of our living room. It was cancerous and metastasized, spreading itself to the corners until we are working our way around it at all times. Sickness and death are not accommodating.

That is unless we embrace it. Pray. Go to therapy and counseling. Write things down. Talk to friends, family, one another. Pray more.

We must choose courage and not cowardice again and again. We decide shout the expletives when they come not stuff the anger behind smiles and inspirational quotes. We feel the deep feelings that are brought on by the lack of a Mom, Ba, Baby, two aunts, and a cousin.

But damn it's hard to stay close to something so cold for so long. It takes a certain kind of bravery to hold on to reality that every life no matter how small or how long is significant when it's gone. The truth is heavy so it's just easier to pick up other things. Lord have mercy.

So here's my attempt to hug my Mom's death. My aunt's death. My Baba's death. My baby's death. To hold them so close that they begin to break down into ice cubes and then a liquid and eventually a vapor that is ever present but not in the way.