Whitney was only 11 when I was diagnosed, a month before my 39th birthday. Her brother was 5 ½. He was too young to understand what was happening at home then, too young to remember it now. But not my Whit. In fact, the irony didn't escape me that my little girl was in the process of developing her own breasts just as I was losing mine.

Soon after my bilateral mastectomy, after my breasts were removed, but before the implants were inserted, Whit and I went shopping. We were in the fitting room and when she removed her clothes to try on a shirt, she turned away from me. She was already wearing a bra, but even still, it was clear she didn't want me looking at her. She hunched up her shoulders and drew her arms inward, protecting her modesty. I took this as an opportunity to joke with her a bit about the fact there was no need to be shy with me or embarrassed about her changing body. "I've seen it all, remember? I'm the one who changed your diapers." And that's when she hit me with the question: Could she see? I didn't get it at first. Maybe I just didn't want to get it. Or maybe I was still a little foggy from my most recent dose of chemotherapy. "See what?" I asked. "Your chest," she replied.

My breasts still bore the angry red scars from my bilateral mastectomy. I couldn't stand to look at myself; how could I show her? But I'd just mini-lectured her about not being shy about her body and her developing breasts. Could I really be so hypocritical in all of three minutes? Also, I didn't really have breasts. Under my flat chest were tissue expanders -- place holders, if you will. These devices were inserted immediately after my breasts were removed, while I was still in the operating room. The expanders were filled, a little bit at time, every few weeks, with saline solution. The ever-growing expanders were intended to stretch my skin gradually, until the region could accommodate respectable "B" sized breast implants (in spite of my husband's not-so-subtle hint that I consider going larger). The swap-out of the tissue expanders for the implants was still many, many months away. Consequently, while I wasn't as flat as a proverbial board, I was oh, so close -- and Whit wanted to see.

My hands shook nervously as I slowly unbuttoned my shirt, taking care to keep myself covered. When I got to the bottom button I looked at Whitney, but we didn't make eye contact. Her eyes were fixed on my still-hidden chest. "Here you go," I said and quickly pulled open my shirt. As she took in my mutilated torso, with scars that hadn't yet begun to fade, Whitney's eyes grew large; the look on her face said it all: She was horrified. We made brief eye contact before she shifted her gaze to the floor. As I rebuttoned my shirt, I tried to think of something reassuring to say and I found myself parroting the words of my reconstructive surgeon: "I know it doesn't look so great now, but it's going to be terrific in the end. I'll look normal again; maybe even better than normal!"

That's when the conversation shifted. "You didn't have breast cancer when you were pregnant with me, right?" Whitney asked. I told her she was correct and she seemed relieved. Whitney then told me, well, actually, she didn't tell me as much as she announced that she was not going to get breast cancer. Just as I was about to chime in with something like, "I certainly hope not!" she explained her thinking. "Because you got it after you had me that means that you didn't give it to me and so I can't get it."

Clearly, my burgeoning biologist had learned enough science to have a basic understanding of genetics, even if it wasn't an accurate one. I knew I should set her straight, but I didn't want to worry her. I also didn't think that the dressing room was where I wanted to be having this conversation. But hadn't I instigated all this with the "don't be shy about your body" talk in the first place? So I felt I had no choice but to correct Whitney's mistaken notion, in very broad terms, of course, as I was acutely aware that I was also giving an unasked-for genetics lesson to the moms and daughters in stalls near ours -- who simply thought they were entering the dressing room to try on clothes!

After my master-class in Bio 101, I told Whitney that it was my sincere hope -- and belief -- that by the time she was old enough to worry about such things, breast cancer would be a thing of the past. That smart doctors and researchers would come up with a vaccine to prevent it from happening in the first place. "But what if they don't?" she wanted to know.

Oh God, Whitney. What if they don't? But she was only 11. She had time. So much time before she needed to worry about this.

This year, my daughter went for her first mammogram. The medical community recommends that young women like Whitney, "with a history," begin their breast cancer screening about 10 years before their mother was first diagnosed. When Whitney called to tell me that all went well, I could hear the cheerfulness in her voice. I forced myself to mimic her tone and made some excuse about being on the way out the door and rushed her off the phone. And then I burst into uncontrollable sobs. What was wrong with me? My daughter just called to tell me she was fine. I should feel relieved, grateful, ecstatic.

I couldn't help thinking about all those hopes and dreams I had for Whitney -- all the things I wanted to give her. My heart -- the one that sits underneath those fake breasts that will never look like my originals, no matter what the reconstructive surgeon said -- quite literally ached as I thought about the legacy I've given my daughter, who is no longer a little girl, but old enough to get mammograms (!) and old enough to have to worry about the elephant in the room: What she may be sharing with her mother some day.

Months have passed since Whitney's first mammogram and I've had time to revise my thinking a bit. Maybe I'm just trying to be optimistic, but maybe the breast cancer worry I've given my daughter is a veiled blessing. Early detection still remains the very best way to save lives. So because I have already walked the walk, Whitney is being carefully screened and watched in the hope that she never has to follow in my footsteps. But if she does, it's likely they'll catch it early and she, like me, will survive. And that's not such a terrible thing at all. 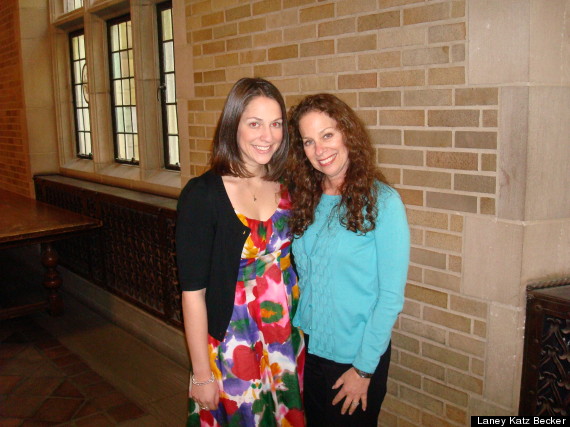 More:
Breast CancerEarly DetectionMomsbreast cancer awarenessParents
Newsletter Sign Up
Raise the kind of person you'd like to know
Subscribe to our parenting newsletter.
Successfully Subscribed!
Realness delivered to your inbox