Somali Pirates were condemned when they hijacked tankers, took sailors hostage and demanded million-dollar ransoms. But their demands were a drop in the bucket compared to the ransoms demanded by Wall Street.

And the Somalis were kinder to their hostages than Wall Street is to millions of unemployed Americans. For while the Somalian pirates returned hostages unharmed, bankers, fraudsters and failed insurers continue to harm the US administration and hold millions of Americans hostage. The latter are being stripped effectively, of pensions, savings, livelihoods and jobs.

The Pentagon ordered the US Navy to apprehend Somalian pirates. However there has been no such 'Counter Piracy Execute Order' from the White House or US Treasury and aimed at Wall St. buccaneers. On the contrary. The US Treasury, like the British government, is capitulating to the pirates of the finance sector with a haste and a timidity that is unseemly, and if I may say so, unmanly.

Britain's government announced yesterday that while it was obliged to take a 65% stake in a 'broke' bank - Lloyds - it was refraining from exercising its full rights. The government would not, for example, use its stake in the bank to give taxpayers full control. Nor would they call for the resignation of CEOs and board members responsible for breaking the bank. Lord Mandelson the Business Minister said this was neither "necessary or desirable".

The US Treasury has set the pattern. While filling the vaults of Wall Street banks with taxpayer-backed funds, Secretary Geithner has refrained from asking for letters of resignation from the board members and CEOs that broke the banks. These banks have used their control over the nation's deposits and savings and over interest rates to hold the whole economy to ransom.

The US administration, like the British government, is pumping taxpayer-backed 'liquidity' into these banks without giving taxpayers full control over the banks.

The liquidity has gone through the front door. An indecent proportion has been funnelled straight out the back door to pay bonuses to failed executives. The rest of the loot has been grabbed and hoarded by the banks and is not being lent out to companies and households at affordable rates.

In other words, the pirates have been paid a handsome ransom and left in charge of the hijacked ship that is the nation's finances.

All this daylight robbery and confusion takes place because policy-makers - at the US Treasury, the Federal Reserve and the British government - do not understand what is going on.

Let us spell it out for them. Banks are going bust because their customers cannot repay debts, or afford to borrow. Customers cannot repay debts because a) these debts exceed their income and/or assets and b) because the interest rates or borrowing costs on these debts are too high, and unpayable. If you don't believe me, ask Warren Buffett. He tells shareholders that "highly-rated companies, such as Berkshire, are experiencing borrowing costs that, in relation to Treasury rates, are at record levels.

Though Berkshire's credit is pristine - one of only seven AAA corporations in the country - (its) cost of borrowing is now far higher than competitors with shaky balance sheets but government backing."

Millions of individuals and many thousands of companies are now unable to borrow. Burdened with huge debts by de-regulated lenders and financiers, many are being bankrupted by record high borrowing costs on their debts.

This is the real crisis in the economy. And the Federal Reserve declines to address this crisis of high real rates of interest.

Because they are facing insolvency, companies are firing workers. This is pushing up unemployment to levels comparable to those at the height of the Great Depression. Unemployed workers can't pay debts. It's simple.

Our graph below gives the real unemployment figures. Last week the Labor Bureau suggested that only 5 million people have lost their jobs in the last twelve months, and that only 12.5 million people are unemployed. We think that is optimistic.

The Bureau does not include in the official release, 'discouraged' employees or those working part-time because they simply can't get full time jobs. Dig deeper, and the percentage unemployed today is almost double that announced on Friday: 15%. We predict if policies are inadequate and interest rates stay high, that it will be as high as 20% by the end of this year. That will bring unemployment - under President Obama's watch - close to the level it hit, 25%, at the height of the Great Depression in 1933. 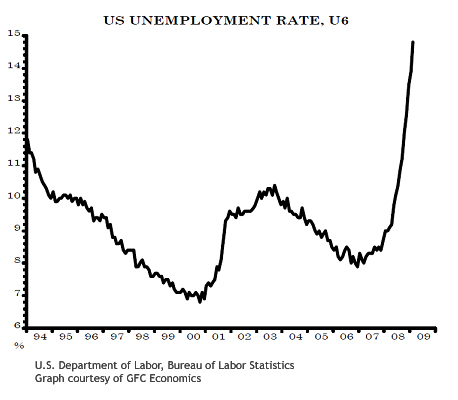 These millions of unemployed are American hostages tied up in a global economic failure not of their making.

They are desperate for the Federal Reserve to act as decisively as the Pentagon, and take on the banking pirates.

This cannot be done by pumping more taxpayer-backed money into the banks. Why? Because the crisis has moved on. It's no longer a crisis of liquidity, but of solvency. Banks cannot be made solvent by taxpayers. They can only be made solvent if and when companies and individuals can afford to borrow, and to repay debts.

By throwing money at the banks, and by refusing to take full charge of how they are run; by refusing to lower borrowing costs, US Treasury officials and the Fed Reserve are dodging the big issue: corporate and household insolvency.

Cutting borrowing costs would start to address the solvency issue. Putting a floor under insolvent companies and insolvent homeowners - would save the banks. At the same time it would release the hostages that are the unemployed, the elderly, the savers and the entrepreneurs.

The Federal Reserve can begin to lower borrowing costs by measures known as Quantitative Easing (QE). These were adopted by the Bank of Japan in March, 2001, and by the Bank of England last week. QE does not mean 'printing money' - this is a widespread misunderstanding. (For more on QE, click here.) QE will help to lower interest rates and therefore borrowing costs. Governor Ben Bernanke is still ignoring the experience of Japan and the way in which QE was used to lower rates and loosen the grip of insolvency on the economy.

He must adopt QE measures urgently. The Obama presidency has only just been launched on a wave of excitement and anticipation. If it is not to end with a hostage crisis of mass unemployment, rising crime, hungry children and riots outside banks, then the Federal Reserve and the US Treasury must take control.