They started warning of a storm on Sunday; by Tuesday excitement was crackling, kids and parents alike were talking about backwards PJs and upside-down spoons to help the storm along. It look remarkably flat and unremarkable to me. I kept the girls' excitement in check with mild clucking and, "I don't know, girls, it doesn't look very snowy." They begrudgingly did their homework, but not before making me promise that they could go skiing with Sean if school was, in fact, cancelled.

They squirmed and giggled. Briar said, "Hey mom, since it's almost, not quite, but-really-could-be-a-snow-day tomorrow can we do a sleepover tonight?"

"Oh yes, mom. It is almost like a not-school-night and we promise we'll sleep," Fin thrust her hands at me, fingers laced together in a campy fist of prayer.

I tilted my head to the side and Ave said, "You know mom, when we're all together everyone sleeps better, even you, right?" I caved.

They gave it a go, but by 10 they were each in their own beds. I spent the night peering through the window on the hour; despite having a full load at work, there is an infectiousness to wishing on a snow day. It didn't come as early or as forcefully as the forecasts had called for, but by 5 a.m. school had been cancelled. The girls scampered in for the iPad and gushed about the skiing they'd do. I smiled; there is a gratitude that comes, no matter how inconvenient the circumstances, when the universe breaks from its routine and lets us taste the ghost of being 7.

Sean's day did not go like the storm. Instead it came in with gale force winds and precipitation that made leaving impossible. A text came through at about 3:

Tell the girls I'm sorry. I really could use some mountain time, but it's just not going to happen. I'm really, really upset.

My heart sank. They'd all been so excited, Sean included. I tried to manage the landslide of emotions -- frustration that I couldn't take the pressure off Sean, grateful that he had the work ethic to ignore the foot of fresh powder, confusion about being a parent and a business owner and how they all too often seem to be completely at odds, dread at telling the girls that despite their wonderful behavior there would be no skiing.

"Hey mom. Is it time? Will Dad be home soon?" Briar asked, her hair dipping past her shoulders and her face surprisingly angular. Is she really just 9, she looks 12.

"We cleaned our rooms and brought the laundry down," Finley declared, the hem of her jeans hovered over her feet. Not a week ago they pooled at the floor.

"Girls, I'm sorry. Dad can't come home. He has to stay and finish his projects." They gasped and their shoulders dropped. They swallowed any, "but you saids" as their eyes pooled with tears.

"Why don't you get your snow gear on and I'll rebuild the sledding hill."

As they thundered off to get their clothes I thought about what was next. My back hissed at me in warning. I reminded myself of what I can and can't do, then I thought about Sean and decided that I could do a tiny bit more. I would shovel the heavy wall of snow the plows had thrown that blocked our driveway. I'd shovel the walk. This way when he got home he'd have fewer things to tend to in the dark. I smiled as the girls bellowed at one another as they tried to find their gloves and hats.

Ninety minutes later the big girls were swinging from trees and Finley was following me around with a lime green beach shovel; each path I'd clear with the snow shovel, she'd trace with her own."I'm going to be just like you when I grow up mama. Yep, I'm going to love my children and never say mean things, 'cept when they're bad, but it won't be mean, just 'stricture.' And I'll be a worker, cooker, lover mom." A sob hiccuped in my throat and then my phone thrummed in my pocket.

I was going to come home. Is it too late to take them skiing?

I texted back that it wasn't and then shouted to the girls, "Dad's coming home, go have a snack and get your boots on." They screamed and darted toward the house. Finley looked at me and I said, "What do you say to a sledding date with mom?" She beamed, "I say great!"

We walked up to the garage to help her sisters get dressed; they were breathless.

"Do you want to borrow my red gloves?"

"Did you pack an energy bar?"

I wondered about sledding. This was going to be Fin's treat, but was it fair? If I wasn't exactly excited, did it mean that I wasn't really having a date with her? Does having to cajole myself into pretending to like being out in the snow mean that I'm not really in the present? Mostly I wondered why on earth do we have to grade every action on its level of genuineness or presence in the moment.

"Mom, can we go on the big one together first?" She was looking up at me, goggles cockeyed and her nose red as could be.

When Sean left with the big girls, Finley and I chased the headlights with our sled. The plastic toboggan shot down the driveway cutting through the fresh snow. Sean cheered out the window and Finley raised her fist in triumph.

"Yes!" She popped up from the sled, swiped her hand across her nose, sniffed dramatically as she licked her lips and blurted, "Wet's do it agin, mama."

We spent an hour hurtling down the hill, the trails we left making an octopus shape on the hill in our front yard. I'm not sure when I stopped analyzing the activity and started riding behind her like a 7-year-old, but I did. When we finally called it a night, we were both deliriously happy. We kicked the snow off of our boots until the basement floor looked like meringue. We laughed at each other's hair and declared it the best sledding date ever. 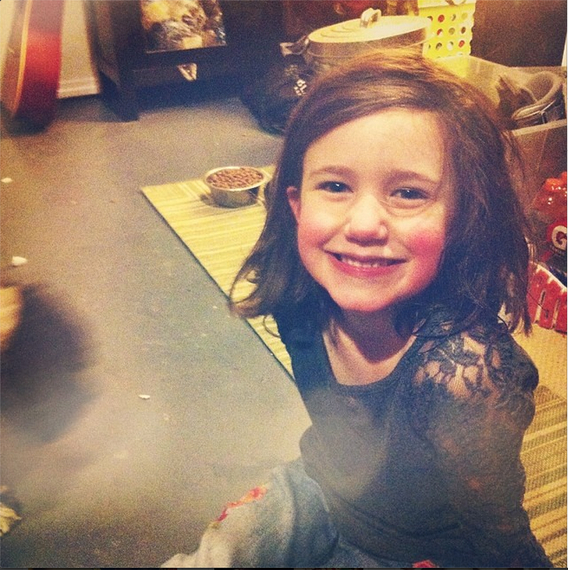