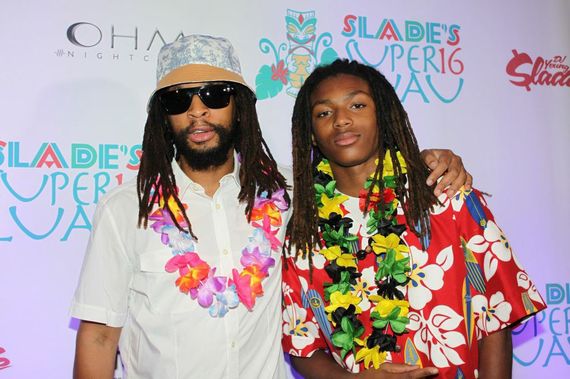 Rapper, DJ, and record producer Lil Jon is proof that having edge and being a good dad are not mutually exclusive, however he does compartmentalize. "I make party records -- and partying and parenting are not even close. When I go in the studio I'm in a different place than when I'm at home with my family... When I'm out, I'm Lil Jon, but when I'm at home, I'm Jonathan Smith," he emphasizes.

Currently, Lil Jon, along with DJ Snake, is defining the moment with the party anthem, "Turn Down For What," which is at over 2 million sold and is No. 5 on the Billboard Hot 100.

The song was written as a call to keep partying, yet Lil Jon acknowledges that it has taken on different meanings -- he gets tweets all the time telling him how the song's energy is motivating, especially for working out. "It pushes you to go a little harder at whatever it is," he says.

The Grammy award-winning artist is also well-known for his album Crunk Rock and for being involved in a string of hits including Usher's, "Yeah!"

Talking with Lil Jon, I got a sense for his good kind of chill -- not an uncaring coolness, but a positive, relaxed energy. I can see how his demeanor plays into the close relationship he has with his 16-year-old, only child, Nathan. During our conversation, Lil Jon opened up about fatherhood, his own childhood, and marriage, as well as, drugs and alcohol.

What He Was Like as a Kid
Lil Jon grew up in a middle class family in Southwest Atlanta and, by his own account, didn't get in a lot of trouble with the law and wasn't a bad kid. His parents were strict when they needed to be, but otherwise "loosened the leash," letting him roam some.

His parents gave him the chance to test his DJ skills out early: "I lived in the basement of my house and it was basically like a mini apartment. I had a turntable set up so at any time we could have a party." His parents would rather have him under their watch at home than have him, "be in the street somewhere wilding out."

One of the greatest joys for Lil Jon is seeing everything come full circle with his son who's been DJ'ing since he was 11-years-old under the name Young Slade. "When my son graduated from DJ academy I teared-up to see him following in my footsteps." 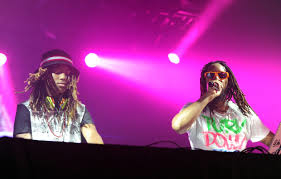 Partying, Drugs and Discipline
Lil Jon is no different from other parents concerned about their kids partying too much or falling into the wrong crowd, but he says, "You have to expect that kids are going to experiment especially in 2014, there's a lot going on... you have to talk to them about right and wrong and make them understand the consequences if they do certain things."

He particularly stresses staying away from hard drugs like Ecstasy or Molly and cocaine, but also tells his son that he's too young for weed or alcohol and to stay away from it. I ask Lil Jon if he's ever touched any of the hard stuff? "The only thing I've ever done is smoke weed," he answers.

Overall, Lil Jon seems confident in the ability of his son to make the right choices. "He's a really, really good kid" who is "well-mannered and well-behaved," he says.

Lil Jon uses discipline when needed, but also is big on giving kids enough freedom; otherwise he feels that too many restrictions will force kids to rebel. For Lil Jon, communication with his son is key: "I listen to my son... he can talk to me about anything."

I wondered if he thinks his brand of party music affects his son negatively. His response: A definitive, "No. Because we stress right and wrong and he knows what kids do and what adults do."

On Dedication and Turning Down A Saturday Night Live Gig
Lil Jon tries finding a way to balance being on the road and being a dad.

"I made a pact that I would never miss a birthday -- I've been there for every one of his birthdays. One time when "Yeah!" was out, Usher got invited to do Saturday Night Live and he asked me... to come and I had to decline because it was my son's birthday... I chose my son over the opportunity," he says with pride and without regret.

The Secret to His Marriage is...
Lil Jon has been married to his wife Nicole since 2004. He made it clear that he's the cook in the family (a specialty is BBQ jerk steak) and she's the one who is more likely to come down hard on Nathan if he gets out of line, "His mother is crazier than me so he definitely don't wanna get his mom pissed off," he laughs.

In terms of marriage he says, "You learn to adapt to people as time goes by... because nobody's damn perfect. And you also change -- you see stuff that you do that's not perfect and you change yourself a little bit to fit in with your spouse."

Work Ethic
In the industry and among his fans, Lil Jon is known for his work ethic (something he demonstrated on two seasons of Celebrity Apprentice) -- a value he wants to pass on to his son, along with respect for others and education.

In terms of work, Lil Jon recently signed a deal with Epic Records for two more singles, one of which is "Bend Ova" featuring Tyga. He also is pursuing some opportunities in TV.

The Best Advice He's Received
I asked Lil Jon about the best parenting advice he's received, but he feels advice only gets you so far: "Parenting is like riding a bike. Somebody can show you what to do, but until you get on the bike and start riding it, you're not going to figure it out."