There's one way to kill a zombie: Choose your weapon, aim for the head, bash and repeat.

Inventor Marvin Weinberger recently wrapped up a successful Kickstarter campaign, raising more than $123,000 for a foot-long multitool called the Lil' Trucker. The device takes on the shape of an apocalypse-ready hatchet that'd be the perfect weapon against an army of the undead. His company, Innovation Factory, released a horror-inspired ad in lieu of the traditional crowdfunding intro video that demonstrates the functionality of the tool.

"We thought, wouldn’t it be fun if we could demonstrate every key feature, but do it in the guise of a zombie video, with the heroine escaping from the bad brain-munchers and showing off all the features along the way," he told The Huffington Post.

Zombies aside, the Lil' Trucker is quite the multitool -- it has things ranging from a foldable saw and a can opener, to a gas shut-off cut out and a glass breaker. It's highly usable for search and rescue teams, and can cut chain-link fences, open padlocks on doors and help clear out debris.

Weinberger said he hopes the tool catches on not just with rescue workers and firefighters, but also finds a foothold in the glovebox. He pointed to recent floods around the country, and said something that can both cut your seatbelt and break a car window could be an essential survival tool.

"Whether or not you're dealing with zombies, you’re still dealing with every day challenges and we think the tool is perfect for every glove compartment," he said.

The Lil' Trucker's Kickstarter campaign is over, but if you're interested, you can sign up to be notified when the tool is available to the public, or check out the full-size Trucker's Friend. 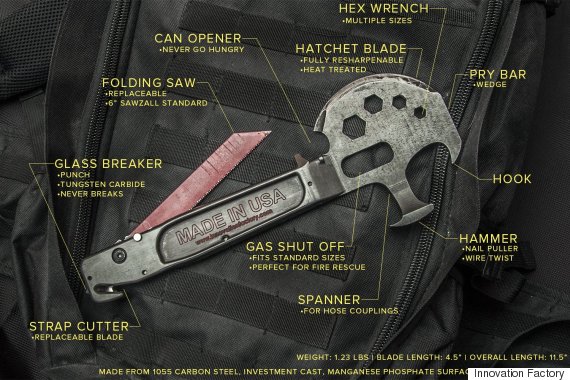 1
'Fart in a Jar'
The brainchild - or, indeed, brainfart - of video games industry veteran Roy Stanton, 'Fart in a Jar' intends to "share farts with the world", with a 'menu' of farts from 80 different nationalities "collected for your sniffing pleasure". Worried about authenticity? Fear not. "Fart in a Jar comes with a note of origin and is sealed to keep the freshness in." Phew!
2
'Russian Roulette Chocolate'
We're sure Forrest Gump would approve of these boxes of chocolate that "will have everything that you find in an ordinary box of chocolate but will also consist of some scary, foul, nasty, and downright terrible fillings." And if you want to know what those terrible fillings will be, "you will just have to contribute to my kick start and find out!" Crikey. We're genuinely scared.
3
'Mistamp - The Real World Like Button'
In which you take a real plastic 'button' with the Facebook Like thumbs-up image on it, place it on an object, press the plastic button on your phone, and it gets shared to Facebook. We think. Mistamp has its own crazy logic to it, but we're sure there's an easier way of doing something like that. Oh, yes...
4
'Terra-Bacon-Flour'
Now, don't let the picture of worms put you off. Terra Bacon Flour is "great for baking tasty treats." And how is it made? "First I have to individually take the guts out and clean the worms. The next step is smoking and drying the worms. The next step is to blend the worms with the all natural flour." YUM!!
5
'A actually helpfull and usefull social network'
"All the other social Networks are missing many important elements when it comes to human nature in socializing. Therefor this New social network will cover all of those and actualy make lifes better for millions," writes ulvestad. And, erm, what will this network be like? What will it contain? How will it function? Erm, we have no idea. It doesn't say.
6
'Traveling Toilet'
Ever wanted to have a photo of a man on the toilet on your wall? Perhaps on a toilet in a wheat field? Then this is the Kickstarter for you. "I started thinking, how funny and fun it would be to travel around the Midwest taking photo of me on the toilet," says David Benna. And who are we to deny him that fun?
7
'The Goat Project'
"I WILL CREATE, THE FIRST AND ONLY GOATGOATGOAT HUB, ON THE ACTUAL INTERNET, AND INCLUDE AT LEAST 50 IMAGES OF REAL GOATS I FIND IN THE UK," explains Goat Man. The perks if you decide to back it are considerable, and include "a personalised image of a goat (doing anything you choose), drawn by a real artist. (He's good!)" if you pledge £20 or more. We're in!