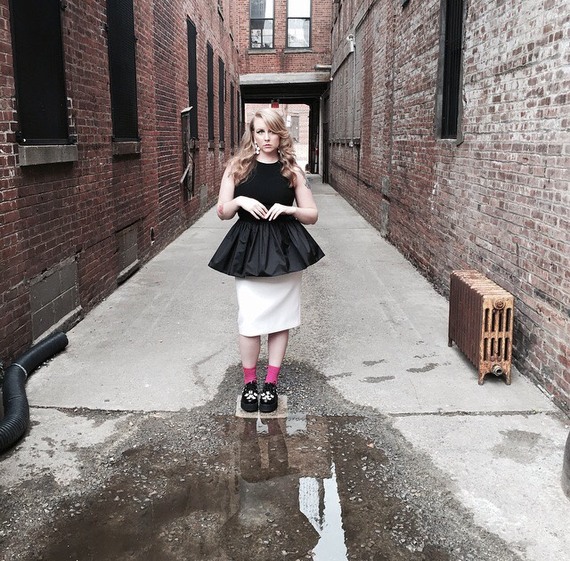 If you go onto the homepage of Tidal right now you will see a mini documentary with Lili K, a Tidal Rising artist. She is a jazz artist from Chicago who has collaborated with Chance The Rapper and Vic Mensa. Her music is best described as having elements of jazz, blues, funk, soul, hip-hop, and R&B. She recently released her debut album Ruby, is setting up a tour schedule, and is taking in all the opportunities Tidal has offeredher. I sat down with her last week to see what the last few months have been like, and what we should expect from her moving forward.

Growing up she came up on a lot of Motown, soul, and classic rock playing around the house. Her mother was a big music enthusiast so that helped her explore music before she even was looking to do so. In middle school she was introduced to jazz music, and described it as eye opening because it finally showed her vocalists that resonated more with her sound. That is the time that things with music started to get a bit more serious for her.

Lili K had a variety of music inspirations. Some of her favorites were founders of the soul and Motown sound. Rachelle Ferrell, Dee Dee Bridgewater, Aretha Franklin, and Gladys Knight are some of her favorite artists. Above all though she looks up to Ella Fitzgerald, and even believes she is the greatest vocalist of all time. She described Ella Fitzgerald as someone who could use her voice as instruments, and someone who could convey a range of emotions using her voice as well.

On April 21st, 2015 Lili K released her debut album "Ruby". She said it only took about a week to actually record. They went in for a day in May of 2014, and then for an entire week in June. From there it was just about tweaking things, laying extra percussions, horns, and string parts. She said it has felt like the album been done forever before it actually ended up coming out.

Overall she was really happy with how the album turned out. She was going for a throwback soul experience. Because of that they left talking in the background, piano creeks, and things like hearing the tape reel switch over like in older recordings. The imperfections were something she felt were so beautiful. While the audio quality these days is amazing, there is something to be said for little things like that which got lost over the years.

Also, the reception to the album has been great so far. Most people have been used to hearing her music through hip hop collaborations, but she has found that many people took out the extra time and effort to listen to her solo work as well. Lili K also felt the exposure provided by Tidal definitely helped more people find her music, especially in terms of social media sharing.

When Lili K and her team were figuring out the best way to get "Ruby" to the greatest audience possible they had the idea reach out to Tidal; especially because she is an independent artist in a genre that is not heavily supported by blogs or Internet culture. So they figured it would be cool to see how reaching out would be. She had no idea if she actually would get a response, but she did get one. And it was so overwhelmingly positive that they told her they wanted to do an exclusive premier for her album. They gave her a bunch of interesting opportunities for exposure as well. Not only for subscribers, but even just on the home page for anyone to see.

Overall, Lili K has felt that Tidal has been extremely supportive. They keep finding more opportunities for her, and because of the social media blasts they are doing for her through their own pages she is seeing a lot of traction on her music. Specifically she said,

"Getting posted on big blogs is cool, but there's so much content that it's not really that permanent of a thing. But with Tidal each time I did something like an interview or pre-stream, it was heavily placed on the front page. And that's not normal for an up and coming artist. Especially when you're releasing at the same time as a mainstream artist so it feels more like an even playing field."

She said she has been getting actual fans from Tidal who have commented on the album and her music as a whole. Because she's had such a great experience with Tidal I asked her why she thought that Tidal is represented as a company who doesn't care about up and coming or indie artists, and she said;

"A huge part is how quick Internet culture is to jump on board to bash something. It's such a trend. Everyone just automatically loves or hates something depending on what information is out. Instead of doing research people just develop these harsh opinions. I think. Many of just misinformed. Also, if you want to launch a new service it's great to have people who are big influencers behind it, and if it's a platform supporting emerging artists then it makes even more sense to have people like Jay Z, Beyonce, or Kanye West. And that's something that's been way overlooked and judged way too quickly."

Artists like Lili K are the beginning of what Tidal has had planned all along. Taking artists who have amazing music, and helping bring them to the masses. The ideal vision seems to be creating something akin to a full-fledged artist factory. They are looking to the future by engaging with artists from the entering stage of their careers until they are established artists. If the talent of Lili K is any indication of the types of artists we'll be hearing more about then every music fan should be excited. As fans, all we can and should do is sit back and enjoy!