This is definitely a big movie year for our favorite fairy tale princess, Snow White: Mirror Mirror, a lighthearted take on the Grimm tale, hits theatres in March, and the serious, darker rendition, Snow White and The Huntsmen, comes out in June. And one of these big screen Snow Whites is gracing the cover of Seventeen's March 2012 issue. Check out a sneak peek of Mirror Mirror star Lilly Collins looking vibrant in a neon green Nanette Lepore dress and colorful statement jewelry in the slideshow below.

In her Seventeen interview, the bold-browed daughter of '80s British pop singer Phil Collins opened up about embracing the qualities that make her unique. “It used to bother me – having bigger, fuller brows," she said. "I even plucked them once so I’d fit in, but I hated them and couldn’t wait for them to grow back. Now I embrace them. I’ve realized the quirky things that make you different are what make you beautiful.”jenn

Lily also talked about the celebrity crushes of her childhood. “It’s weird to have celebrity crushes now because I could actually meet them or work with them! When I was younger, it was definitely Leonardo DiCaprio in Titanic. I had pictures of him and I had ‘NSYNC posted. I had the biggest crush on Justin Timberlake!”

Speaking of celebrity crushes, Lily's rumored former flame and Abduction co-star Taylor Lautner covered Seventeen in September, confessing in an interview that he felt both an on-screen and off-screen connection with her. He said: "You can feel some sort of chemistry or a connection when you are reading a script with someone for the first time. And that was totally the case with Lily."

March the the second-biggest month of the year for magazines -- after September, when the fall fashion issues come out -- and this March is going to be a particularly exciting one. Some of our other favorite young stars will also be making appearances on newsstands next month. Selena Gomez is the controversial cover girl of Cosmopolitan, Ashley Greene covers Lucky, Daniel Radcliffe looks dapper on the cover of Esquire UK, Kendall and Kylie Jenner pose for Teen Vogue, and Jennifer Lawrence and Shailene Woodley make Vanity Fair's Hollywood Issue cover. Lily Collins is also featured on the inside cover of Vanity Fair.

In honor of Lily's Seventeen cover, we've compiled a slideshow of some of the breakout star's best red carpet looks.

Are you excited to see Lily in Mirror Mirror? Tell us in the comments below or tweet @HuffPostTeen!

CORRECTION: In an earlier version of this article, Jennifer Lawrence's name was misspelled. We regret the error. 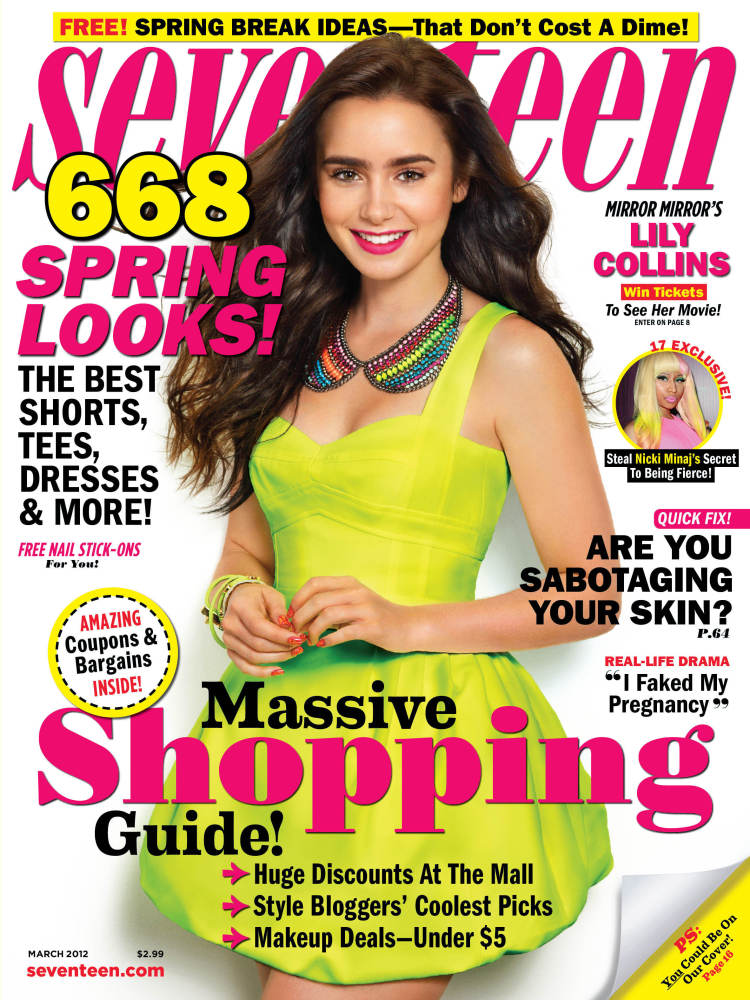