Lilly Mossiano is a transgender mother living in Burlington, North Carolina, whose series of children's books aims to help kids with transgender parents understand the process of transitioning and wrap their heads around the concept of gender identity.

Titled The My New Series, the franchise currently includes two books, My New Mommy and My New Daddy. She is currently in the process of penning a third, which will serve as a resource for children who have a sibling that identifies as transgender.

The Huffington Post chatted with Mossiano last week and discussed her inspiration behind The My New Series, as well as her experiences living and working as a transgender parent in a small southern town.

The Huffington Post: Why did you decide to write The My New Series and what purpose do you hope the books serve?
Lilly Mossiano: Well, I am a parent and being a transgender parent I started looking for resources that would help a child understand a parent that is going through transition. I found a serious lack of resources -- there wasn’t really much information for little children. Having a four-year-old child at the time, I had to come up with a way to try to explain it to my daughter. So, I came up with the first book, My New Mommy, as a way to explain it to her. She wrapped her head around it very easily with the book and fell in love with it so I decided that, seeing as how there was a lack of resources, what I wanted to do was get a resource out there. So I turned and got My New Mommy published, which gave birth to people asking me questions like, “Are you going to do any other books continuing on with other transgender aspects?” and parenting and what happens with two parents [when one transitions] -– because I wrote it as a single parent for my daughter.

From there, My New Daddy came about because my best friend is a trans man and I wanted to have a resource for his son. That’s how the series started -- I’ve got plans for more versions of the books. One is going to deal with a brother that’s transitioning, [one with a] sister that’s transitioning -- children -- as well as what happens if two parents are separating because of it. I want it to be a foundation in the trans community for the children because there are so many resources for the adults but not enough for our kids. And the reality is that a lot of us have children.

When you initially wrote the book and your daughter read it for the first time, how did that help move forward the conversation surrounding trans identity for the two of you?
Well, I wrote it from her perspective. I put it in a way that a four-year-old could wrap their mind around it easily, and she wrapped her head around it and looked at me and said: “So you are my daddy?” And I said, “Yes, I will always be your parent.” And her response was, “But now you’re my mommy?” And I was like, “Yes dear, I am.” She then said, “So, God made a mistake and you were born in the wrong body? I get it.” And that was how it came about. A former associate of mine also gave my book to her autistic child -- she wrote a blog post about it -- and he was able to wrap his mind around it with no problem. He looked right at it and was like “Wow, I understand now,” because he had met me but he couldn’t understand that I was born one way and I was changing to become who I was inside. And then he was really confused but after reading the book he all of the sudden was able to understand it because of the way I tailored it. 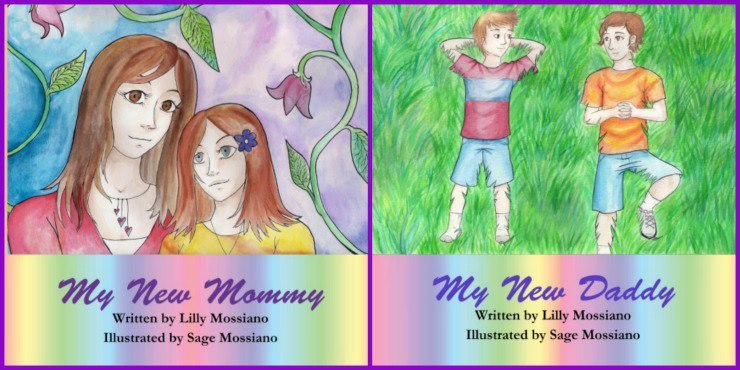 Do you think that trans people have a responsibility to children understand what it means to be transgender?
I think everybody has a responsibility to educate the next generation. If you go back through history with racism, the only way we can really exterminate racism is educating the next generation so that we can stop it. And when it comes to transphobia and homophobia, the only way that I think we as a community can stop it is if we take it upon ourselves, instead of fighting with the radicals or the extremists -- don’t fight with them. We set an example and we educate. That way the children understand as they’re growing up that there’s nothing really wrong with these people. These people are not any different than they are. They have different views and they do different things but they are still human beings. So, that’s the only way that acceptance can actually come about -- through education.

You switched publishers recently in order for the price of your book to become more affordable. What has the response been like since your book became more easily accessible?
After I changed publishers the book actually started gaining speed, more speed than before. On places like Tumblr my book went viral, people were posting it everywhere including an actor, Mischa Collins, from the “Supernatural” series. He reposted it -- put it out there. Since switching publishers more people have been able to buy the book because the original publisher wanted to charge $25 for a small children’s book. I was wrapped into a scam job of a publishing company that I later found out about. So, once I got the release from the contract I did a self-publishing by starting up my own publishing company called Spun Silver Productions. We’re trying to slowly build this up at the same time as building my book up to get it off the ground so people like me can get their books out there without running into these bad companies.

You live in Burlington, North Carolina. What is it like to be a transgender mother in the South raising a child?
Scary. I don’t have custody of my daughter because of being transgender. The state stepped in when her mother’s [current] boyfriend abused my daughter and they put my daughter in foster care. The reason why they did that [instead of giving me custody] is because they didn’t view -- and I’m still in the process of dealing with that -- they didn’t view me as a good enough parent because of my being transgender. They thought it would be too confusing. Being a transgender parent in the South, you face adversity but it’s not like any adversity anyone faces up North. There’s still going to be the bigots, there’s still going to be the haters and you just have to set an example. I, for one, am not religious but I will quote a line from the Bible as the best thing, in my opinion, for it and that is to “turn the other cheek.” I don’t believe that watching violence and responding with violence will actually change anything. But I am fearful when I go out sometimes because I have been attacked. I went out to eat at a Red Robin and I had a local reach over, call me a freak and grab my press-on nails that I had because that was the only thing he could get his hands on and he yanked those off. Then while at the restaurant, I felt again another form of fear from the fact that they decided to parade all their servers around me and withheld my check so that they could, as they put it, “go look at the freak sitting in the booth.” It’s an establishment that I don’t go to anymore down here but it was a very frightening thing. I was about in tears and when I got out I was crying because at that point all I wanted to do was pay my check and leave. I was on a date at that time and the person I was on a date with wanted to get angry and I was trying to stop a scene from happening because I just wanted to pay the check and go.

But on the other hand there are good things that have come from down here. There are good people who do seek to change the status quo and I’ve met a good support group.

You mentioned that the court claimed you couldn’t have custody of your daughter because your transgender identity would be confusing to her. Do you intend this series to in some way impact the custody battle itself?
I’m not going to use the series to impact the custody battle directly. But I do want it to be there in case another parent is facing down what I’m facing -- this would be a preemptive strike for that parent to be able to go, “Well, I have a resource here that would actually teach my children so that they can understand what’s going on and it’s not confusing.” At this point all I’m really trying to do is set the stage for if anyone else ends up following -- which I’m sure will happen -- ends up following the road I unfortunately ended up going down. I want them to have the resources handy, and that were not available for me.

Besides your frustrations as a parent regarding a lack of resources for children, are there any other influences or driving factors behind your decision to make the series?
My family. My mother, my father, my brother and my best friend all told me as I was explaining it to them, they all gave me support and have the faith in me to continue onward. They think what I’m doing is a tremendously wonderful thing and their desire to see me succeed and their desire to see me help educate others -- when things get bleak for me it is a strength I can draw upon that helps me continue onward. If it weren’t for their help I probably wouldn’t have gotten any of [the books] published.

Mossiano is currently working on the series' third installment, focusing on children who have a brother that identifies as transgender. She expects the book to be published by February 2014.

For more information on Lilly Mossiano and The My New Series, visit the author's website or Facebook page. The series itself is available for purchase in print or e-book format through Amazon, Barnes & Noble, and Smashwords.

Lilly Mossiano, 'My New Series' Author, Talks About Books And Being Southern Transgender Parent
15 Things To Know About Being Transgender By Nicholas M. Teich