OurPaths is a place to celebrate life. Join us. 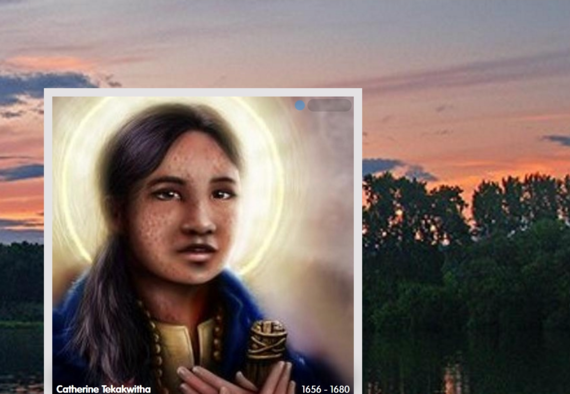 Catherine Tekakwitha, known as the "Lily of the Mohawks" for her beauty and healing powers, was the first Native American woman to be canonized as a saint by the Roman Catholic Church.

Believers say her spirit continues to heal the afflicted centuries after her death, and her sainthood is celebrated each year on July 6.

An Algonquin-Mohawk, she survived a smallpox epidemic that left her an orphan with scars on her face and body and limited vision and claimed the lives of her parents and her brother. She was adopted by her father's sister and her husband, a chief of the Turtle Clan. The survivors of her village built a new encampment at the top of a hill, west of the Mohawk River along its southern bank.

The name she was given, Tekakwitha, translates to "she who bumps into things." 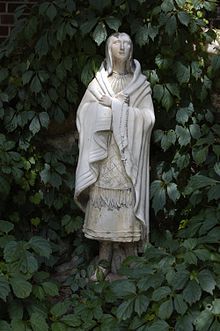 Sculpture of Catherine Tekakwitha outside a church

They called their new village Caughnawaga, or "at the wild water" in the Mohawk language. She lived in a longhouse and became skilled at traditional women's arts, which included making clothing and belts from animal skins; weaving mats, baskets and boxes from reeds and grasses; and preparing food from game, crops and gathered produce.

In the summer of 1669, several hundred Mohican warriors launched a dawn attack on Caughnawaga. Mohawk villagers fought off the invaders, who kept Caughnawaga under siege for three days.

Tekakwitha, now around 13 years old, joined other girls to help priest Jean Pierron tend to the wounded, bury the dead and carry food and water to the defending warriors on the palisades.

She was pressured by her adoptive parents to consider marriage at around 17 but refused, taking a vow of virginity which she kept until her death. At about the same time, she began studying the Catechism under the watchful eyes of a Jesuit priest. 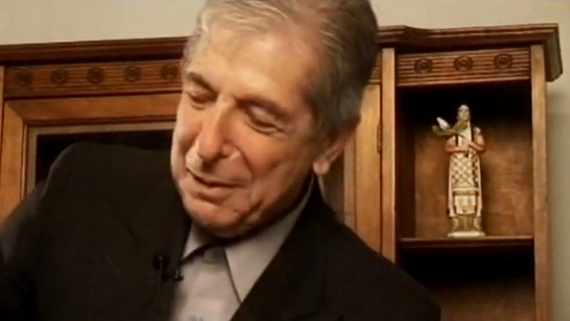 Saint Catherine has inspired secular artists including Canadian singer / songwriter Leonard Cohen, who invoked her image in his 1966 novel "Beautiful Losers" as well as in songs. Cohen keeps a statue of her in his Montreal study.


Shunned by her tribe for her conversion to Catholicism and suspicions that she was a sorceress, she was said to possess healing powers. She became a nun at the age of 20, dedicating herself to the harshest of regimens.

According to records kept by Jesuits, she subjected herself to prolonged fasting, cutting, sleeping on a bed of thorns and burning herself with hot coals. Piercing the body to draw blood was a traditional practice of the Mohawk and other Iroquois nations; priests soon introduced her to more traditional means of self-mortification, including whips, hair shirts and iron girdles.

Through the years, a number of clergy reported their belief in her saint-like qualities and her ability to heal the sick. The Jesuit priest Claude Chauchetière, a mentor who became her first biographer, reported being impressed over the years by her "charity, industry, purity, and fortitude."

Another early biographer was more impressed with her virginity. 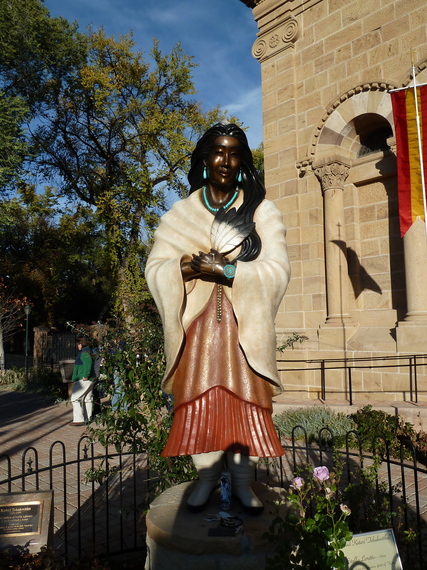 Catherine Tekakwitha died during Holy Week, April 17, 1680, at the age of 23 or 24, held in the arms of in the arms of her closest friend and fellow nun Marie-Therèse. Chauchetière reported that her last words were. "Jesus, I love you."

Tradition holds that all her smallpox scars vanished without a trace at the moment of her death.

Chauchetière's biography, published in 1695, was the first of a series of books on the "Lily of the Mohawks" that continues to grow. A 2005 book by Alan Greer, "Mohawk Saint: Catherine Tekakwitha and her Life With the Jesuits", ascribes these words to her:

"Take courage despite the words of those who have no faith. Be assured that you are pleasing in the sight of God and that I shall help you when I am with Him."

Several of the miracles attributed to Saint Catherine by the Vatican occurred after her death. Among them: a young boy afflicted with smallpox in the 18th Century was on the verge of death until he was cured by a piece of wood from her grave, and a priest regained his hearing by using items belonging to her.

In 2006, a boy afflicted with a flesh-eating infection which had eaten a hole in his lip received last rites from the church. A nun reportedly brought him a shard of a bone from Saint Catherine and he was miraculously healed.

She was beatified by Pope Benedict XVI at Saint Peter's Basilica on October 21, 2012. In addition to her miracles, the church cited her work teaching children to pray. Her ashes lie beneath a church built on her grave site at Caughnawaga near Quebec City.

Clay Haswell is host of the OurPaths community, where people celebrate extraordinary lives.