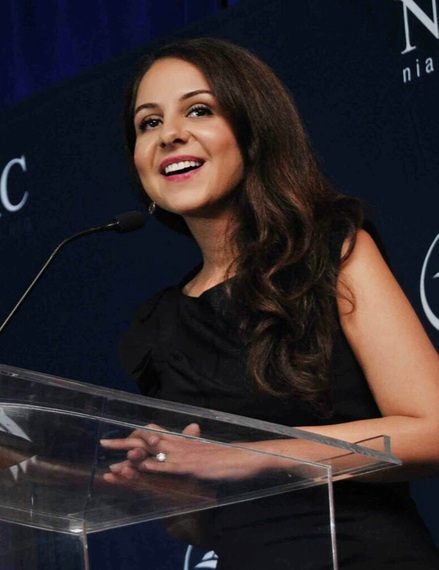 With the goal of harnessing the untapped potential of Iranian-Americans, and to build the capacity of the Iranian diaspora in effecting positive change in the U.S. and around the world, the West Asia Council has launched a series of interviews that explore the personal and professional backgrounds of prominent Iranian-Americans who have made seminal contributions to their fields of endeavour. We examine lives and journeys that have led to significant achievements in the worlds of science, technology, finance, medicine, law, the arts and numerous other endeavors. Our featured interviewee today is Lily Sarafan .

Lily Sarafan is co-founder and CEO of Home Care Assistance, the largest consumer health company in aging services, with more than six thousand employees across 100 global markets; Sarafan is an angel investor, advisor, and mentor for startups and accelerators including 500 Startups and StartX, and one of Silicon Valley's top 40 under 40 honorees. She serves on the boards of several high-impact organizations including the Stanford Alumni Association, the BerkeleyHaas Center for Entrepreneurship and Development, the National Iranian American Council.

I was born in Tehran and grew up in the San Francisco Bay Area. I benefited from a deep and diverse set of childhood experiences -- international school in Tehran, Catholic school in Los Angeles, and the majority of my childhood in exceptional public schools in San Jose. I was most influenced by a parental triumvirate made up of my intellectual mother who immigrated to the United States with me as a toddler in the 1980s, progressive stepdad who immigrated from Iran in the 1960s and enterprising father, who continues to live in Isfahan. I spent my middle school summers in London and school vacations accompanying my parents on General Electric business trips around the world. I was also actively involved in student government and debate. Throughout high school and college, I saw the entrepreneurial spirit of Silicon Valley crystalize around me; I also recognized that the area's emblematic tratis were the same ones that my parents instilled in me: self-confidence, openness to strategic risk, blue sky thinking, the notion that nothing is unattainable. My family's unwavering faith in me and the example they set have been the foundation for everything I have achieved.

You graduated with a BS in Science, Technology and Society and MS in Management Science and Engineering in four years from Stanford University. Share the role that the university has played in your life.

I cannot fully articulate the impact that Stanford has had on my life.At 16, I committed to attending Stanford and became a Cardinal disciple. I memorized the course bulletin, volunteered on campus the summer before freshman year, and successfully petitioned the Registrar's office to take more than the recommended number of units. I explored numerous academic subjects -- computer science, philosophy, economics, chemistry, anthropology -- and quickly learned that magic happens at the intersection of disciplines. Both of my degrees reflect Stanford's interdisciplinary strength and transformational liberal arts offering. The Stanford journey also equipped me with the tools and resources to become a critical and multidimensional thinker, which enabled me to advance discourse and address challenges of all scopes.

At Stanford, through leadership roles including Class President and Eben Tisdale Fellow for High Tech Public Policy, I learned the value of inclusive and strategic decision-making and saw the vast possibilities at the nexus of the public and private sectors. Beyond every internship and capstone project, Stanford presented me with lifelong friends and access to an invaluable network of change agents. My love affair with Stanford continues to this day, whether it manifests in my office in Palo Alto that overlooks the campus or my regular engagements on the future of the university through the Stanford Alumni Association Board of Directors and the Task Force on Undergraduate Education.

Under your leadership, your company, Home Care Assistance, became the fastest growing company in its segment and recently experienced an industry-record exit. To what do you attribute your success?

Over the past decade, Home Care Assistance has been through many iterations from bootstrapped startup to venture-backed growth company to industry leader. In the early days, I managed everything from negotiating retail contracts to building our corporate Intranet. That baseline gave me deep knowledge of every aspect of our company, even as we built an expert team and scaled to more than 100 markets. Having witnessed the dot-com bubble firsthand in college, I was determined to lead a sustainable, profitable business. That commitment to longevity (no pun intended) was key, as it shifted the agenda from growth alone to execution, customer satisfaction and talent acquisition.

Summit's recent investment in HCA is a testament to that work and proof-positive that the aging sector is ripe for serious attention and innovation. I also attribute a great deal of our success to the diversity of personalities and backgrounds on our team. After all, if two people are exactly the same, one of them is unnecessary. I am a big picture thinker, so I am grateful for the valuable contributions and potential of each team member, especially those who respond to my vision with detailed plans!

Is healthcare where you envisioned yourself ten years ago? What decisions led you down this road and what values have most influenced your career?

As a college student, I dabbled with the idea of becoming Chief Technology Advisor to the President. When I met the CTA for President Obama this year, it was clear that he is as well-suited for his role as I am for mine. Coming out of Stanford, I was seeking a platform for business and social impact. Healthcare and the under-innovated aging sector presented an unparalleled opportunity to professionalize a fragmented, outdated space that affects nearly everyone. We became the first company in our space to harness the power of the Internet as well as the first to offer differentiated solutions to our customers. In hindsight, we re-imagined aging altogether and made original contributions to what is now called on-demand healthcare. As the years passed, it became clear that my experiential learning and personal growth leading our company would take the place of the JD/MBA I had assumed I would one day pursue. I've also been fortunate to integrate many passions into my professional career, whether I'm participating in the White House Conference on Aging to discuss public policy, building our internal innovation team, or creating plans to bring our solutions, and in turn job creation, to developed and emerging markets.

You are involved in numerous ventures as a CEO, investor and philanthropist. How do you manage your time to achieve the most impact?

This is an open question with an evolving answer. At this time, I introduceefficiencies into my life in a number of ways. They include spending time on only those efforts that I can uniquely create value around while empowering others to take on the rest. I draw energy from all of my activities and integrate them into a unified whole, and since I do not operate in a vacuum, I leverage my varied experiences for the benefit of the one at hand. For example, scaling a for-profit enterprise has ready applications to scaling a non-profit organization. Similarly, fundraising for a candidate has shared objectives with fundraising for a start-up. Friends, colleagues, and all those across my numerous networks are aware of the causes I promote, which means I do not waste energy putting on distinct hats. Some of my most memorable moments as a leader have felt like serendipity at the time, but looking back were the culmination of countless interwoven strands of my life coming together. Breaking silos and finding the connection -- so far, that is the only way I know to generate more time and impact.

You are or have been actively involved at a leadership level in many of the organizations in the Iranian-American community including the National Iranian American Council, and Pars Equality Center. Why you are so passionate about the community and what do you believe the future holds?

We are an immigrant community that has punched above our weight inacademia, the arts, business and many other arenas; however, we have yet to amplify our collective voice in American civic life. Even as a child, I felt a calling to organize and strengthen our community, and did such work through various civic organizations. As an undergraduate, I conducted honors research on the role of the Internet in Iran and saw the power of bridging the dynamic Iranian diaspora with the aspiring young population of Iran who by and large wish to integrate the 18th largest economy in the world with its fellow nation-states.

In this light, the recent P5+1 nuclear deal was a victory not only for peace and diplomacy, but for the Iranian-American community as well. Our participation in the process and engagement with decision-makers was and remains absolutely crucial to the avoidance of war and ongoing progress toward lifting sanctions that disproportionately harm ordinary citizens. As an American of Iranian descent, I want to weave the considerable contributions of our community into the fabric of American life while forging ties that secure a more colorful future for the world. Even more, I want to help build the infrastructure of our community in the United States, including the hundreds of civil society organizations I hope we establish, so that future generations of Iranian-Americans have the solid foundation and role models for lasting success.