The UN climate conference in Lima, Peru (COP 20) finally came to a close early Sunday morning. Negotiators haggled around the clock well past the formal Friday deadline, but still could only come up with a weak agreement called the "Lima Call for Climate Action."

The agreement falls short of actions needed to avoid the catastrophic consequences of a warmer world. Yes, government leaders reaffirmed their decision to put individual climate pledges on the table prior to the December 2015 COP 21 meeting in Paris. And, they achieved the $10 billion goal set for initial contributions to the Green Climate Fund. But, they shirked many big issues as has been the case for the past two decades.

Throughout the conference, world leaders emphasized clarity of the science. Nearly everyone agreed that we must transition away from a fossil fuel driven economic world to clean energy now. However, political convenience kicked the climate-commitment can down the road once again with no specific plans for cutting emissions.

Negotiators simply cannot work out issues of historical responsibility -- developed economies have spewed most of the greenhouse gases into our atmosphere -- versus the loss and damage needs of developing countries.

As expected, the COP 20 Presidency and UNFCCC Secretariat declared the UN climate conference a success by declaring that governments agreed to ground rules on contributions to a Paris 2015 Agreement and a boost to adaptation. This agreement "that will harness action by all nations, took a further important step forward in Lima following two weeks of negotiations by over 190 countries."

Well-informed NGO's countered that "a further step forward" is simply not enough.

The World Wildlife Federation stated, "Political expediency won over scientific urgency." With 2014 poised to be the hottest year on record, "Governments at the UN climate talks in Lima opted for a half-baked plan to cut emissions."

Climate Action Network (CAN) stated, "Governments have signed off on an outcome at the UN climate talks in Lima today which neither reflects the growing public support for the ongoing transition from fossil fuels to renewable energies nor the urgency to accelerate this transition... When it comes down to it, these talks show governments are disconnected from their people who are worried about climate risks and want a just transition to boost our economies, deliver jobs and strengthen public health."

Earlier in the week, people of South America held the largest climate march ever on the continent, uniting across the Americas and around the world.

ACT Alliance, a coalition of more than 140 churches and affiliated organizations, stated, "After two weeks of fruitless negotiations among countries on how to steer clear of irreversible damage from climate change...parties lacked a sense of urgency, refusing to step out of their comfort zones...It is very clear that while no country has had the courage to step up and take accountability for its role in climate change, in communities across the globe momentum for change is growing."

Relief organization Oxfam International called on governments to "Bring solutions not emissions" to COP 21 in Paris. Oxfam organized a visual action, symbolically launching "Big Heads" of State--representing leaders from major countries around the world--off to Paris. 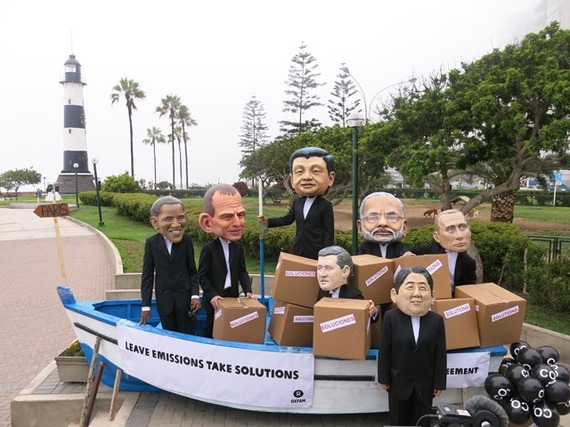 These leaders will encounter stormy seas during the coming year. The outcome in Paris remains an unknown. It is up to the citizens in these countries, and countries around the globe to demand action from our leaders. We need a binding equitable global agreement in Paris based on the known science, not political expediency.