To loosely quote the puppet Lamb Chop, 'This is the media story that never ends... it goes on and on my friend'. And Rush Limbaugh is doing a great job of extending it and ensnaring everyone on network television, including the White House press office. We're guilty too, since I'm about to post Rush's latest challenge to the President. This time he doesn't want the President to fail, but he does want to debate him. He even made up an invite for the Commander-in-Chief. 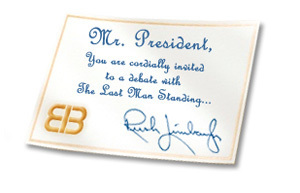 Read an excerpt from Rush's radio transcript below:

But I have an idea. If these guys are so impressed with themselves, and if they are so sure of their correctness, why doesn't President Obama come on my show? We will do a one-on-one debate of ideas and policies. Now, his people in this Politico story, it's on the record. They're claiming they wanted me all along. They wanted me to be the focus of attention. So let's have the debate! I am offering President Obama to come on this program -- without staffers, without a teleprompter, without note cards -- to debate me on the issues. Let's talk about free markets versus government control. Let's talk about nationalizing health care and raising taxes on small business.