Bill O'Reilly wants to see President Obama succeed, he says, but Rush Limbaugh is as adamant as ever that he hopes Obama will fail in the White House. During his Monday radio show, he told listeners that Obama's failure would mean the country would be "saved." "Based on what we've seen with General Motors and the banks, if he fails, America is saved," Limbaugh said. "Barack Obama's policies and their failure is the only hope we've got to maintain the America of our founding."

O'Reilly has a different outlook. Asked if he want Obama to fail: "No. We want him to succeed. We want to persuade him that perhaps some of his policies are not going to help him succeed."

Meanwhile, the DNC rolled out its anti-Limbaugh billboard: 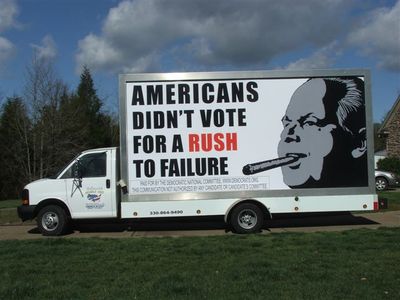