"Operation Chaos," Rush Limbaugh's campaign urging Republicans to vote for Hillary Clinton in Democratic primaries, has been very effective. It doubled Republican turnout in Ohio and Texas, boosting Clinton and prolonging the Democratic race. But in Ohio, it was also almost certainly illegal.

Ohio law requires that citizens genuinely support a political party in order to vote in its primary. To change parties for a primary, a citizen must pledge, under the penalty of election falsification, that she is affiliated with the party and "supports" its principles. Lying on the pledge is a felony, punishable by up to a year in jail and a $2,500 fine. The law also stipulates that poll workers have a "duty" to challenge voters who are "not a member of the political party whose ballot the person desires to vote."

In Cuyahoga, Ohio's largest county, 16,000 Republicans switched parties for the primary last month. Several did so in bad faith, without truly changing parties, according to newspaper interviews and Internet postings. The Cuyahoga Board of Elections recently voted to investigate the matter; a report is expected on March 31. Despite the massive crossover voting, however, prosecutions are considered unlikely. A spokesperson for Ohio's Attorney General told Alternet that it is "very hard to prosecute" crossover voting cases, since the crime depends on proving a voter's motive on Election Day.

Limbaugh's motives, however, have been perfectly clear from the start. "I'm asking people to cross over, and if they can stomach it and I know it's a difficult thing to do, vote for Clinton," Limbaugh said before the Ohio primary. The goal, he explained, was to ensure Barack Obama was "bloodied up politically" and to extend the Democratic primary "soap opera."

Since the Ohio investigation began, Limbaugh has revved up his special brand of self-promotional damage control. He ran several segments defending "Operation Chaos" with the disingenuous argument that politicians also ask for crossover voters. Of course, intent makes all the difference: Reagan Democrats actually supported Reagan. Limbaugh's campaign is under legal scrutiny because he asked people to crossover in bad faith -- to tamper with elections. 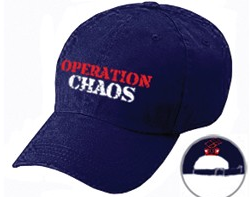 But for $19.95, Limbaugh is still hawking shirts and caps emblazoned with "Operation Chaos," so listeners can join the program's "street team." Wear one of those shirts to the polls, though, and you just might provide enough evidence of the motive needed for prosecution. The shirts list "mission objectives" like "enjoy liberals tearing each other apart," "prolong" the Democratic primary, "drain the DNC of campaign cash," and "win in November."

Finally, Limbaugh is lashing out at anyone who notes that he urged thousands of listeners, whether maliciously or ignorantly, to break Ohio law. He recently complained that NBC's Norah O'Donnell and the New Republic's Michael Crowley dared to discuss the issue. Then he was outraged that Fox's Julie Banderas said election law violations must be "taken seriously" and "Republican shock jocks" were possibly "anti-American" for urging people to break the law. And Limbaugh didn't like my recent criticism, either. When asked about crossover voting during an appearance on C-SPAN last week, I said that people should vote on principle -- not to undermine primary races. I also explained that "Operation Chaos" effectively urged people to break Ohio law, if they voted in bad faith, citing a Wired article. Apparently this observation upset Limbaugh, who recently played the clip while calling out "Stuff it, pal, stuff it!" Now it doesn't take much courage to talk back to a recording, and Limbaugh loves playing up partisan fights for his audience. But this is not only about politics. Limbaugh abused his listeners' trust and encouraged potentially illegal conduct. And after a Republican Justice Department spent years hyping voter fraud charges, now some of the most blatant election law violations are being stoked, repeatedly and unrepentantly, by one of the most prominent figures in Republican politics.

Ari Melber writes for The Nation, where this post first appeared.