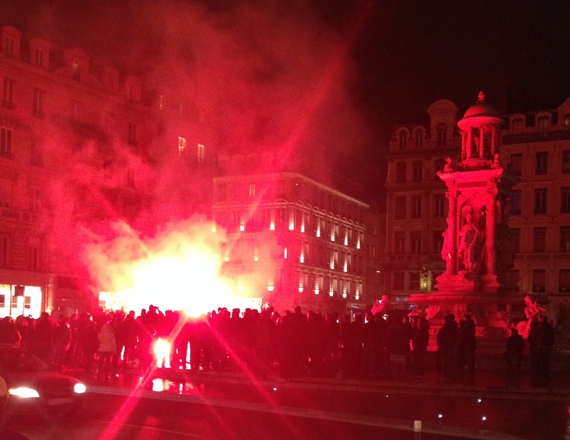 The night after the Charlie Hebdo massacre, I was surprised to hear shouting outside my apartment in Lyon, France. "This is our home!" echoed loudly around our neighborhood. There were roughly 100 men gathered in a nearby square, with banners and bullhorns. "The extreme right," one of the armed policemen standing watch confirmed. They started chanting again: "Islam out of Europe!" "Islam kills!" before they sang the Marseillaise and set off fireworks that sounded like shotguns.

French extremists have the right to voice their opinions, just as the cartoonists of Charlie Hebdo are allowed to lampoon Muslims, the Pope, and the extremists themselves. These rights are hard won and must be defended, especially when they come under violent attack. But we should not react to the Charlie Hebdo attack by railing against Muslims. Some statements simply go too far. It is worth reminding ourselves that restraints on unbridled free speech already exist, and that they can serve a useful purpose.

In the United States, the limits are primarily social. The majority of American media outlets did not reprint the most offensive Charlie Hebdo cartoons. At the New York Times, internal debates reveal that this was an exceedingly close call. Not because the newspaper feared a lawsuit, but because they weighed the value of showing the images against the social cost of insulting a segment of their readers. As executive editor Dean Baquet explained, "We have a standard that is long held and that serves us well: that there is a line between gratuitous insult and satire. Most of these are gratuitous insult."

There is more social leeway to say offensive racist things in France, which is ironic given free speech advocates' preoccupation with the country's hate speech laws. Charlie Hebdo's bread-and-butter has been mockery of a sort that would never pass the New York Times sniff test. Many of Charlie Hebdo's images were juvenile as well as denigrating, and taken as a whole they were not funny enough to keep the financially-struggling publication profitable. Even so, they were in full view on newsstands across the country every week.

If the social restraints in France are looser than those in the United States, the legal ones are stricter. For many Americans, France's hate speech laws seem to come straight from George Orwell's nightmares. It is hard to square that image with the truth that they were passed by the democratically-elected legislature rather than imposed by a dictator. As one French judge explained to me, the restrictions were deliberately placed in the "freedom of the press" law to signal that they were to be treated with the utmost care.

Walking the tightrope between upholding freedom of expression and punishing racist hate speech is difficult, but possible. The French high court examined 105 cases between passage of the law in 1972 and 2012. It sided with restricting speech fewer than 60% of the cases, a rate that dropped to about 40% in the most recent decade. Moreover, Charlie Hebdo has a well-established legal right to produce satire that offends. Since its re-launch in 1992, it has been involved in roughly 50 court cases regarding freedom of expression, but was acquitted far more often than it was convicted. Orwellian scenarios just aren't coming to pass in France, where courts have honed their skills in adjudicating racist speech cases.

It is perfectly possible to feel attached to free speech while seeing value in France's hate speech laws. "Islam kills!" is a horrible refrain, but statements about the relationship between religions and violence must be protected, even if they are couched in shocking terms at extreme right rallies. "Islam out of Europe!" is closer to the French legal line, but probably does not cross it; French law prohibits provocation against groups of people defined by religion, not denigrating a religion itself or challenging its beliefs.

But if the chants had turned into "Muslims kill!" and "Get Muslims out of France by any means necessary!" French law would enable repression of that speech. These statements call for human rights violations against an entire group of people. Especially in the post-Charlie Hebdo context, this kind of inflammatory language harms the public debate more than it contributes to it, and may even endanger lives.

Freedom of speech is vital, but it is not the only value we have. We can defend Charlie Hebdo's right to offend, understand the social reasons why the New York Times did not publish their cartoons, and support legal restrictions on far right attempts to incite hatred and violence. This is a more complicated stance than insisting on free speech at all costs. But it is also a better one.