Since at least 2003, a list similar to the one below has been circulating the Internet incessantly, popping up every so often on people's Facebook feeds infused with speculation about the reasons behind the coincidences surrounding former presidents Abraham Lincoln and John F. Kennedy.:

The names Lincoln and Kennedy each contain seven letters.

Both were particularly concerned with civil rights.

Both wives lost their children while living in the White House.

Both Presidents were shot on a Friday.

Both were shot in the head.

Both were assassinated by Southerners.

Both were succeeded by Southerners.

Both successors were named Johnson.

Both assassins were known by their three names.

Both names are comprised of fifteen letters.

Booth and Oswald were both assassinated before their trials.

In January, Snopes presented a point-by-point refutation of these similarities. The complete take-down is here, but below are some highlights: 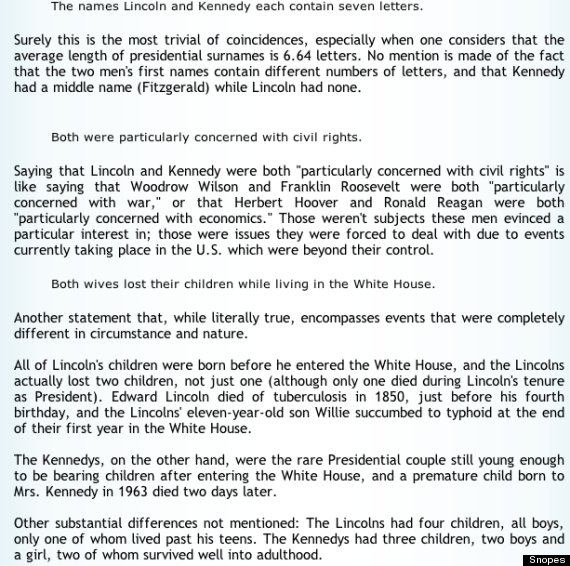 Snopes also points out that there is no record of Lincoln having a secretary named Kennedy.

The list has been subject to mockery by one of Harvard's farcical Demon Magazine which included amazing similarities between the two Presidents such as "When Kennedy was shot, the car he was riding in was a Lincoln. Lincoln's last name was Lincoln," and "Both men (except Kennedy) were born in log houses."

Despite the fact-checking and mockery, the "coincidence" list refuses to die.

One reason may be what Scientific American's “Michael Shermer calls "patternicity,” or people's tendency of finding "meaningful patterns in meaningless noise."

Shermer argues that humans are evolutionarily predisposed to looking for patterns in our environment. Our ancestors were those who were most successful at seeing real patterns and adapting to them, but this also means we're more likely to think we recognize patterns where none exist.

Perhaps this is what's happening when people are amazed by these Lincoln-Kennedy coincidences. They may at first seem meaningful, but, as Snopes argues, under closer inspection they don't speak to any meaningful patterns.

CORRECTION: An earlier version of this story gave the incorrect name of the 35th president. It is John F. Kennedy, not John Kennedy, Jr.