Make room on the mantle for one woman in Maine to get mother- and grandmother-of-the-year awards.

That's because 49-year-old Linda Sirois gave birth to her own grandson earlier this month.

That accomplishment might sound complicated, but actually Sirois acted as a surrogate for her daughter who has a heart condition that makes it unsafe for her to become pregnant, the Portland Press Herald reports.

On Aug. 13, Sirois gave birth by C-section to 7-pound, 14-ounce Madden Hebert as his mom Angel Hebert stood nearby, the Daily Mail said

"It was all pretty simple as far as I was concerned," Sirois told the Portland Press Herald. "I just saw it as I was babysitting for a few months."

Sirois told her 25-year-old daughter for years that she would be a surrogate if Hebert was unable to get pregnant. Hebert and her 29-year-old husband, Brian, were told just that by a doctor last summer, the Associated Press reports.

"It was pretty disappointing and we were pretty upset about it," Hebert told the Portland Press Herald. "But we kind of had an idea that it was a possibility and, all along, my mother was saying, 'I'm here and I can carry for you.'"

Sirois made good on her offer and had Hebert's egg -- fertilized with her husband's sperm -- successfully implanted.

She told the Herald that compared to her four previous pregnancies, this one may have been the easiest, with no morning sickness or complications.

"It was awesome," Hebert, who was in the delivery room with her mother, told the Herald. "It was an awesome, awesome experience."

Sirois told the Herald it's not unusual for a grandmother to be a surrogate for her own grandchild.

"It was their child all along," she said. "It was just a room for rent." 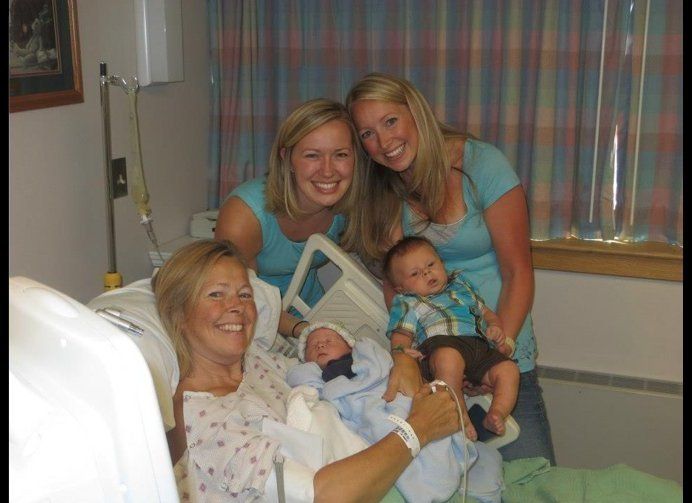