I'm a huge True Blood fan. I've read the books, I've watched every episode. As far as I'm concerned, vampires have not overstayed their welcome. Alright, maybe the Twilight vampires. I just got a chance to chat with Lindsay Pulsipher who plays Jason Stackhouse's love interest, Crystal. (I did her makeup for the upcoming film, Do Not Disturb.) She had a pretty big revelation this week. And yes, we do mention what it was. If you're afraid of spoilers, I'll mark it in the question so you can skip that one. Lindsey gives us all the info about playing a character who is constantly sporting a black eye, nudity on camera and what it's been like to work with an engaged couple planning a wedding on set. Of course I'm talking about the recently married Anna Paquin and Steven Moyer. She also lets us know what it's like to have wild animals on set. No, I'm not talking about her co-stars. (Please, Charlaine Harris fans. If you've read the books, don't spoil plot points in the comments section without a spoiler alert!) 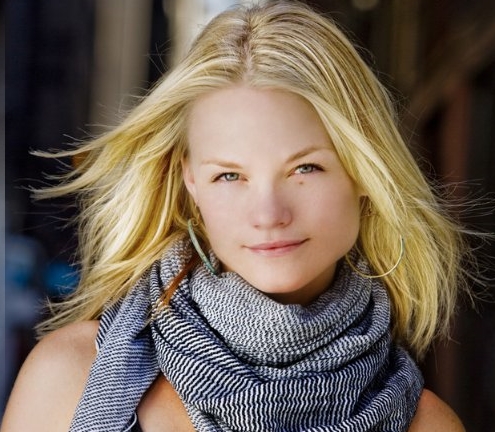 Did you watch the show before you auditioned for True Blood?

Did you know what character you wanted to play?

Well, you know I hadn't ever read the books. I hadn't read the books yet, so I didn't know who Crystal was. And when I got the audition, she was described as this mysterious girl who runs through the woods. That was all I knew. [laughs] So I really didn't know where they were taking her and what was happening. I was surprised when I found out who she was in the books. I thought, oh this will be a really fun character to play.

When did you find out what Crystal is?

[SPOILER IF YOU HAVEN'T WATCHED LAST WEEK'S SHOW] I found out pretty quickly afterwards. I have friends that are really big fans of the books. And when I told them who I was, it was an immediate, 'Oh my god, you're a werepanther! You're a werepanther! And it was just like... I don't even know what that is, but cool! [laughs]

The transformation is really cool. I know they used real wolves for the werewolves. Are they using real panthers?

You know what? There were panthers on set. You couldn't really tell last night, but they were real and they're just so beautiful and they're some of the most majestic creatures I've ever been around. They were just incredible. They're so beautiful!

In the book, she's very different. She's described as short and dark... have you read the books since?

Crystal has a difficult time of it. She's getting punched, she constantly has black eyes... what is that like to play as an actress?

You know, it's really fun. It's always exciting when you have something physical to throw yourself into. I like to describe it as a playground. True Blood is truly a playground. You get to go in and just let loose and completely just have fun and play around. There is so much freedom on set. It was so much fun to go through all of those different things. It was always exciting.

How deep have you gone into the mythology? Into her character and what the town of Hot Shot is?

Well, I've heard from (creator) Alan Ball. He's told me basically the idea of Hot Shot but because I hadn't read the books, I didn't know (author) Charlaine Harris's take, her intentions and how she had written it. But Alan was very in depth about her history and how she had kind of been trapped on this compound. She has this very secluded life and she didn't have any social interactions. She's kind of a prisoner in her own little world, in a way. For her, Jason (Ryan Kwanten) was a relief. And escape from that world. She was feeling claustrophobic and ready to leave. So when she meets Jason, it's like, okay. Finally, I can maybe get out of this. But it doesn't come without repercussions. [laughs] There is a lot to get rid of from Hot Shot before she can actually leave.

The relationship with Jason is great. What's it like working with Ryan?

[laughs] Ryan is an amazing actor. He's so talented and so fun to work with. He really knows Jason Stackhouse in and out. It's just funny to watch him. He improvises and does these really spontaneous moves in his acting. It's really fun to watch. He does it on purpose. He does these little things to catch you off guard. It actually keeps it fresh and fun, and each take is different. For an actor, you kind of hope for those moments and those happy mistakes. And there are a lot of those.

Every time I speak to him on a red carpet, I'm always stunned by his Australian accent. You have quite the accent in the show. How hard was that to handle?

[laughs] You know, it's funny. I have some friends from the South, so they helped me a lot. And I listened to interviews. I went online and listened to different people with the accent. I listened to how they talked and just mimicked them. And when I went in for my audition that's kind of how I prepared. So far, so good. They haven't said anything! [laughs]

I've had endless discussions about the show and I think that one of the things that make it so successful is that it has no boundaries. When you were cast in this, was one of the first thoughts you had about how you'd probably have to do nudity?

[laughs] Oh yes! That definitely crossed my mind! Especially when I knew I was going to be Jason Stackhouse's love interest. [laughs] Okay, so the clothes are coming off! But all of that just sort of falls to the background. You don't really think about it. I was just so excited to be on the show and thought, oh well, I can totally handle that!

[laughs] Besides, everyone on the show is naked anyway!

I've done shows with engaged people and sometimes performing and planning a wedding can... be a bit much. How was it on set with Stephen and Anna?

Oh my goodness! They couldn't be any more mellow and relaxed! They're just so calm, cool and collected all the time. They're so sweet and a really lovely couple. You can just tell that they're so much in love. But it's never a showy thing. It's just a very matter of fact thing. It's really beautiful.

Alan will sometimes give us some spoilers, but I'm curious what kind of non-disclosure agreement you had to sign when you were cast.

You know, I actually didn't have to sign anything. They actually just kind of trust us, which is a huge honor and a huge pressure. [laughs] I have to say, I am very relieved that Crystal's true identity is revealed, because that was really hard. Avoiding that question. But you kind of just respect where they're coming from when they ask you not to talk about things. As a viewer, I don't want to know what's going to happen. I just want to watch and find out for myself. Also, I never want to give anything away to viewers of True Blood, and it's better when you're surprised. I think everyone on the show gets that. They respect that.

You've got the fans who've read the books and the fans who just watch the show. In most articles (including this one) we ask people not to spoil anything in the comments section. Are you ever discussing the show with book fans just to have others in the group freak out?

[SPOILER ALERT] Oh yeah! [laughs] I've actually had people start coming up to me when I'm out and about. And a couple of them have just asked, 'Are you a werepanther?' And I'm just like, 'Watch the show and you'll see!' It's a battle even between my friends. Some people love the show and they're like, 'Don't tell me! Don't talk about it while I'm here.' It's definitely a tricky situation.

Is there anything that you can tease for the final two episodes?

Well, let's see. You haven't seen the end of Crystal. There's a couple more final blow outs with her and Jason. I don't know what to say! [laughs]

What else do you have coming up?

Well, I have a couple of projects that are coming out later this year. I did a film called Do Not Disturb that you might know a little something about. [laughs]

Yeah, I remember something about makeup. [laughs]

[laughs] And that is a Mali Elfman/Maureen Flannagan production. And I'm starring with Eric Balfour in one of the segments called 'Rocket Man.' And I also have a film called The Oragonian which is a thriller/horror film. It's really unique and something I've never really done before. I play this girl that gets into a car accident and is trying to decide if she's alive, dead or in purgatory. And it's her journey to figure that out. I saw a rough cut and it's really unique and exciting and different.