Two women have been placed on unpaid leave from their jobs after a Facebook photo taken at Arlington National Cemetery angered thousands online and led to a petition for their resignation.

Lindsey Stone, of Plymouth, Mass., was on a work-paid trip to Arlington National Cemetery in October when she posed for the photo in question, CBS Boston reported. In the photo, Stone stands at the Tomb of the Unknown Soldier next to a sign that reads "Silence and Respect," giving the middle finger and pretending to yell. She then posted the picture to her Facebook page.

The photo, which was taken by a co-worker of Stone's, went viral as online users criticized Stone for her insensitivity, according to the station.

Stone attempted to quash the outrage in a Facebook response.

"Whoa whoa whoa... wait," she wrote on Oct. 20, according to Gawker. "This is just us, being the douchebags that we are, challenging authority in general. Much like the pic posted the night before, of me smoking right next to a no smoking sign. OBVIOUSLY we meant NO disrespect to people that serve or have served our country."

Stone "disrespected every man and woman far greater than herself with the actions shown in my profile picture," reads the Facebook group's description. The page demands for her resignation from Living Independently Forever, Inc. (LIFE), a non-profit organization in Hyannis, Mass., that assits adults with disabilities.

News of Stone's controversial Facebook photo spread to LIFE, and the organization placed Stone and her co-worker on unpaid leave pending an internal investigation.

This photograph in no way reflects the opinions or values of the LIFE organization, which holds our nation’s veterans in the highest regard. We are proud to have veterans serving on our staff and board of trustees, and we value their service. The men and women who have selflessly fought and sacrificed their lives to protect the rights and lives of Americans deserve our utmost respect and gratitude. We are acutely aware that this photo has done a disservice to veterans and we are deeply saddened that it was taken and shared in a public medium.

The Facebook group against Stone currently has more than 5,000 "likes."

LOOK: This photo of Lindsey Stone at Arlington National Cemetery landed the LIFE employee in hot water on Facebook and with her employers. 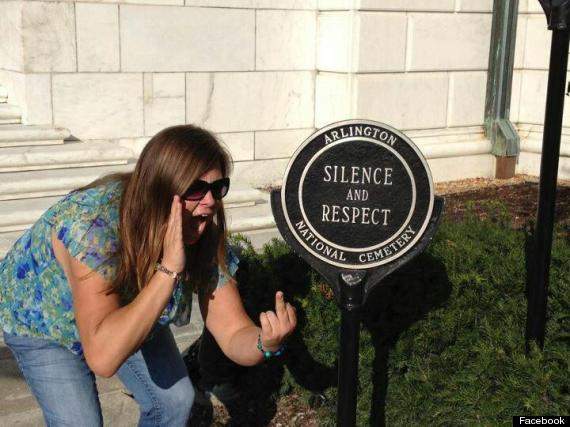