Richard Lindzen, an MIT professor and longtime climate contrarian, turned to the Wall Street Journal to rehash a series of oft-disproved claims that deny the growing and now unequivocal evidence of climate change, all in defense of a fellow "skeptic" whose ties to fossil fuels have called into question the impartiality of his science.

Lindzen's arguments are a greatest-hits of climate denial, repeatedly and effectively disproved for years. He uses these easily dismissed arguments to defend what's left of the academic integrity of Wei-Hock "Willie" Soon against questions raised by members of Congress, who heard testimony from Soon without disclosure that he was being paid by fossil-fuel interests.

Mainstream models have been accurate, Lindzen hasn't.
Lindzen makes the tired and debunked claim that predictions of warming haven't been accurate. This is absurd on its face, as 2014 was the hottest year on record, with an unprecedented spike in ocean temperatures. Peer-reviewed studies have shown that model criticisms are totally "unfounded" and that models incorporating the newest information (mainly ocean heat content) are very accurate. Interestingly, comparisons have been made between Lindzen's 1989 predictions and those made in 1988 by James Hansen, former director of NASA's Goddard Institute for Space Studies. The results are clear that mainstream scientists have gotten it right while Lindzen underestimated warming. 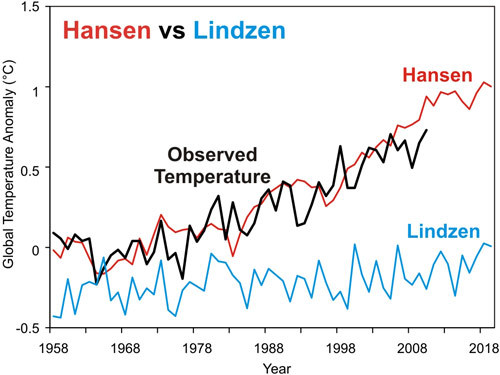 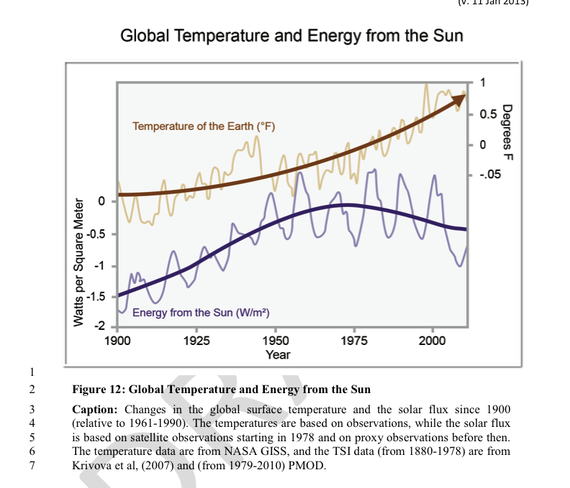 (Image from the National Climate Assessment)

More clouds won't offset warming
Lindzen also refers (without citation) to his hypothesis that clouds will cancel out warming. What he doesn't note is that this "Iris hypothesis" has been debunked numerous times, and while cloud behavior is an ongoing area of study when it comes to climate models, clouds may actually increase warming, not offset it as he claims.

$1.2 million is no "small measure" of funding
Soon took over a million dollars from fossil fuel interests in exchange for studies which cast doubt on the CO2-climate change connection in both academic papers and congressional testimony. Soon's contracts went so far as to give funders early access to papers and an explicit agreement to keep the funding relationship secret. Soon told his funders that these activities were "deliverables" yet he failed to disclose this critical fact in the papers. This is as serious as it comes in terms of breaching academic ethics, and has also triggered an internal investigation at Soon's employer.

Congress should know who's sponsoring testimony
Lindzen attempts to redirect attention away from the clear wrongdoing of Soon to the actions of Arizona Rep. Raul Grijalva, who sent letters to seven universities inquiring as to the funding of other witnesses used by the GOP to argue against climate action. As Grijalva states in his letters, this information is vital to disclose because Congress "cannot perform our duties if research or testimony provided to us is influenced by undisclosed financial relationships."

This is not an isolated incident, so Rep. Grijalva has reason to be concerned. As outlined in multiple books (and now a documentary film) the tobacco industry pioneered a method for disputing scientific reality for the purpose of preventing regulation, and the fossil fuel industry has been following this playbook since the 1990s. This strategy involves paying scientists to produce studies contrary to the consensus, testify to Congress disputing the established body of science, and otherwise introduce doubt into the public consciousness where none exists in the scientific literature. This is exactly the behavior of which Soon is guilty, so Rep. Grijalva was right to be concerned about a more widespread coordination of pseudoscientific lobbying against regulations.

Lindzen also writes that he finds it strange that others sent letters to think tanks that promote climate denial, as though he's unaware of the bombshell 2013 study that shed light on the $120 million given to anti-climate groups between 2002 and 2010.

Finally, Lindzen ends with one of the newest fossil fuel talking points, which claims that reducing emissions will somehow hurt the poor. This too is clearly contradicted by the fact that the poorest are least capable of adapting to a changing climate, and those who are actually bringing power to the impoverished are doing so with renewables, not fossil fuels. For example, India's Prime Minister has a goal to bring electricity to all of India using renewables, not fossil fuels.