One man shows. One woman shows. Solo performance. Autobiographical theatrical memoirs. You know the genre, right? Very popular in the theater these days. Especially for the producer. Why not? You have a very small cast -- one person, and a small, portable set that can usually be in and out of your theater without a trace, with a very affordable budget.

Popular for the performer, too. Why not? It's all about them. They don't have to work out their life's battles and struggles in therapy for years; they can just blurt them out on stage in front of all their friends and family, some of whom had the naiveté to come to the theater without knowing that they would be humiliated in public. And, hey, if they're lucky, the solo performer might even get a role in a film or TV series, like Whoopi Goldberg, John Leguizamo or, well, somebody. 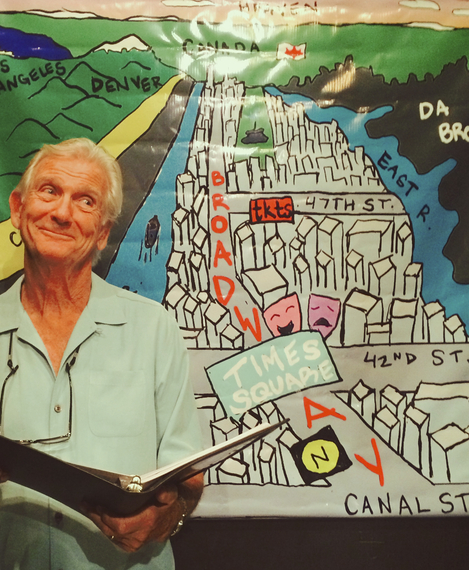 Audiences? They usually avoid these solo shows like the theatrical plague. Unless they have to go because their friend is doing one. Or, because, occasionally, one might actually be good.

Critics? They won't go to a solo show anymore because they swear that so many of the shows are just downright bad -- self indulgent, painful to watch (no less, review) often without craft and, frequently, just a narcissistic exercise in whining and recreating the painful past.

But, I beg to differ.

I have seen some great and powerful solo shows in my last 40 years in the theater: Paul Linke's Time Flies When You're Alive, Kedric Wolfe's Warren's Story, Chazz Palminteri's A Bronx Tale and almost anything Spalding Gray did after the early 1970s: Swimming to Cambodia, Monster in A Box, Gray's Anatomy, It's a Slippery Slope. I've seen them all. Spalding Gray? You know him, right? "The goyish Woody Allen?" The New England WASP who spun his paranoid, poignantly funny neuroses into beautifully poetic, autobiographical monologues? Or, as I like to call him, "the grandfather" of modern solo performance. The artist who inspired Eric Bogosian, Danny Hoch, Heather Woodbury, Sara Jones and the current king of the solo heap, Mike "Marathon" Daisy.

Me? I've written, performed and taught solo performance for the last 27 years. My first show, Down... but Not Out was Shortlisted by the London's Independent for "best" show of the 1988 Edinburgh Fringe Festival. And, just this last month, Eve Brandstein presented An Evening with Eric Trules at L.A.'s most historic literary venue, Beyond Baroque, in the old Venice City Hall.

I'm not famous; it's not why I do it. I do it to "make art out of the fabric of my life," and to find something universal from the microcosm of my own life's experiences. I believe I was the first solo performance teacher at an American university (I am still teaching at USC), and I believe powerfully and mightily in the art form.

Solo performance is an art form of its own. Autobiographical storytelling is different than solo performance where the performer presents a series of characters, for example, like Whoopi Goldberg, Eric Bogosian, Danny Hoch and Lily Tomlin did. These "character" solo masters were extremely successful because the people were terribly funny and insightful as writers, and, they were comic geniuses as performers. (Jane Wagner wrote for Lily Tomlin, and Whoopi started her multi-faceted career in show biz as a solo performer in San Francisco with her own Spook Show of solo characters, which was brought to Broadway by Mike Nichols, and seen there by Steven Spielberg, who cast her in The Color Purple. The rest, as they say, is history.) However, autobiographical solo performance storytelling is, as Spalding would call it, a much more "slippery slope." 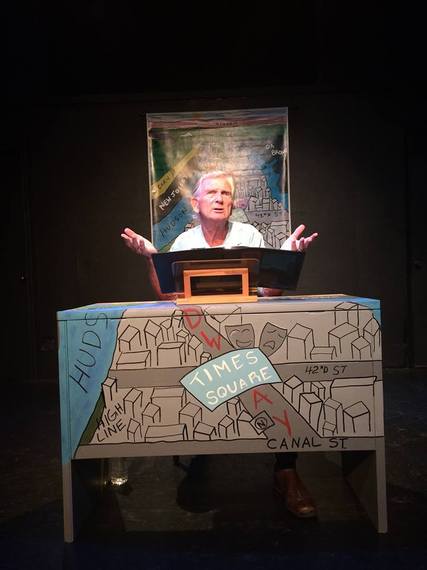 There is a craft to autobiographical story telling that allows the careful, inspired and knowledgeable solo artist to transcend the pitfalls of myopia, self-indulgence and being just a plain, pain in the -- theater -- for the audience.

First, there is a solo performance -- first person "voice," which is different than the voice of the novelist, journalist, diarist and different from all other first person voices of the writer. What makes it different is that it must be "experiential." It must bring the audience out of their seats, and up onto the stage with the monologist. The traditional "fourth wall" which insulates the actor from the audience is usually broken.

The successful autobiographical soloist often addresses the audience directly, including the audience in the storytelling. Character solo performing does this too, but I find that solo "characters" are usually only "two dimensional," which allows for far less empathy from the audience. Bogosian's many wild and crazy street people and Hoch's Iowan, white teenager trying to become a black rapper are often funny as hell, but, frequently, at the characters' expense. We laugh at the characters, not with them. The writer is more an insightful social critic than a forthcoming, vulnerable human. And, as I always tell my students, both professional and academic: "Your vulnerability is your greatest strength." Look at your favorite characters in films: Rocky, Juno, Marty -- I could go on and on.

Second, the solo writer must know how to construct a story -- just like storytellers in other mediums: novels, plays, campfire tales and screenplays. It has always been this way. A good story is a good story. It has a beginning, middle and end. Something must be powerfully "at stake" in the beginning of a good story to propel it forward, to entice the audience into the "conflict." No conflict? No story.

An audience does not want to hear the story of a Hallmark card, or a trip to Disneyland, unless it is the trip from hell. The conflict must project the story and the audience forward into the second act, where the story "develops" with twists and turns, and hopefully suspense, until the conflict is paid off and resolved in the third act: happily in a comedy, and miserably in a tragedy. This is not new stuff. It goes back to the Greeks, and probably the cave dwellers. It's just that most solo storytellers forget about it completely.

Third, the solo writer must have an "artistic point of view." The audience just doesn't want to hear any tall tale: a festive food fight, or an ugly rape story. They paid twenty bucks for their ticket. They want edification, or "catharsis" as the old pedagogy goes. They want to walk away being touched -- thinking, savoring the story long after the lights have come back on in the theater. Otherwise, they should, rightfully, ask for their money back. "Hey, box office dude. That solo show was only worth $6.50. It was all about that jerk on the stage. What about us out in the audience? Nada? I want my $13.50 back." And, I think they should get it!

Unless the artist can see something universal about their own story, why the hell have they brought it to the theater for in the first place? As I said at the top, leave your "stuff" in the therapist's office. But if the solo artist can tell me about my life, through their life, okay. Then they can have my twenty bucks, and more. If, through their insight about their parents' own divorce, they can tell me something about my parents' divorce, and the unsettling and uncomfortable consequences it had upon me and my siblings, and they can make me laugh and cry in the same moment, then, hey -- you won't be able to keep me away from that theater. Insight, baby! 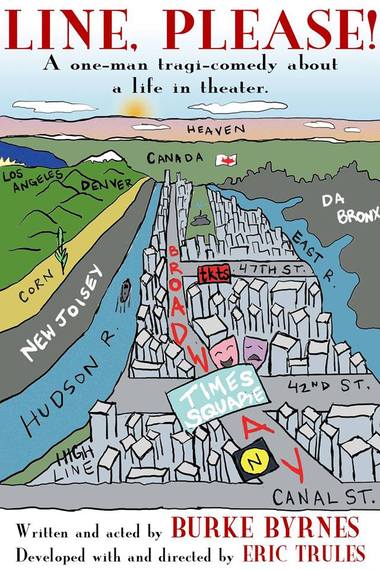 Too often, actors looking for work in the film and TV biz, think that doing their own one-person show will be their best and fastest route to stardom. Look at Whoopi. Look at Leguizamo, who, by the way, moved from early character solo performance to more and more autobiographical solo performance. "Hey, if those actors could do it, why not me?" Right? Wrong!

A great theater solo artist is as rare as a great artist in any field: novelist, playwright, painter, dancer, musician -- you name it. Not only does the artist have to have a unique voice, chutzpuh, courage and dumb luck, they must also have longevity. They must be able to do it over and over with consistency. They must survive artistic failures and harsh criticism, find a way to support themselves financially and be able to live with the fact that they will probably never become as "successful" as Whoopi, Spalding or even Chazz!

Burke Byrnes is doing a new solo show that I recently developed with him. It's called LINE, PLEASE!, and it is slowly making its way out in the world, one show at a time, as these things tend to evolve. It's a beautifully courageous story from a 77-year-young actor who is losing his memory. He can't remember his lines anymore, hence, the title of the show. Burke tells of a painful and humiliating journey as he grows from being a young, working L.A. actor to a hapless, New York senior actor, who has to quit an off-Broadway show because he can no longer keep up with the young cast.

He tells the story with such tremendous insight and humor, that by the end of the piece, the audience, young and old, usually reward him with genuine applause and occasional tears. He, as an actor and artist, even gains some painful and graceful acceptance, along the way.

I think that Burke's solo piece is a good demonstration of a storyteller making art out of the painful fabric of his own life. He digs deep and makes the audience laugh -- two things too many solo performers forget, or don't know how to do. I recommend you check the show out, this month at the Odyssey, or when it makes its way to New York, or to your town -- Maybe even to the local senior center, where the old folks can certainly empathize with young Burke.

Other than that, I hope you'll go to the theater. Period. It's a dying art form. Or, to see some good solo performance. Maybe you'll remember use some of my terms to see if you agree with me about what makes one show transcend the ordinariness of one person's life to become a story about all of our lives.

I truly hope you do. 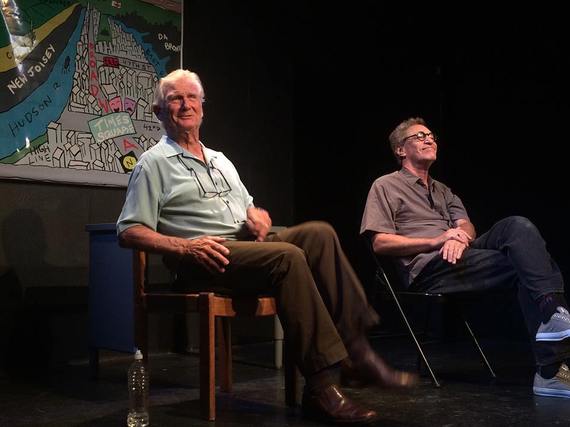 LINE, PLEASE! will be at the Odyssey Theatre Ensemble on Sunday February 8 & 15 at 6pm. Please go to this link for ticket information: http://www.odysseytheatre.com/solo_performances.php

And his travel blog, "e-travels with e. trules" here: www.etravelswithetrules.com/blog