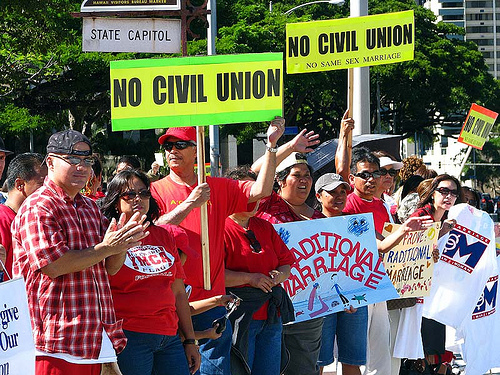 Yesterday, Governor Lingle vetoed a democratically passed civil unions bill in Hawaii. The bill, supported by more than the majority of state house and senate representatives, barely failed to gather the two-thirds vote necessary in the senate (alone) to override a veto.

On Tuesday, Lingle retires having served two terms as Governor. The veto was one of her last acts in office. She hopes that the question of civil unions will go to a public vote.

Public votes on same-sex rights rarely result in a positive result for equality advocates. This is not because same-sex relationships are so abhorrent to the public that they are consistently rejected. It is because civil unions and all equality rights are about restoring basic rights to a minority suffering discrimination under the power of the majority. Leave minority rights to a majority vote and you will almost always see a result that favors continued discrimination. This is why the fact that ballot measures are passing state houses and senates across the country is so remarkable in the first place.

The Senate does not, still, have the votes necessary to override a veto and even after waiting until next session and managing to bring the civil unions bill back to the chamber's agenda, it may not pass with a two-thirds majority.

All of this is most infuriating because Lingle could have let civil unions lie with no political cost to herself. She is a Republican Governor, yes, but one on the way out with a state legislature that clearly supports the measure. She could have done nothing, retired, and left her successor with a clean political slate. The gains of the Republican Party will be minimal in terms of support for a new candidate.

The cost to Hawaii's tax base (most same-sex couples who choose to enter into a civil union would pay more taxes under the Bill) as well as its citizen's rights will be huge.

Lingle assures voters that, "My personal opinion is not the basis for my decision ... Neither is my veto based on my religious beliefs ... I am vetoing this bill because I have become convinced that this issue is of such of societal importance that it deserves to be decided by all the people in Hawaii."

But Lingle is not so stupid as to think that minority rights are fairly treated in majority votes. This was a personal decision, a last exercise of power to satisfy a fading governor's religious convictions days before her retirement. It is a cruel move, one that, I hope, Lingle is remembered for.