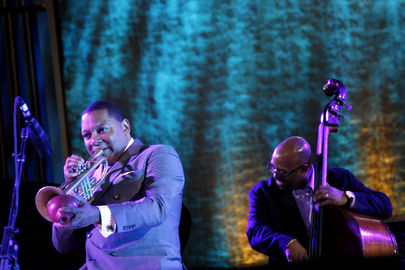 The Louisiana Gulf Coast and New Jersey Shore stand out as two American regions most traumatized by hurricanes in the last few years. Yet, while the losses for many will be lasting, the mood of tragedy is being gradually lifted by a refreshing storm of culture, particularly in music. I've had the opportunity and privilege to call both my home, but the links may be more than surf-deep. In many ways the Jersey Shore is to New York City what Acadiana (Cajun areas of Louisiana) or the Ninth Ward are to New Orleans, not only funneling talent to the metropolis but also nurturing its own breed of music and unique sounds from Bruce Springsteen, Frank Sinatra, Buckwheat Zydeco, to The Neville Brothers.

Traveling back to New Orleans two years after Hurricane Katrina, the city was still scarred and wounds were still open in the people and fabric of the city. Nonetheless, the citizens had something as valuable as a life preserver to carry them through -- the sense of being unique and that the city could not simply be wiped away. (Soon after the Hurricane some Americans wondered why not simply abandon New Orleans as uninhabitable due to its below-sea level location and vulnerability to storms/floods.) Where some areas of New Orleans appeared forsaken, there had also been an influx of artists sensing the phoenix rising. We entered a club empty of tourists only to hear a band just migrated to the City. While there was no audience to applaud and encourage, they still performed as if auditioning before the music gods of New Orleans whose spirit had never left. Big Al Carson dominated (literally and musically -- on his promo he was listed as a 495-pound blues singer) the stage at Lafite's Pirate Lounge. He was not the "Biggest Loser" -- he had to be airlifted out of his flooded New Orleans apartment during Katrina -- but the night we saw him would be his last before he would wed his longtime sweetheart.

The Jersey Shore faced no less a force of nature in Hurricane Sandy. It battered the "Tri-State" area including my home on Staten Island in New York City. Many lost more than houses, business, and possessions as loved ones were swept away in the storm surge. The Jersey Coast though faced the more formidable recovery - we had to be convinced that the ocean waters that bombarded the coast would once again welcome us as summer visitors or residents. We were told that the Shore was "Stronger than the Storm," and was again spruced up to welcome us. It was only though when we heard the music that we felt it.

Bruce and Southside Johnny and the Stone Pony have made Asbury Park world-famous. More recently, Long Branch and Red Bank have joined Asbury as the new trinity of Jersey and also New York sound. (It was New Jerseyites Jon Bon Jovi and Bruce who led the Benefit Concert for the entire New York Tri-State Area immediately after Sandy. Clubs in these towns are more about the live music than the rave. As impressive are the many free concerts hosted along the beaches, parks and boardwalks. From new rising talents like Dubliner Steve Reilly to more longstanding acts as "Tim & Andy" (Tim Cusack & Andy Russo) the Shore has become the breeding ground for both evolving original sounds and great cover performers. http://stevereillymusic.net/

The Jersey Shore Jazz and Blues Foundation stands out as the cornerstone and catalyst for much of the revival and growth. It operates on a shoestring budget supported by grassroots supporters but manages to present intensive, compelling performances in the rich menu of forums offered along the Shore. http://www.jsjbf.org/index.php

Most recently, they presented a day-long concert series headlined by South Jersey resident (Little Egg Harbor) Rob Paparozzi. Looking around at the audience in Long Branch, I saw a mosaic of concert-goers. Mixed with the locals and American tourists were many overseas and European tourists all enjoying a night out under the stars swaying to the beat.

Paparozzi's rendition of "Louisiana -- they are trying to wash us away" linked the two states both in experience and struggle to rise above the waters and naysayers. Eight years ago, Hurricane Katrina hit the coast of New Orleans on August 29, 2005. The song was a fitting tribute and proved that where there is music, the Soul will thrive even as the body rebuilds. As they say in New Orleans, "Le Bon Temps Roulet"! -- Let the good times roll!