Not only is "prostitution" a tagged skill you can select on LinkedIn*, there are actually escorts who advertise their services on the professional networking site. Now LinkedIn is making sure everyone knows that the practice is not OK.

LinkedIn just changed its privacy policy and user agreement and now explicitly bans escorts from using the site to get clients. The new user agreement states that you must not: "Create profiles or provide content that promotes escort services or prostitution" even if prostitution is legal where you live.

LinkedIn has always prohibited "unlawful" profiles and that this change in its user agreement just makes prostitution more explicitly prohibited, since prostitution is legal in some parts of the world.

If you thought that this change in policy was perhaps just some sort of formality, think again. There really are prostitutes using LinkedIn to make connections. A quick search reveals there are a whole lot of "escorts" and professionals who offer "nude massage." A few that we found are shown below: 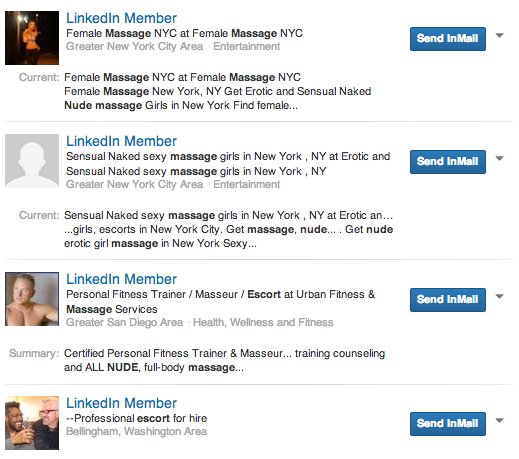 UPDATE: This story has been updated to reflect comments from LinkedIn clarifying the changes in the user agreement.