Two lion cubs rescued from a ravaged Gaza zoo have a new home at a wildlife sanctuary in Jordan.

A man purchased the brother and sister from the Rafah Zoo earlier this year, according to a press release from Four Paws, the international animal welfare group that facilitated the cubs' rescue. 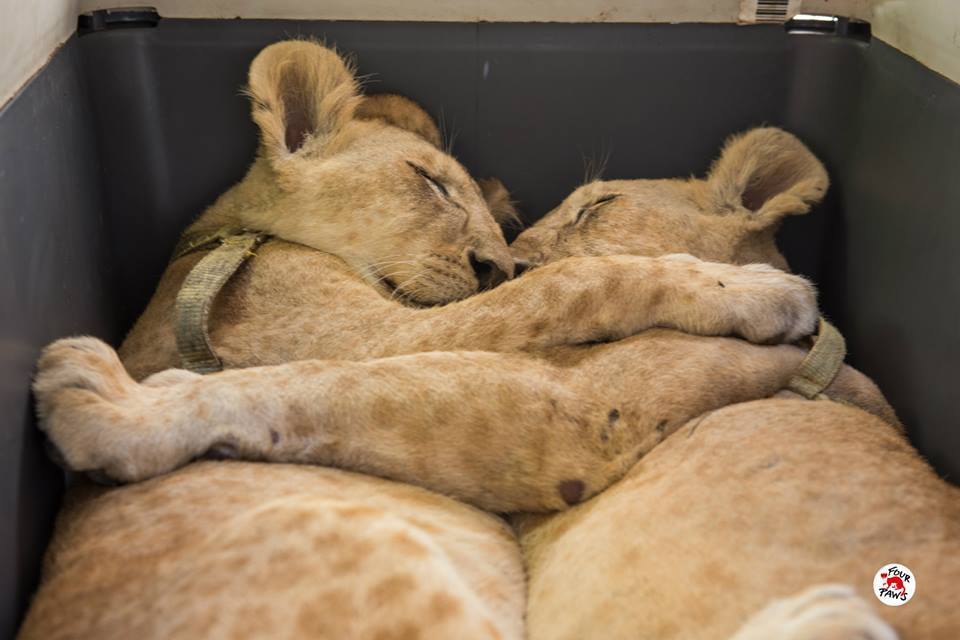 The cubs cuddle in one crate during a rest stop along the way. The two cubs had their own individual crates during transportation. (Four Paws/Tom Benda)

The Israel Defense Forces demolished the zoo in 2004, and the facility has struggled to recover. Zoo owner Mohammed Ahmed Juma told Reuters in March that he sold the cubs because the profits would help him feed the remainder of the animals.

Saad Eldeen Al-Jamal, the man who bought the cubs, told Agence France-Presse at the time that the animals were "like members of the family" and loved playing with his children in their home at a refugee camp in Rafah. Though he had the best of intentions, he soon found he had more than he could handle. Al-Jamal had trouble affording the huge amount of meat the cubs required, and was considering "leasing" them out to amusement parks, restaurants and resorts for extra cash, AFP reported. 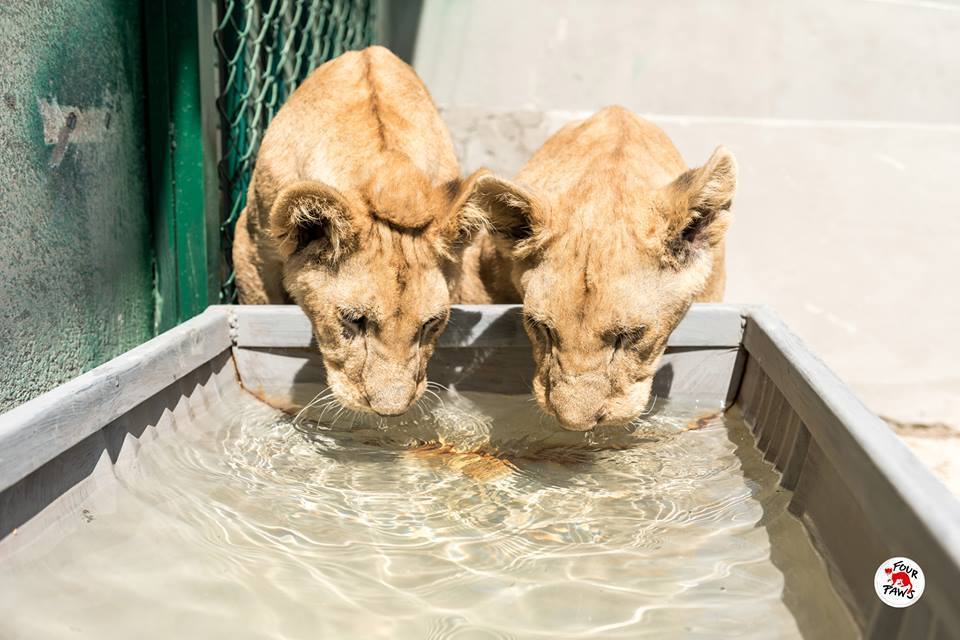 "Both cubs have already grown quite a bit bigger and stronger since their arrival in the refugee camp, and they now represent a significant danger for the inhabitants of the camp," Khalil said in a June statement.

"They should be given a beautiful, safe home -- and not be sold on to another zoo in the area!" he said.

Four Paws workers had been in the area twice before, spokeswoman Claire LaFrance told The Huffington Post. In September 2014, they rescued three lions from the "heavily-damaged" Al-Bisan Zoo, and in April they carried out an emergency relief mission to Khan Younis Zoo, bringing food and medical treatment to the animals. It was shortly after the April mission that the group received word of the Rafah cubs, LaFrance said.

Al-Jamal ultimately agreed to turn the animals over to the Four Paws team, which brought the cubs to a temporary outdoor enclosure in Jordan on Sunday evening. Though an earlier press release stated the cubs would be released in their permanent home at Al Ma'wa for Nature and Wildlife, a Jordan wildlife sanctuary, in the fall, LaFrance told HuffPost on Thursday that the cubs have already made it to the sanctuary.

Al-Jamal and his family had previously called the lion siblings "Alex" and "Mona," but Four Paws workers changed their names to "Salam" and "Shalom" to symbolize a hope for peace in the region. 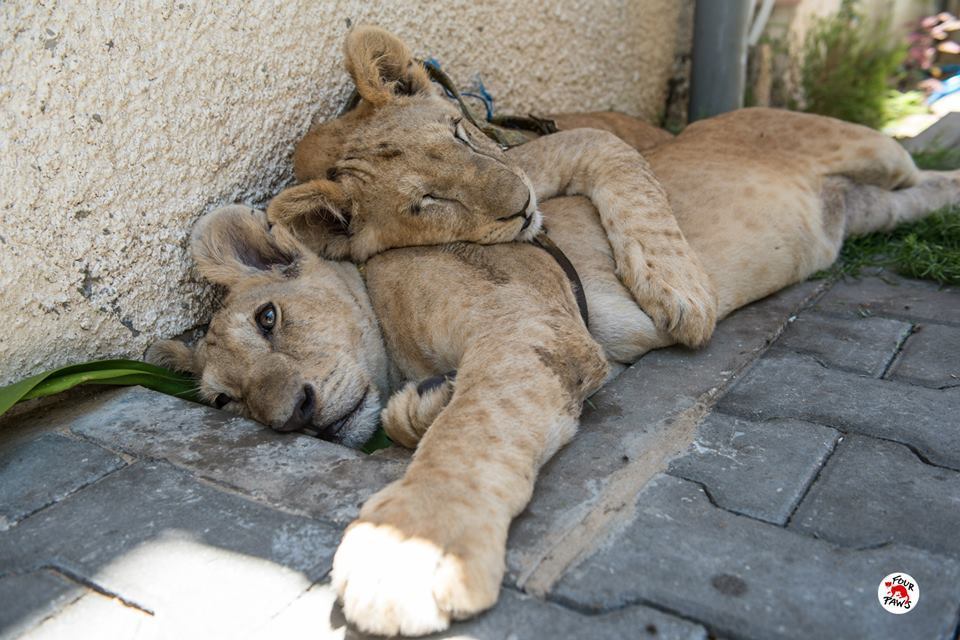 Khalil said the cubs, now 5 months old, took the whole situation in stride, cuddling together any chance they got on the journey.

"They didn't really realize the whole turmoil evolving around them," he said.

The cubs are now undergoing veterinary exams at their temporary home. Both cubs were afflicted with a skin disease, while the female cub has swelling on the back of her head that vets suspect was caused by a stroke, according to the release. LaFrance noted that the two cubs are generally in good spirits and are curious about the other lions at the sanctuary.

She added that other captive animals in Gaza continue to be in a precarious situation, as the resources to care for the animals just aren't available in the war-torn region.

"As [is] the case in the Khan Younis Zoo, where an air raid last summer destroyed a great deal of the enclosures, many animal facilities are in dire need of simple food and water supplies, medical equipment and electricity," she said.

This post has been updated with comments from Four Paws and to note the cubs are now in a Jordan wildlife sanctuary.

Clarification: The cubs were not crammed into one small crate during transport. As other photos show, they each had separate crates with enough room to move around. Photos of the cubs cuddling were taken at rest stops and after arriving at their destination. 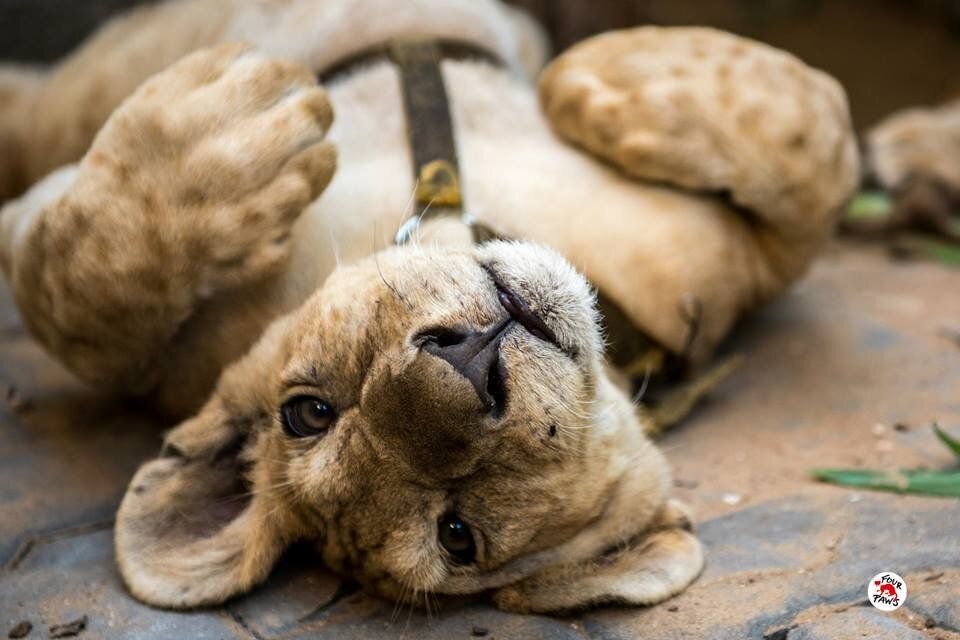