Physically and emotionally demanding. That’s how Philipp Henschel, Lion Program Survey Coordinator for the big-cat conservation organization Panthera, describes the six years he and other researchers spent combing the wilds of 17 nations looking for the elusive and rarely studied West African lion. The results of their quest were disheartening to say the least. Back in 2005, before the survey began, West African lions were believed to live in 21 different protected areas. But now a paper about the survey, published today in PLoS One, confirms that lions actually exist in just four of those sites. Worse still, the researchers estimate that the total population for West African lions is only about 400 animals, including fewer than 250 mature individuals of breeding age.

West African lions–historically referred to as the subspecies Panthera leo senegalensis, although that taxonomic designation is not currently in use–are smaller than and genetically distinct from their southern and eastern African relatives, which are also in decline and currently number about 35,000 big cats. Recent genetic tests link them more closely to the extinct Barbary lion of northern Africa and the critically endangered Asiatic lion (Panthera leo persica) in India, which also has a population of about 450 animals.

Although shocking, the news of the lions’ near extinction should probably not come as a surprise give the context of the region. The populations of other large mammal species declined an average of 85 percent in West Africa between 1970 and 2005, mostly to feed the voracious demand of the bushmeat trade. The 11 nations of West Africa are among the poorest on earth and include six of the world’s least developed countries. The countries in the region have no money for conservation, and the study found that most of the protected areas that were expected to contain lions had little to no enforcement, security patrols or management. National parks are frequently overrun by tens of thousands of domesticated cattle. Henschel describes many of the so-called protected areas as “paper parks”–conservation sites in name only.

The research team conducted in-person surveys in 13 of the 21 protected areas–each of which was larger than 500 square kilometers–and relied on field reports from scientists studying other species in the eight smaller sites. Although some of the work could be done from vehicles, that wasn’t an option in many sites. “Due to the complete lack of roads in some protected areas, we had to conduct all survey work on foot in those areas, hiking up to 600 kilometers through rough terrain during individual surveys,” Henschel says. The research was also sometimes quite dangerous. “Encounters with aggressive poachers, and, in some countries, rebel groups, were frequent.”

The human encounters also illustrated some of the dangers the lions face (the cats are often killed as pests). “In many of the protected areas we surveyed, we also conducted interviews with various groups about the potential presence of lions,” Henschel says. “One group we targeted for interviews were herders of the Fulani ethnic group, which is the largest migratory pastoralist group in Africa, and extends across all of West Africa. We often encountered Fulani herders and their cattle deep inside protected areas, and individuals interviewed almost uniformly admitted to carrying poison to kill any lions that attacked their herds.”

Even harder than the travel was the fact that the researchers rarely saw evidence of any lions. “It was devastating to realize that despite all this physical effort, despite weeks spent searching for spoor, no lion sign could be found in so many areas,” he says.

But their work was not completely in vain. They did find spoors, tracks and other evidence of lions in the four sites and ever-so-rarely laid eyes on an actual lion. Henschel says the most rewarding encounter occurred in Senegal’s Niokolo-Koba National Park. They had been searching the area for more than a month under extreme heat–”over 95 degrees Fahrenheit even at night”– when they finally spotted a big cat. “What says it all, concerning the rarity of the lion in the park, is that not one of my four survey team members, all long-serving national park service staff, had ever seen a lion in their lives. It was extremely rewarding to see how excited they all were to finally have seen the animal that is also a symbol of national pride in Senegal.”

The researchers found the most West African lions in W-Arly-Pendjari, a complex of parks that crosses the borders of Benin, Burkina Faso and Niger, which they estimate to hold about 350 big cats. The three other sites in Senegal and Nigeria are each estimated to have fewer than 50 lions. None of the sites are anywhere near each other, as you can see in the map below: 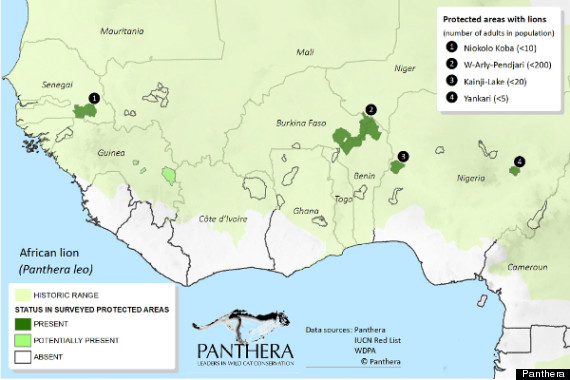 (The map also shows the sites of two possible but unconfirmed lion sites in Guinea. No lions have been seen there in more than 10 years, but the authors write in their paper that “credible reports of vocalizations suggest they may still be present.”)

In addition to their low numbers, the lions also live at a very low density of about 1 lion per 100 square kilometers. Lions in East Africa live in populations fifteen times denser. Despite this stretched out distribution, Henschel reports the good news that cubs were observed, both in person and via their spoor, meaning the cats are finding each other well enough to mate. “Lions at all four sites where the species was confirmed present are still reproducing successfully,” he says.

“Now that this massive survey effort has been concluded,” Henschel says, “we finally know where lions remain and where we need to invest our efforts to save them. This was a vital first step, but the real work of saving them is only just beginning. Even the protected areas that retain lions are understaffed and underequipped. We intend to assist lion range countries in improving management effectiveness of the areas containing lions by helping them to increase the numbers, expertise, and operating budgets of enforcement personnel in protected areas with lions.” He says that will help to “curb the killing of lion prey and illegal incursions into protected areas by pastoralists.”

Beyond that, the genetic material collected from lion droppings during the surveys will be assessed to determine the animals’ genetic diversity and health. Along those same lines, the IUCN/SSC Cat Specialist Group, which determines the conservation status of wild cats around the world, is also tackling the thorny issue of lion taxonomy, which may result in new classification for the West African lion. The IUCN currently lists the West African lion as a population, not a separate subspecies, and considers it to be endangered. “If West African lions were indeed classified as a separate subspecies by IUCN/SSC, we would recommend listing them as Critically Endangered,” Henschel says.

Panthera president Luke Hunter, who co-authored the new study, also hopes that the world will take notice of these lions, which have been ignored until now. “Lions have undergone a catastrophic collapse in West Africa,” he said in a press release. “The countries that have managed to retain them are struggling with pervasive poverty and very little funding for conservation. To save the lion–and many other critically endangered mammals including unique populations of cheetahs, African wild dogs and elephants–will require a massive commitment of resources from the international community.” Whether that aid and assistance will materialize in one of the poorest and least supported regions on earth remains to be seen.