Wildlife photographers are expected to get as close to the action as possible without putting themselves -- or the wildlife -- in danger.

As for endangering their equipment? Well, that's another matter entirely.

Just ask Ed Hetherington, a self-described "family photographer" from Atlanta who decided to take a break from snapping wedding pictures to photograph wildlife in Zimbabwe instead.

Using a remote control and a small stand, Hetherington set up one of his cameras alongside a dead buffalo, then waited for a lioness he'd seen nearby to return for her meal.

"My intent was for this to be a less intrusive way of photographing the lion (vs. us being nearby with the vehicle)," he explained in an email to The Huffington Post. "[Our guide] felt that the lion wouldn't pay attention to the camera..."

His guide couldn't have been more wrong.

The lioness stole his camera and turned it into a very expensive chew toy. Thankfully he had another camera, which he used to capture the theft from afar.

Hetherington may have gotten some great photos before the camera was destroyed, but, he notes, "for the sake of the lions, I would never do this again."

A similar incident happened just last year when a female lion at Tswalu Kalahari Game Reserve in South Africa sneaked up and stole a video camera. The camera revealed incredible footage after a painstaking search to recover it.

Both incidents may have ended well, but on a more serious note, the lion is listed as a vulnerable species. Officials estimate global lion populations have decreased by 30 percent in the last two decades alone, according to the IUCN Red List of Threatened Species.

PHOTOS of the lioness stealing his camera: 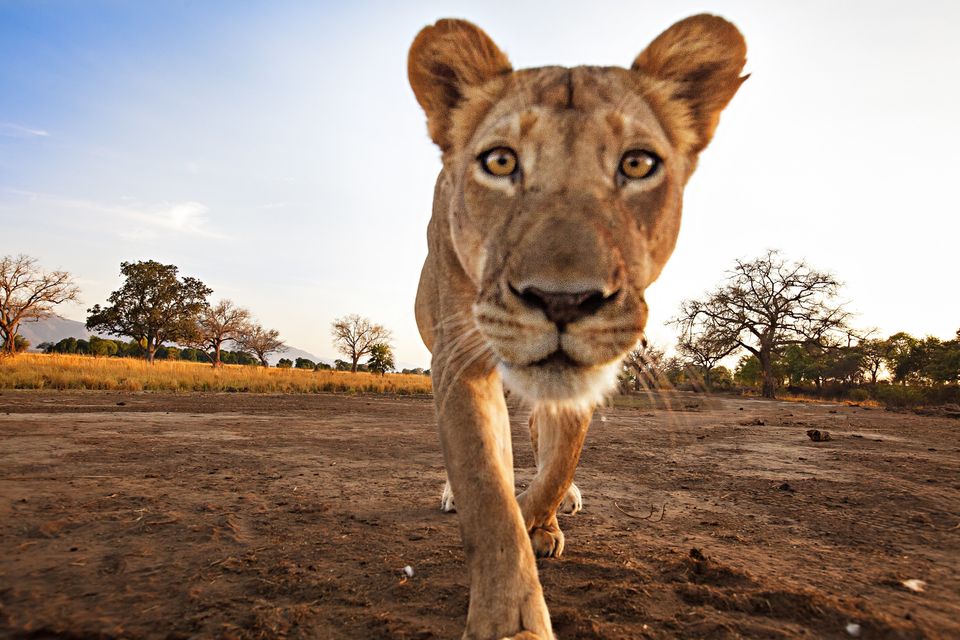 1 / 5
Lioness Chooses Camera Over Food
These images captured by photographer Ed Hetherington show a lioness making a nice meal out of his remote camera he set up while photographing in Zimbabwe. The Canon EOS 5D Mark II camera did not survive the playtime session. See more at <a href="https://www.facebook.com/media/set/?set=a.10152269804305542.929748.117291240541&type=1">Ed Hetherington's Facebook page.</a>
Ed Hetherington