Saroo Brierley, a five-year old boy from a small town in India, got lost on a train ride, wound up at the massive Howrah Junction railway station in Calcutta and became an orphaned street kid. An Australian couple adopted him, but years later at age 25, his yearning for his birth family took him on a journey back to India. His story became the #1 international best seller A Long Way From Home, which is the basis of this extraordinary and very emotional film. 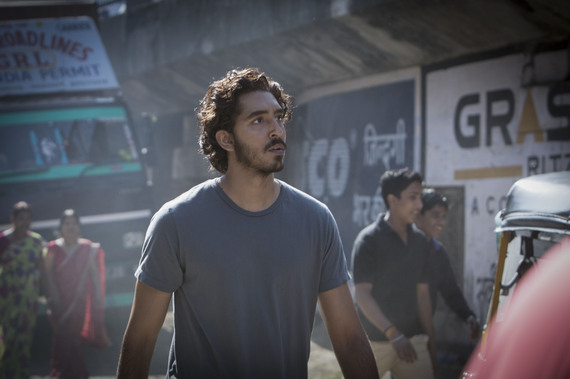 (Photo courtesy of The Weinstein Company)
Dev Patel stars in the drama Lion.

This tale almost sells itself. Once the footage rolls of a five-year-old kid, Saroo (Sunny Pawar), roaming the streets of Calcutta, 930 miles away from home, you're hooked. So tiny, so courageous, how can anyone not love him? Watching him evade the police, pedophiles and other dangers, will make your heart go out to him and it won't come back until the end of the movie.

Saroo's isolation in a busy city is intensified because the locals speak Bengali and the little boy only knows Hindi. By the time he is adopted from an orphanage in Tasmania, you're ready for him to experience good fortune. That starts when he meets his adopted Australian parents Sue (Nicole Kidman) and John Brierley (David Wenham).

Most of Saroo's childhood in Melbourne is far better than his life as a vagabond. The one area of friction surrounds his fellow adopted Indian brother Mantosh (Divian Ladwa), who has severe emotional/psychological problems and a negative energy that wears on his parents unmercifully.

Life looks up when the twentysomething Saroo (Dev Patel, Slumdog Millionaire) finds a girlfriend, Lucy (Rooney Mara). They seem happy together, but something bothers him. He yearns to find the brother and mother who once loved him. But he can't remember the name of his hometown (Khandwa) correctly. Enter Google maps. Where there's a will there's a high-tech way.

The premise is enough to make any viewer run through a box of Kleenex. Garth Davis' sensitive direction makes you feel for the orphan the entire movie. Davis is particularly successful with the earlier chapters, making the streets look perilous, adults suspicious and the future exceedingly grim.

Luke Davies' screenplay fleshes out the book with vivid characterizations and memorable dialogue that conveys insight in surprising ways. One of the best scenes is when Saroo confronts Sue about why she adopted children. He assumes she was barren, instead she tells him that John and she made a conscious decision to find children who could use their help and not have kids of their own.

The pacing in Act II, when Saroo is older, lags. This is when you might get restless and contemplate the film's 120-minute length with some trepidation. Also, though on paper Lucy and Saroo are madly in love, something about Rooney Mara's cool performance and Patel's distracted character makes their relationship seem hollow. As the final act kicks in, and Saroo plans his mission, the film regains its footing. Saroo: "I have to find home. They need to know I'm alive." The one hitch in these final scenes is you are never aware of how a 25-year-old with no visible means of support can afford such a journey.

Dev Patel has come a long way since Slumdog Millionaire. He played a very beguiling supporting role in the Exotic Marigold Hotel series. He was stoic as the pioneer Indian mathematician in The Man Who Knew Infinity. And now his stirring portrayal of Saroo, a young man destined to find his home, carries this bio film over the finish line.

Kidman brings a sweetness to the adopted mom role that resonates in all her scenes. It's as if she is floating on a cloud all her own. Wenham also exhibits a positive serenity that would make him "Father of the Year" in anyone's book. Divian Ladwa's interpretation of the disturbed brother adds sympathy to a part that could have been dismissed as a pure annoyance.

The entire cast in India gives the most natural performances, particularly Priyanka Bose as the incandescent mother and Abhishek Bharate as Saroo's brother who loses him on the train.

The camerawork by Greig Fraser (Zero Dark Thirty), of shanty interiors and overhead shots of India through a Google lens, will keep your visual attention. Minus the slow mid section, editor Alexandre de Franceschi (We Don't Live Here Anymore) runs a tight ship.

A strong and emotionally fulfilling interpretation of a true event that seems stranger than fiction.