It's not often in the wild that an antelope turns from prey to a member of the pride, but that's exactly what happened recently at Queen Elizabeth National Park in Uganda.

Photographer Adri De Visser captured photos of the amazing sight when a lioness befriended a baby Uganda Kob after killing its mother. In the photo series, the lioness seemingly adopts the baby antelope, nuzzling it and picking it up by the scruff of its neck.

De Visser got word of two lions feeding on a kill and went to take photos of the scene when he discovered the heartwarming moment. After feeding on the carcass of the Uganda Kob, the lioness retreated to the shade of a nearby tree to rest. Moments later, the antelope's offspring popped out from its hiding spot in the tall grass.

The two animals took some time to warm up to each other -- De Visser estimates about 45 minutes -- but the lioness eventually let down her guard and befriended the calf. When a park ranger appeared on a motorbike the lioness picked up the impala like she would her own and carried it away. Other tourists to the park reported seeing the baby Kob unharmed later, after the photos were taken, according to The Daily Mail.

This interspecies friendship may be rare, but it's not entirely unheard of. In 2002, a Kenyan lioness named Kamuniak, meaning "the blessed one," adopted at least five baby antelopes throughout the year.

While the antelope might appear to be in greater danger than the lioness in the photos, Uganda Kobs (Kobus kob thomasi) as a species are listed as "least concern" by the International Union for Conservation of Nature. Lions (Panthera leo) are currently listed as "vulnerable" due to "indiscriminate killing (primarily as a result of retaliatory or pre-emptive killing to protect life and livestock) and prey base depletion."

Check out the photos of the lioness befriending the baby antelope in the gallery below, and scroll down to see other unlikely animal friendships. 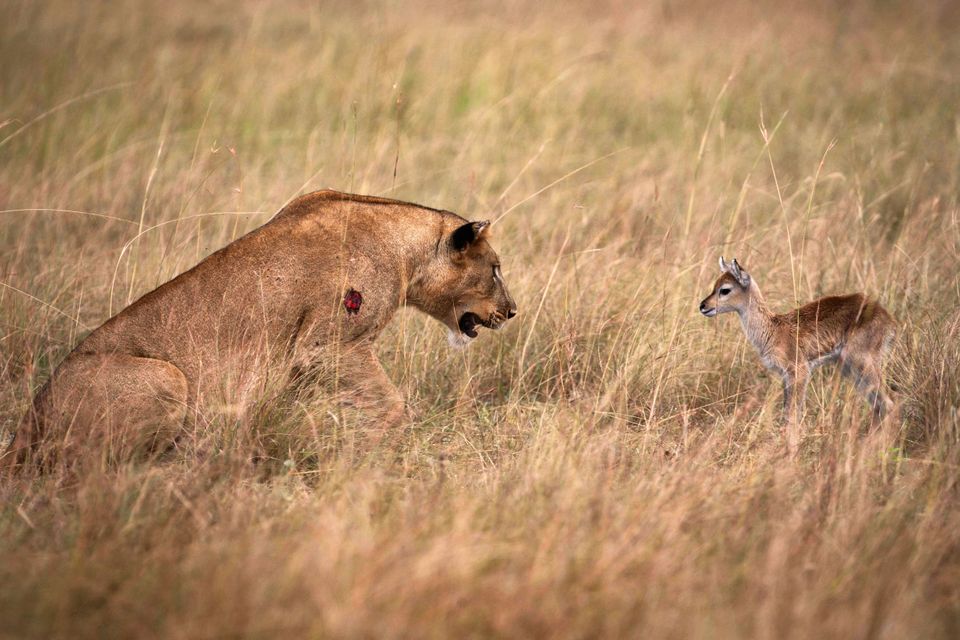