In an instant, a tense situation escalated to an attack, and one lucky wildlife photographer managed to catch a violent moment between a lioness and a crocodile.

"The sequence of six pictures of the real action were taken in one second," photog Pia Dierckx told The Daily Mail.

Dierickx, 48, was observing the lioness and her pride as they prepared to cross a riverbed in Botswana. When a threatening crocodile appeared, the lioness sprung into action and grabbed the animal by its mouth. The two engaged in a quick but fierce battle, each biting the other, until the lioness ran off relatively unscathed, save for a cut to her lip.

Dierckx reportedly told BPNS that it happened so quickly, she didn't even notice it.

"It was only when I downloaded my pictures later that I saw what had happened," said Dierickx.

This isn't the first time a lioness has been spotted protecting cubs. Last year, a mother lion was photographed rescuing her cub struggling on a slippery slope.

In another precious moment caught on film this year, a lion trainer visiting four young lions on his last day of work was overwhelmed by their outpouring of love for him.

Unfortunately, some lions are threatened by indiscriminate killing and habitat loss, according to the IUCN Red List of Threatened Species.

Check out the battle between the lioness and crocodile in the photo slideshow below: 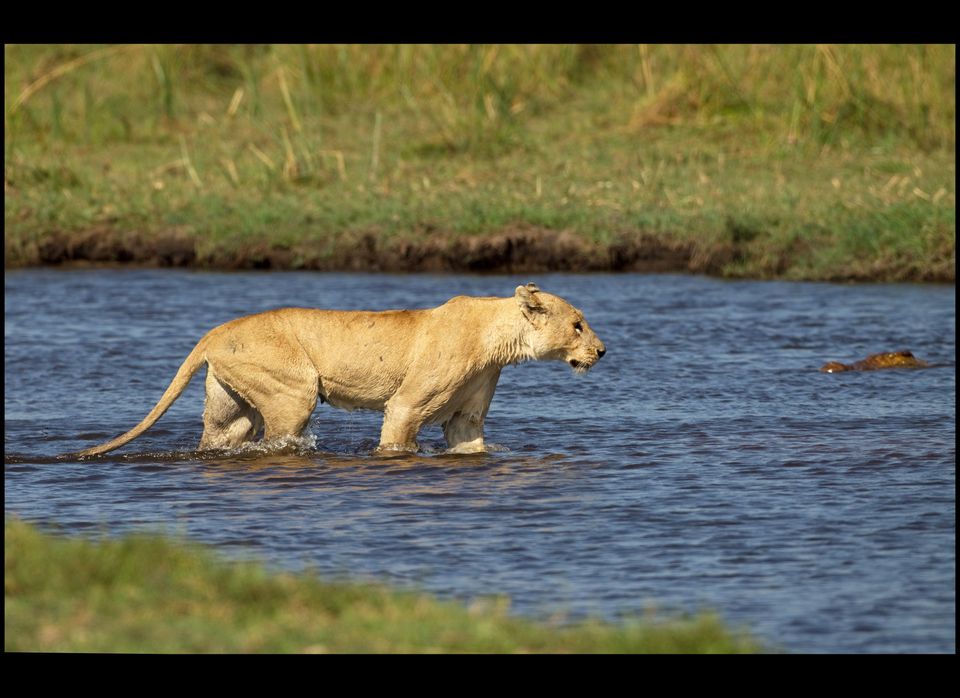 1 / 9
Lioness attacks Crocodile
A brave lioness' terryfying encounter with a giant crocodile in the Okavango Delta of Botswana has been recorded by wildlife photographer Pia Dierickx. The plucky lioness took on the lurking reptile whilst the rest of her Pride crossed the river in safety. But the brave big cat was lucky to escape with only a cut lip after the crocodile fought back. Photographer Pia said 'the whole attack was over in the blinking of an eye, and it was only when I downloaded my pictures later that I saw what had happened'
Pia Dierickx, BNPS