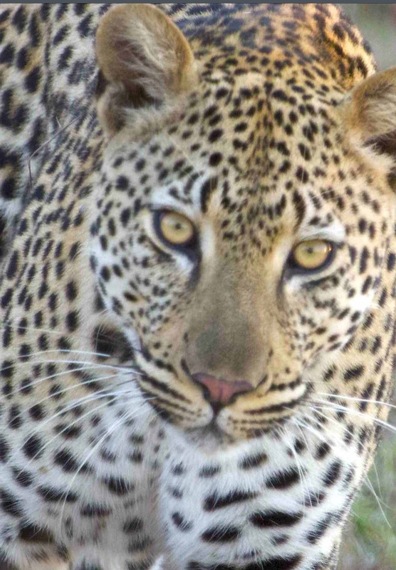 Truth be told--if you knew me at all from my Huffington Post Wedding Blog ...
http://www.huffingtonpost.com/elisabeth-laurence/carolina-the-cake-and-me-_b_7788778.html
you could understand the Louis Vuitton part. 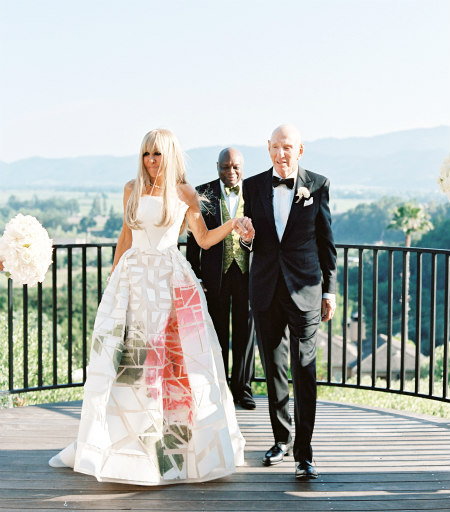 But, leopards and lions? You've got to be kidding.

Until I married my now-husband Frank--I didn't even like kittens.

So when Frank planned our two-part honeymoon--a week in Paris, then a week on a photo safari in South Africa--I blocked out Africa and concentrated on the fun part of our honeymoon--our first week in Paris.

After all, we did receive some surprising, stylish send-offs....

"Yours was the ultimate Herrera wedding," said Carolina Herrera's Public Relations Director--who shared images from my HuffPo blog with the entire Herrera team.
"You looked stunning!" Neiman Marcus's Fashion Director Ken Downing emailed.
And, when I shared wedding pics with Carolina Herrera herself at her party in New York-- 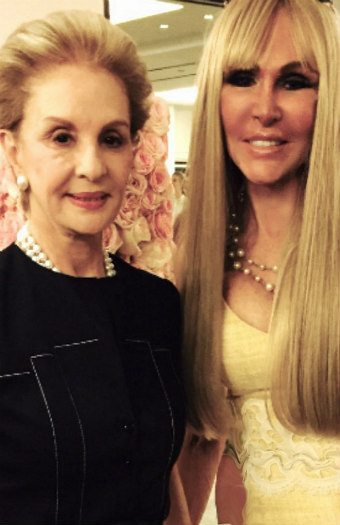 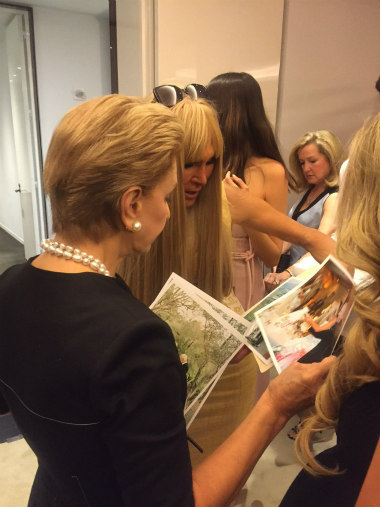 I was truly in Haute Heaven.

Let's face it, my style addiction is my croquembouche. There is never enough.

So, fashionista that I am, I was primed for Paris. 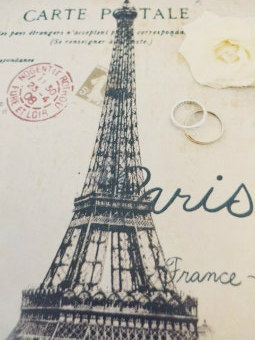 --and the French welcomed us with chaleur et d'amour.

We were upgraded to a prime suite facing the Eiffel Tower 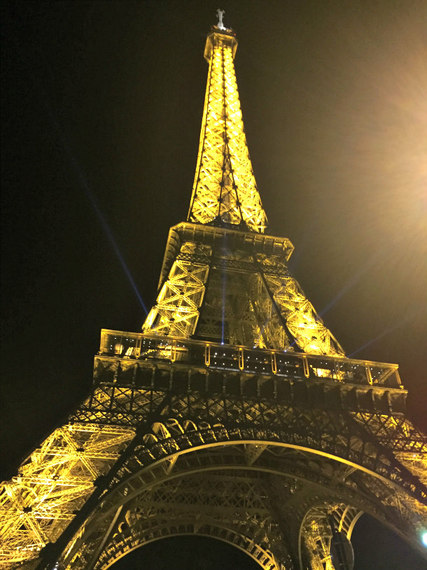 at the newly renovated--and quite moderne--Grand Hotel du Palais Royale, where, late at night, we'd sit on our balcony, marveling at the Tower's five-minute razzmatazz light show.
https://www.youtube.com/watch?v=aKCgcRnj6LU 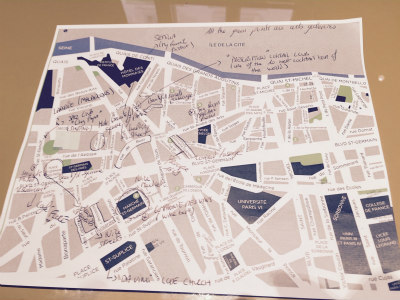 From the Louvre--almost abutting our hotel, to the Musee D'Orsay, where my dear friend, the inestimable art expert--Lucy Buchanan, widow of San Francisco Fine Arts Museum's late Director John Buchanan--arranged for a private tour and lunch for us, we reveled in museums. 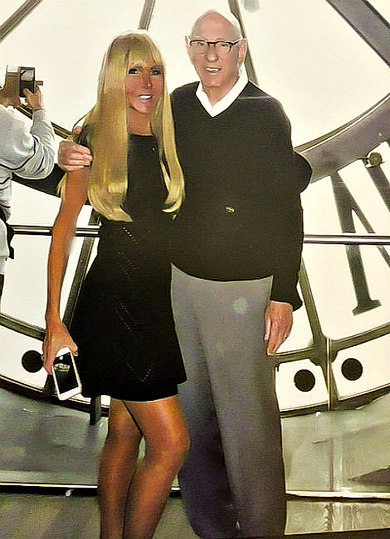 We dined on a private yacht on the Seine.... 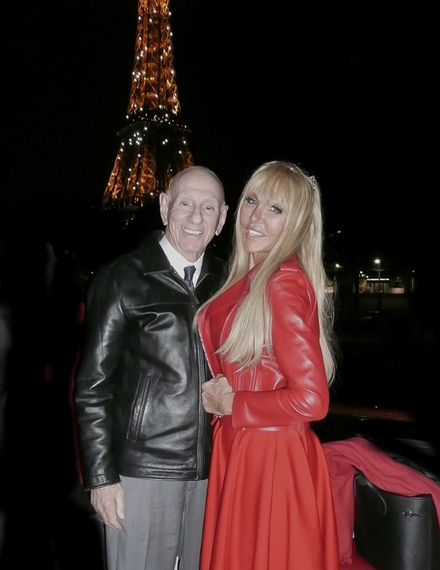 And then, Frank, bless him, braved the swarm of shoppers on the Avenue Montaigne, the Rue du Faubourg Saint-Honoré and Rue Saint-Honoré, waiting patiently while his bride tried on Chanel, Dior, Balenciaga and Hermes.

But it wasn't until we stood at 101 Avenue des Champs-Élysées that we faced our greatest Parisian fashion adventure.

Six-hundred tourists pressed against the building, ringing it like a too-tight strand of pearls, kept at bay by guards at the door of what we soon discovered was the 10th most popular destination in Paris--The flagship Louis Vuitton boutique. 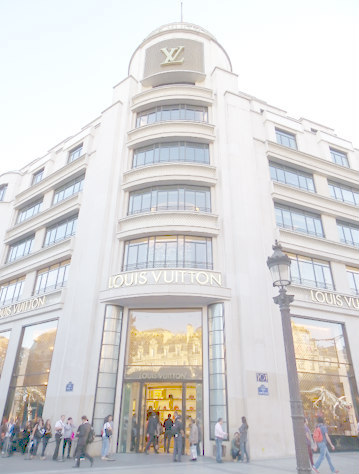 Like a fortress--beautiful but impenetrable, visitors were only allowed in by two's or three's.

But I, after ten seasons filming the mêlée of hundreds of fashion shows at New York Fashion Week for our Lives of Style broadcast TV show--am not one to wait around.

I took my new husband's hand, strode directly to the guards and said, "You should know that I am a shopper, not a tourist.And I'm ready to buy."

They let us in. 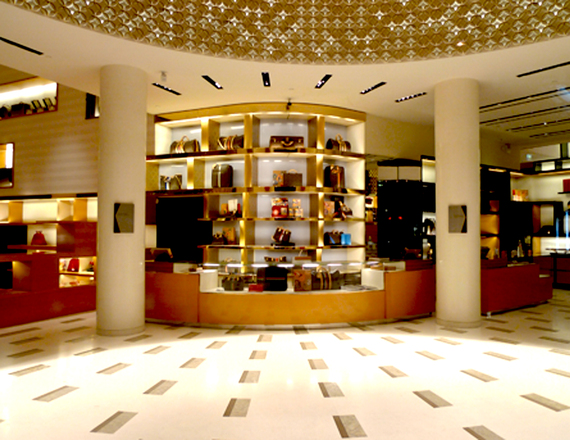 And it was there that I found Quentin--the extraordinary genius behind the store's customer experience. 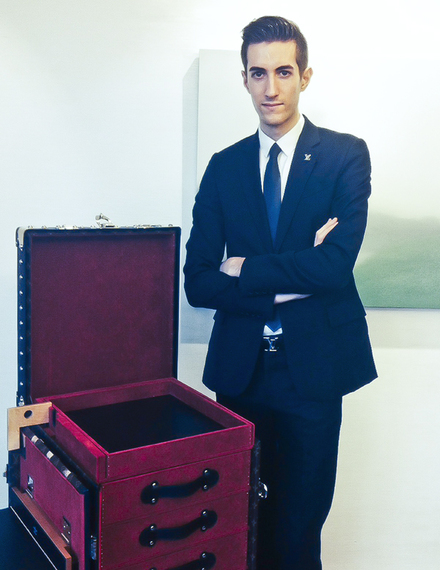 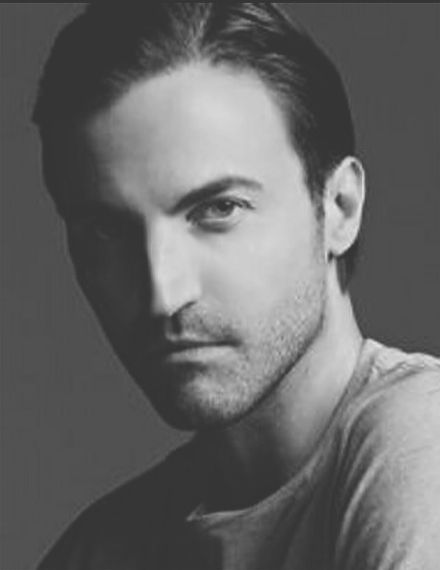 --his admixture of insouciance, innovation, energy and perfect proportion, and nabbed the earliest iterations of the brand--before they appeared in any other LV store

Quentin plied my husband with espresso and Ladurée macarons, and kept him happy and satisfied.

I was ecstatic. I literally lived at Vuitton until we left Paris.

Very reluctantly--I prepared to enter what I though would be a drab (khaki, beige and taupe? - ugh!) and altogether boring second half of my honeymoon.

I was so wrong.

We flew on Air France from Paris to Johannesburg, taking a midnight flight, arriving in mid-morning. (It's a long, long flight). 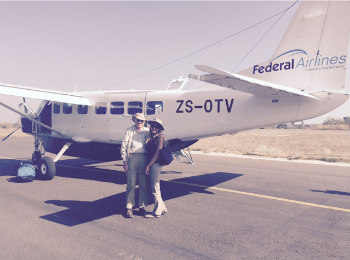 I stared down at the contours of the plane casting a shadow upon the brown earth, rife with low trees and vegetation. 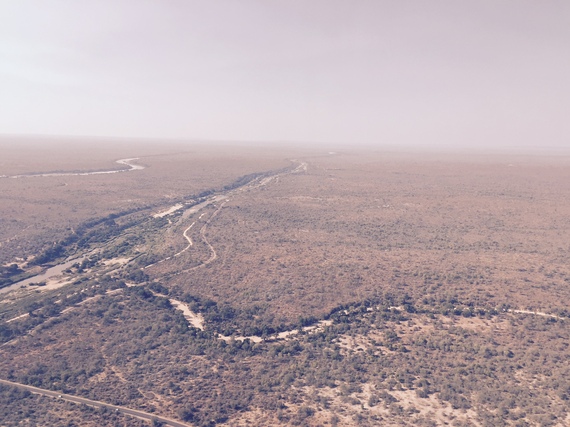 It reminded me of Texas, which, strangely, brought me solace.

We landed at Skukuza and suddenly, the baking sun, smell and scene of Africa struck me.

Our guide--Jabalani picked us up and drove us to our first resort--Narina, where, two minutes from the airport we came upon an elephant in the bush--the first I ever spied outside of a zoo. I pulled out the closest thing to me...my I-Phone6, and just started shooting. 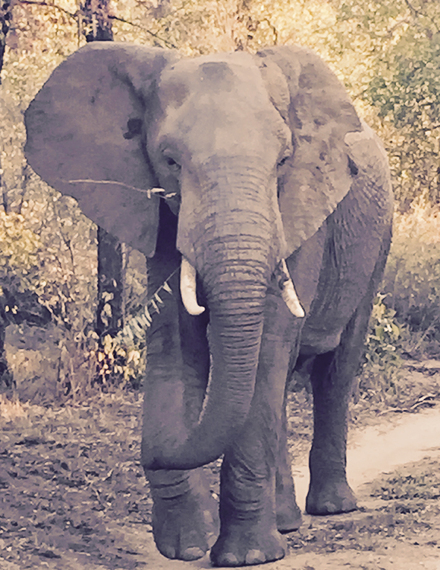 By 3:30p that day we were set to go out on our first drive to see the animals.

It was, I reasoned, like a duty date. Close my eyes and just get through it.

So I donned the dull clothes, with a hat 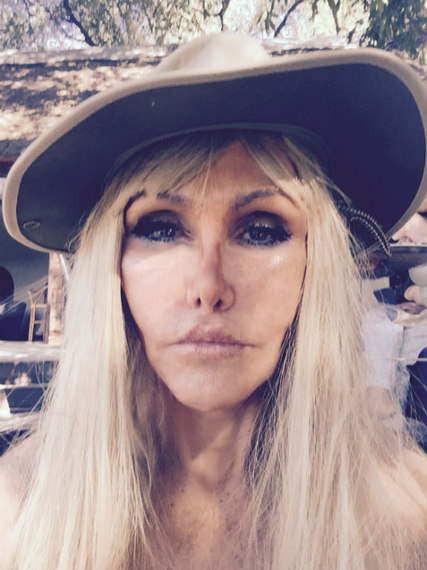 and set off with the others on the open-tri-seated level Land Rover.

I was squinting at the sun--prepared to weather out the drive, when it happened.

Honeymoon--the leopard, came into my life.

He was ambling down a dirt road--seemingly without a care--full-grown, in his prime, a sinewy, muscled killing machine. 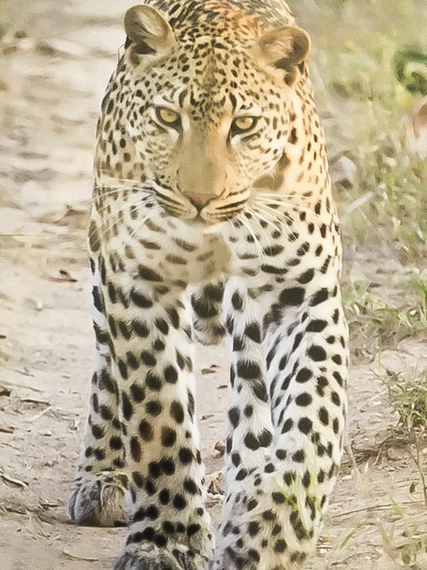 And he was walking directly toward our vehicle--more specifically, on my side of the vehicle.

He was thirty feet away, then twenty, then ten, then five.

I was frozen, afraid to breathe. I couldn't move. He was passing the vehicle--a foot away.

Then he looked up at me. 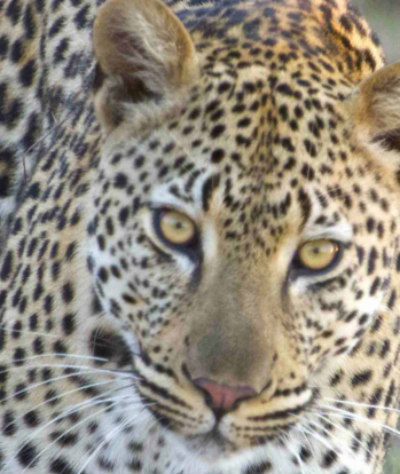 Okay, this is the moment--I thought briefly--he'll attack and I'll be history. My nerves were raw, but then I looked back at him.

And I saw--the spirit of the animal--the alertness, aliveness. He kept me in sight as he passed me--so close that I could have reached out and touched him. Then I started to cry.

My husband said I would be forever changed. I would never look at animals the same way again.

And he was right.

At every safari lodge--at Narina, in Lion Sands 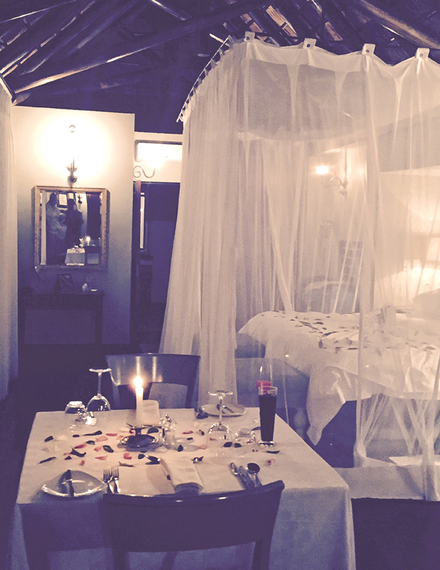 --and then, after we flew to another resort--the elegant and sophisticated Singita Boulders--in Sabi Sands, 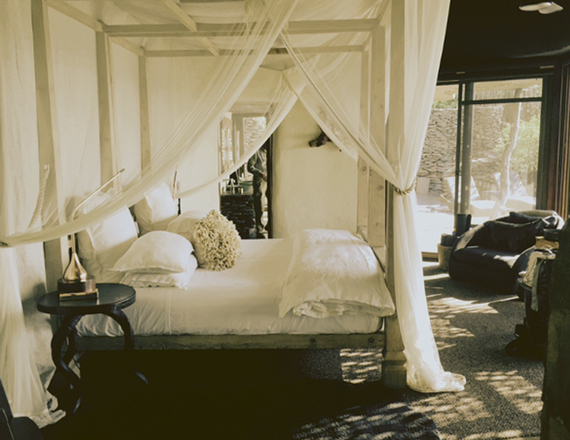 where we were wined, dined and fêted, luxuriating in our own, detached, private luxury suite with floor-to-ceiling windows and a plunge pool... 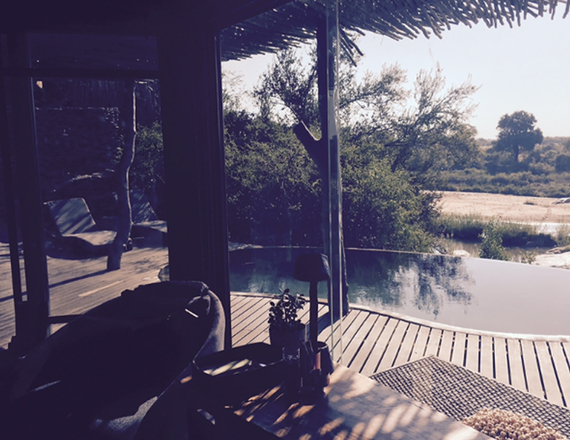 I relished the drives more than anything.

We were yards away from giraffes, 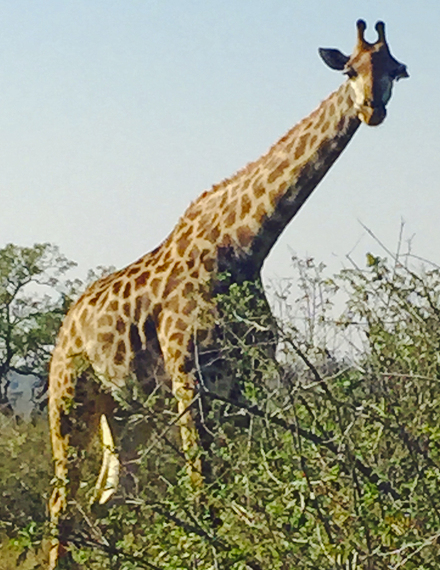 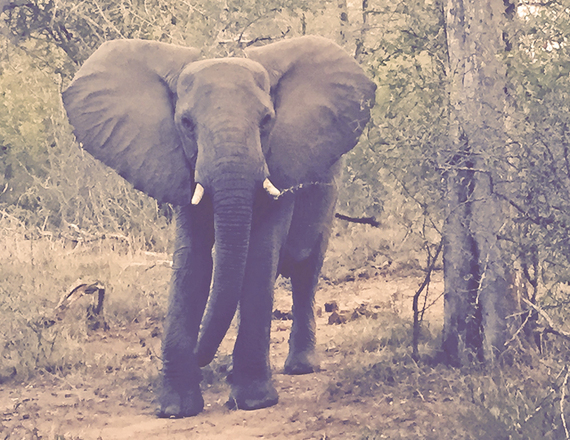 I shot video of a mother leopard and her baby-- 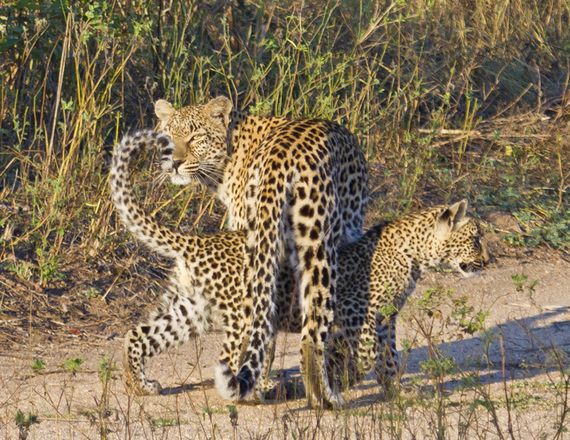 Frank said they were attracted to my blonde hair. 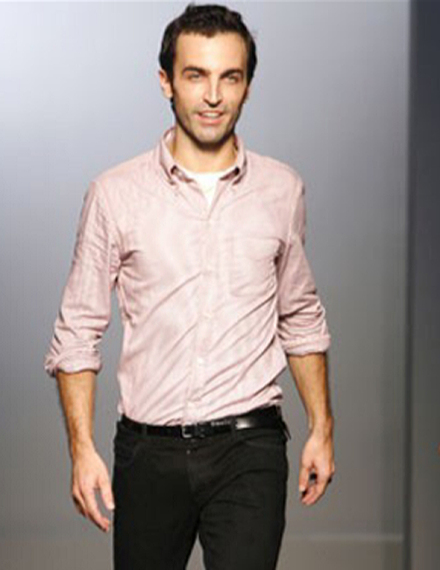 and the energy he brought to Louis Vuitton was replicated in the energy of the beautiful animals of Africa.

When it came time to go--I didn't want to leave.

We met an Afrikaner at the airport, waiting to board a Delta flight from Johannesburg to Atlanta.

"Come visit again," he said, "You can have dinner at our house."

We agreed that we would--soon.

And as for Nicolas--I saw him and his stellar Spring/Summer 2016 runway show in Paris on 7 October. 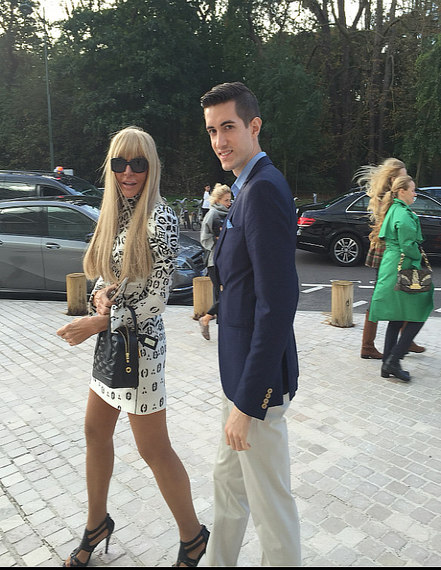 where I chatted with Harper's Bazaar's Editor-in-Chief Glenda Bailey 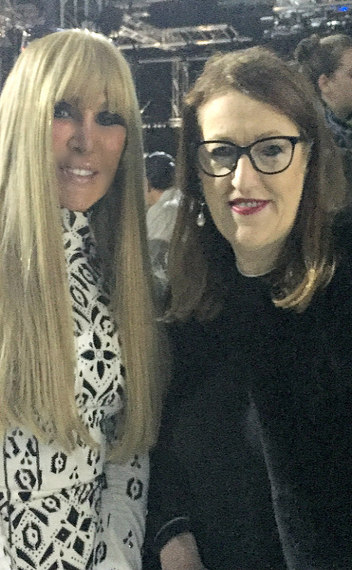 And Frank and I, who recently lost Singa, our beautiful Savannah cat--a cross-breed from the African Serval, got a new Savannah--her name is Nicola 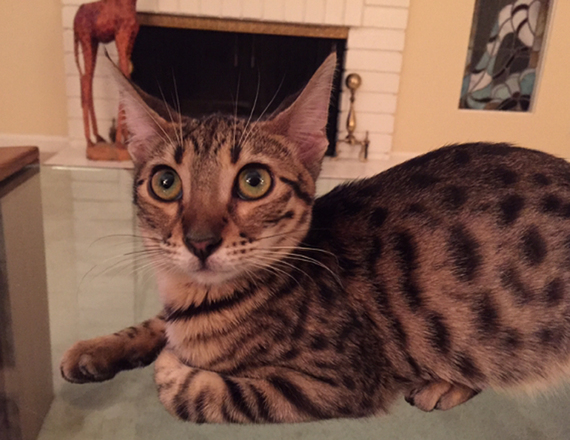 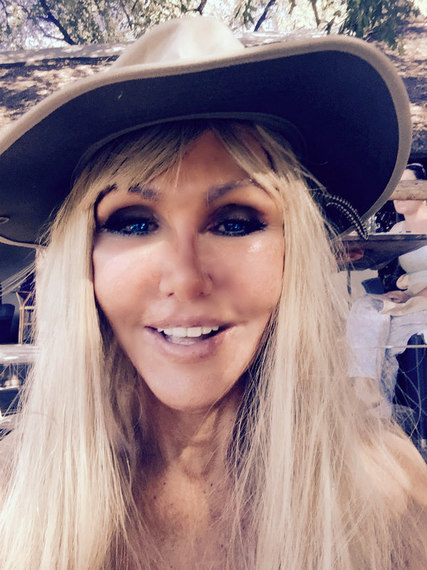