Mars has water on its surface, and it's in liquid form at least some of the time.

NASA on Monday announced the results of a new study showing that salty liquid water flows seasonally on Mars, giving the red planet one of the essential ingredients for life.

The RSL are typically about 15 feet in width or smaller, and appear on slopes during the planet's warm seasons. They fade during cooler seasons, then reappear the following year as the planet gets warmer again.

While NASA has suspected that the RSL are made of salty brine, previous analyses of data from the spacecraft's Compact Reconnaissance Imaging Spectrometer have found neither salt nor water.

The new study, however, is far more detailed.

PHOTO GALLERY
Is there recent flowing water on Mars?

Researchers led by Lujendra Ojha of the School of Earth and Atmospheric Sciences at the Georgia Institute of Technology have found evidence for hydrated salts, likely magnesium perchlorate, magnesium chlorate and sodium perchlorate, according to the study.

Those compounds also lower the freezing point of water, allowing it to flow at much cooler temperatures.

"These soggy streaks suggest that there are vast reserves of underground water, presumably the last remains of lakes that may have once dotted the landscapes of this planet," said Seth Shostak, senior astronomer and director of the Center for SETI Research, who was not involved in the new study.

"Consequently, if life began billions of years ago during Mars' more clement youth, its progeny could still be hiding out a few feet underfoot," he said. "That would make the task of finding some red planet biology far easier."

The researchers write in Nature Geoscience that there is still another mystery to be solved: where the salty brine is coming from. They aren't sure whether the water is flowing from a local aquifer, melting ice or another source. There could be several reasons that the RSL lines are forming, researchers write.

It's already known that there is water in ice form at Mars' poles, as well as water bound to minerals beneath the surface of the planet. NASA also believes Mars was home to a massive ocean some 4.3 billion years ago.

The new study, however, offers the first reliable evidence of liquid water on the surface today -- although the researchers add that the amount of water in the brines "may be too low to support known terrestrial life."

Even so, the idea that surface water exists in any form at all would mean that Mars has one of the essential ingredients for life.

Now, future studies can focus on trying to find out if it's there.

"To find out whether life has originated on Mars independently of the origin of life on Earth will take a sophisticated robotic mission or a manned mission, either of them carrying the right instruments," said astronomer Jay Pasachoff of Williams College. "Of course, that would be microscopic life."

Shostak said even microscopic life would have profound implications.

"It would convert the idea that life is a cosmic commonplace from 'a pleasant hypothesis' to 'a very plausible statement,'" he said.

Liquid Water Found On Mars
Is there recent flowing water on Mars? 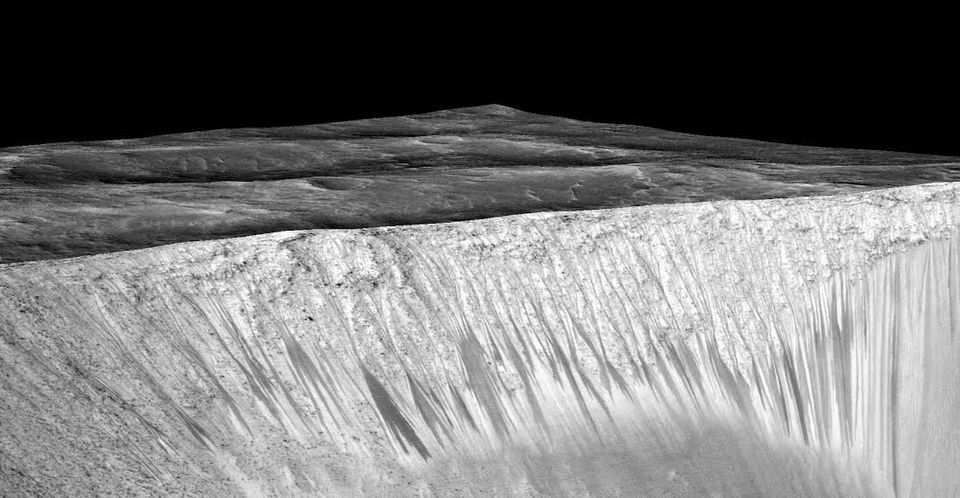