The drought in California is now in its fourth year and the worst on record. All Americans should be concerned, because California produces nearly half of U.S.-grown fruits, vegetables, and nuts. Furthermore, 40 states in the U.S. are expected to experience water shortages within the coming decade. The crisis in California serves as an example of common agricultural policies and practices that damage our water supplies.

The threat of water shortages will increase as climate change progresses, for example, by shrinking snowpack. Snowpack is vital to ecosystems and more than half of the world's population. Snowpack provides about a third of California's water supply when it melts in late spring and summer and replenishes reservoirs. California's snowpack is at its lowest level on record. 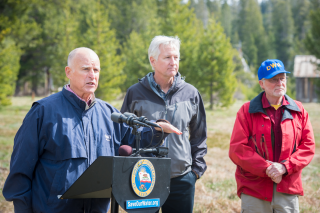 Governor Jerry Brown: "I can tell you from California that climate change is not a hoax. We're dealing with it, and it's damned serious."

As elsewhere, California water use is inefficient in many respects. Underground pipes in water distribution systems in the state lose enough water to supply the entire city of Los Angeles. Water is too cheap, and some pricing policies discourage conservation. For example, half the homes in Sacramento lack water meters (to measure water use), and residents pay a flat fee no matter how much they use. Other water utilities perversely provide a volume discount, charging lower rates for consuming more. Increased clear-cutting of forests -- which play a vital role in water supply -- exacerbates water shortages.

While agriculture accounts for only 2 percent of California's economy, as much as 80 percent of California's water for human use goes to agriculture. Surface water is allocated according to a system of senior and junior water rights based on "first come, first served" and "use it or lose it" principles. The first farm that drew water can take what it needs forever, while farms arriving later must stand in line. Farms risk forfeiting part of their water allotments if they use less than allotted. On the other hand, there are no restrictions on tapping groundwater.

In their defense, California farmers have improved irrigation efficiency in the past several decades, spending billions on improvements and increasing crop production per unit of water by 43 percent over the last 40 years. As of 2010, low-volume methods such as drip irrigation were used on 38 percent of California farmland, and California leads the U.S. in the use of low-volume methods. Drip irrigation delivers water directly to the roots of the plants, with almost no evaporation or surface runoff. However, gravity irrigation was still used on 43 percent of farmland. Gravity irrigation involves moving water across farm fields, either in broad sheets or via a grid of ditches. As much as half of gravity irrigation water does not reach the crops. Sprinklers, which lose water to evaporation, were used to irrigate 15 percent of farmland.

The California drought is devastating vegetation and wildlife, and people throughout the state have been forced to make do with less water. On April 1, Governor Jerry Brown imposed the first statewide mandatory restrictions on water use in California history, ordering Californians to reduce urban water use by 25 percent compared with 2013 levels. Lawn watering is the primary target.

The mandatory water use restrictions do not include agriculture -- for now. Agricultural users have already suffered cutbacks in surface water allotments, and as a result 400,000 acres of agricultural land were left fallow last year, at a loss of $1.5 billion. Even more land will be pulled out of production this summer.

In addition to leaving fields fallow, farmers are also drilling more wells, since groundwater is up for grabs. Water table elevations in some locations have dropped 200 feet in the last few years. Many farmers have continued to produce lucrative water-intensive crops -- such as nuts -- or have even expanded production. However, production of other less lucrative water-intensive crops, such as rice and corn, has decreased.

Governor Brown mandated that irrigation districts develop drought-management plans and directed the State Water Resource Control Board to accelerate efforts to curtail wasteful water practices in agricultural fields. Governor Brown also signed what may be the most significant legislative water initiative in California in 50 years, the Sustainable Groundwater Management Act of 2014. The Act requires the development and implementation of plans to achieve groundwater sustainability by 2040. Unfortunately, scientists aren't sure groundwater supplies will last that long.

By depleting aquifers, we remove our reserves for future droughts. Building back reserves requires reducing withdrawals enough to give aquifers a chance to replenish. While shallow aquifers can replenish relatively quickly, deep aquifers in California can take hundreds of years to replenish. The deeper wells being drilled now are accessing older groundwater.

Aquifer depletion also causes land to subside -- as much as a foot per year in some locations in California -- causing damage to structures, surface water conveyance, utilities, and transportation infrastructure. Aquifer depletion dries up nearby shallower farm and residential wells; robs nearby surface water bodies of their water, hurting vegetation and wildlife; and causes conflicts among people.

We also need to protect groundwater quality so water can be used without requiring expensive treatment to remove contaminants. Synthetic fertilizers and pesticides used in industrial agriculture and hydraulic fracturing wastes generated in natural gas production degrade water quality. Governor Brown did not include the oil industry, with its 84,000 hydraulic fracturing wells throughout California, in the new water use restrictions. Although thousands of such wells were recently found to be in violation of the Safe Drinking Water Act by illegally injecting toxic fluids into aquifers, Governor Brown ordered only twelve of them to be shut down.

Worldwide Race to the Bottom

The problem of groundwater depletion is not limited to California. Humans are rapidly depleting one third of Earth's largest aquifers, and scientists do not have good estimates of how much water remains in them. The most "overstressed" aquifers in the world are in the Middle East, northwestern India and Pakistan, and northern Africa. California's Central Valley is slightly better off but is still classified as "highly stressed."

California is not the only region of the U.S. depleting its groundwater. For example, the High Plains aquifer -- underlying parts of eight states -- is intensively used for irrigation; water levels have fallen more than 100 feet in some areas.

A United Nations report states that the only way we will be able to feed the world is with organic farming. Organic farming uses less water than industrial farming by enhancing soil's water-holding capacity and reducing surface water runoff. Organic farming prevents groundwater contamination by synthetic fertilizers and pesticides, prevents soil erosion, protects pollinators and other wildlife, and improves consumer and farm worker health. California is a leader in organic agriculture.

Agriculture is the fourth largest source of global greenhouse gas emissions. Because organic farming emits less carbon dioxide than industrial agriculture, it could help prevent water shortages from occurring in the first place. A United Nations report states that agriculture could become carbon neutral in two decades by moving to organic practices worldwide. In 2012, U.S. organic food sales were less than 5 percent of total at-home food sales. With organic agriculture producing more profits per acre than industrial agriculture, and steadily increasing demand for organic food, hopefully this percentage will increase.

Of all the world's freshwater removed from its sources worldwide, almost 60 percent is used to irrigate crops. Agriculture is the second largest water user in the U.S., after thermoelectric power plants and before public supply. Agriculture should top the priority list for water use reduction. Organic growing practices, low-volume irrigation, and less growing of water-intensive crops in deserts would reduce water use while producing an abundance of environmental benefits.

Ellen Moyer, Ph.D., P.E., is an independent consultant helping clients protect natural resources and prevent and remediate environmental contamination. You can connect with her on LinkedIn and Facebook or find more information on her website.