"The misery and grandeur of man, caught between the abysses of the infinite and nothing." - Blaise Pascal

"I think, therefore I am." - Rene Descartes

Because a bird doesn't possess a human's higher intelligence, it doesn't brood over its self-consciousness, its ephemeral existence, and that messy (social, political, economic, and ecological) world it calls its roost. We do and, as a result, we do. In Consilience: The Unity of Knowledge, Edward O. Wilson suggests that this higher intelligence drove us from Paradise. Lisa Adams's trove of work suggests a post lapsarian, so-what way to make the best of it. 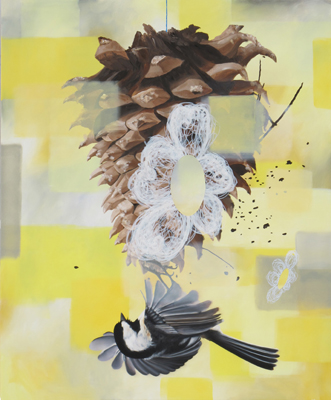 She populates her pictorial aviary with birds. On a sunny day, these birds serenade us (pictorially, if not audibly). On occasion they face peril, if not great inconvenience: wind spouts, branchless trees, and imprisonment in geometrically structured environments that resemble Versailles tended to by Le Corbusier and the Marquis de Sade. Often they rest upon their perch, alert but nonplussed, and watch (not digest or process) with simple presence the day unfold. Their nonjudgmental bird's-eye view offers us a vantage point from which we, unlike our avian heroine, can note the unpleasantness (bird crap, tornado-roused perches, extinction) of the world around us. To the bird these prospects register zilch. To us, hardwired to make sense of everything, they offer us the consolation of a spirituality of imperfection. 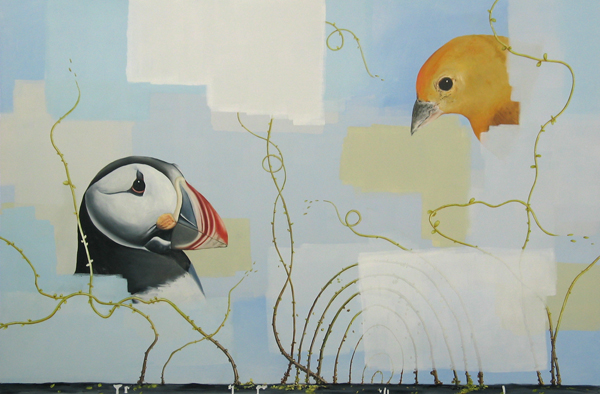 "A Mechanism of Harbingers"

In each piece, time is compressed and simultaneous, space is planar and archaeological. Both suggest timelessness and complexity of experience that spans the stars hung aloft in the night sky to the "I Heart You" graffiti carved into a tree. Brimming with the density of evermore, each piece limns the predicament of acknowledgment of perishable flesh and bones in a galaxy measured by light years. 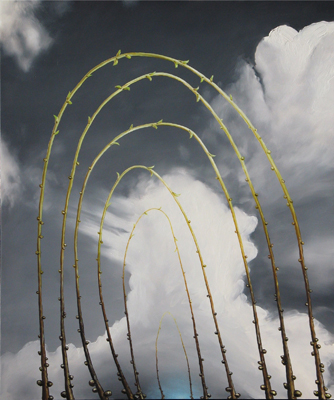 "A Cause For Wandering"

In some work, boundless space dominates. These straightjacket compositions are static, rectilinear, and constrained, the forms, abstract and perfect. They include ovals that can be birdbaths, eggs, or cameos that circumscribe portraits of birds; and circles that can be suns, stars, or flowers. The universe seems Newtonian and predictable, unending and immense. In other work, organic forms rule. These compositions are loose and lyrical, the shapes, fluid. Tall grass yield to a breeze; sinewy vines describe jump ropes and garlands, and stylized fleurs-de-lis that lean Zen-like toward the sun. Each moment feels spontaneous and fleeting. 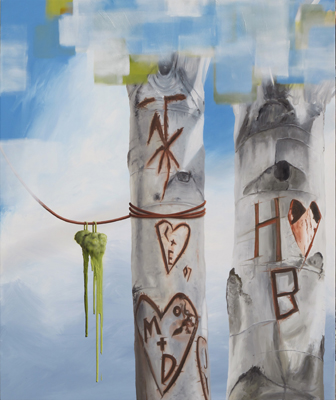 From piece to piece, the unchanging geometric space and the disintegrating organic form construct a Platonic narrative that describes a degeneration of perfect form into something, well, all too human. From Plato's degeneration from ideal forms comes Adams's regeneration to a more mindful mode of existence. Addressing our daily struggles with self-actualization, her work takes our finiteness as a given. It diagnoses and then offers a solution to an existence of never-quite-enough. Viewed as a stage set of the human spectacle, Adams's work casts ephemeral, and imperfect actors on an unchanging, and perfect set. At center stage, in the eye of the storm, she exquisitely poises a dynamic tension that offers a momentary, philosophical repose, which is nothing more than the point of view of her birds. 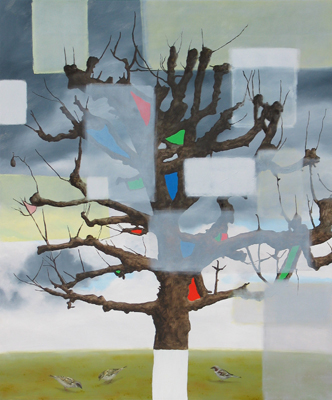 Things flourish, things degenerate; and it's this degeneration where we find her simple message: yes, we're imperfect; yes we've devolved from idyllic, Edenic, idealized form. So what? Prescient and sagacious, Adams takes these Vicissitudes of Circumstance, this bird crap, and recycles it into mulch against the forces beyond our control. The work does not wax nostalgic for some prior, idyllic, prelapsarian climate but rather accepts imperfection as a given of the human condition. She refracts it through a bird's point of view, bird, sitting on a perch in nonjudgmental and philosophical repose. 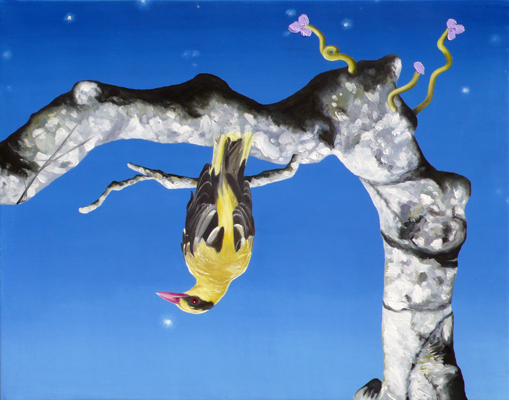 With images that portray skirmishes between sense-making Man and her incomprehensible and infinite environment, Adams's spirituality of imperfection addresses the incontrovertible fact that nothing endures. That attempts to control nature, comprehend the expanse of time, and come to grips with oneself are fruitless. It suggests that, with a reorientation of outlook, as refereed by a bird, there is tranquility in chaos. Her work proposes a middle ground that acknowledges, indeed, validates imperfection as our norm, suggests acceptance as our recourse. The path may be disjointed, fractured, and harrowing but, as the work shows with gentle persistence, that is precisely the point. Adams's work makes us aware of the middle ground that this disinterested perch represents. 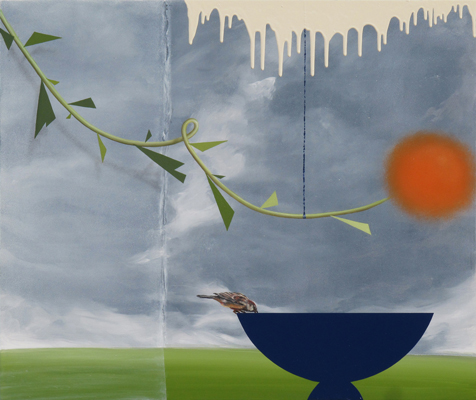 With economical (and, by now, expected) magniloquence, Adams shows how art not only extracts meaning from the chaos of daily life but also engenders a thirst for if not appreciation of the spirit of perfection, which, here, is nothing more than awareness of the gap between our mortal span and the timelessness of stars. The result is a philosophy of accommodation, of awareness of and then reaction to the vagaries of Life. It's a flexible scheme, seamless and effortless. Eternity, her work says, is one thing, we are another; but, in a wonderful crescendo of enlightenment, it concludes that we are timeless because we embody change itself, if we but accept our place in this imperfect, flawed, and, yes, crapped upon world. 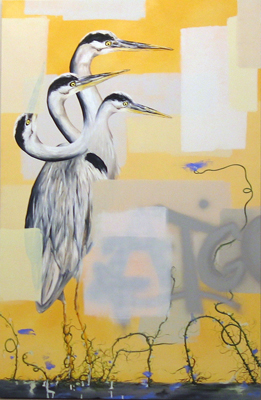 "The Probability of Imminent Events"

This essay will accompany the Fall 2011 release of LISA ADAMS:
VICISSITUDE OF CIRCUMSTANCE by Zero + Publishing, Inc. (www.zeropluspublishing.com)