When thinking of bike-centric cities, Los Angeles isn't the first to come to mind. If you're intrigued, however, by the experience of pedaling through the stretched out city's traffic-laden streets without risking your life in the process, admiring the artwork of Lisa Anne Auerbach is a notable alternative.

Auerbach's artwork combines political awareness with an unpretentious curiosity that allows meaning to cultivate slowly, sprouting up in unlikely spaces. If you know her work, you're most likely familiar with her charged knitwear, which transform the haphazard act of sticking a bumper sticker onto your vehicle into a laborious, handmade endeavor. 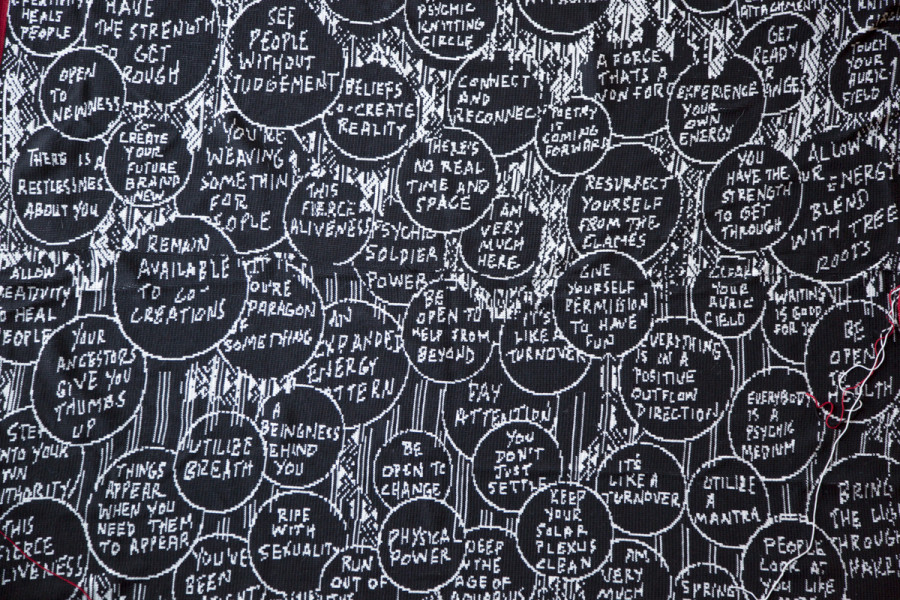 "The sweaters I started knitting when I was on a bike to show my allegiance to things," Auerbach explained to The Huffington Post Arts. "They worked like bumpers stickers. The knitting stemmed from this idea of passing out language in a car-centric city, where the place that messages are mostly spewed is through the automobile. The sweaters were, at the beginning, influenced by bicycling in LA." Auerbach's political knitwear buzzed online around the time of the 2012 presidential election, touting slogans from 1812's "War Party" to 2012's "Jewish Grandmas for Obama."

In her upcoming exhibition at Gavlak Gallery, Auerbach veers away from the flagrantly political in her knitted works, creating instead tapestries of psychic predictions and flattened bookshelves. Each of Auerbach's artistic projects feels like a new pocket of Los Angeles, discovered through and vaguely connected to a previous locale, yet still its own entity.

"I had been photographing these small, free-standing businesses for many years," Auerbach explained. "When I was photographing those, I was thinking about an individual space in the architecture of the city. Having a small business is a very American idea. It's the individual in the world, making your way, making a statement, being yourself -- in an architectural context. At the same time I was doing this project, I started hearing a lot about Megachurches."

A Megachurch, for the uninitiated, is a (most likely) Protestant church with at least 2,000 people in weekly attendance. The spaces themselves, which are scattered heavily around Southern California and other parts of the states, resemble monster malls more than religious sanctuaries.

"Around 2008 in the electoral cycle there was a lot of language around individualism and commerce and being yourself," Auerbach said, "but then there were also a lot of ideas floating around about faith and family and God and being together and being unified. I felt like these two architectural elements of the American landscape were really, for me, indicative of the political language and ideas that were really floating around. It felt super American to me."

Auerbach began photographing both the Megachurches and small businesses as architectural wonders, as well as symbols for the competing American ideals of the time. Instead of hanging up her compendium of Megachurches as framed photographs, she opted for a Megazine, a super-sized zine composed of Megachurch photos and a diaristic account of Auerbach's visits there. 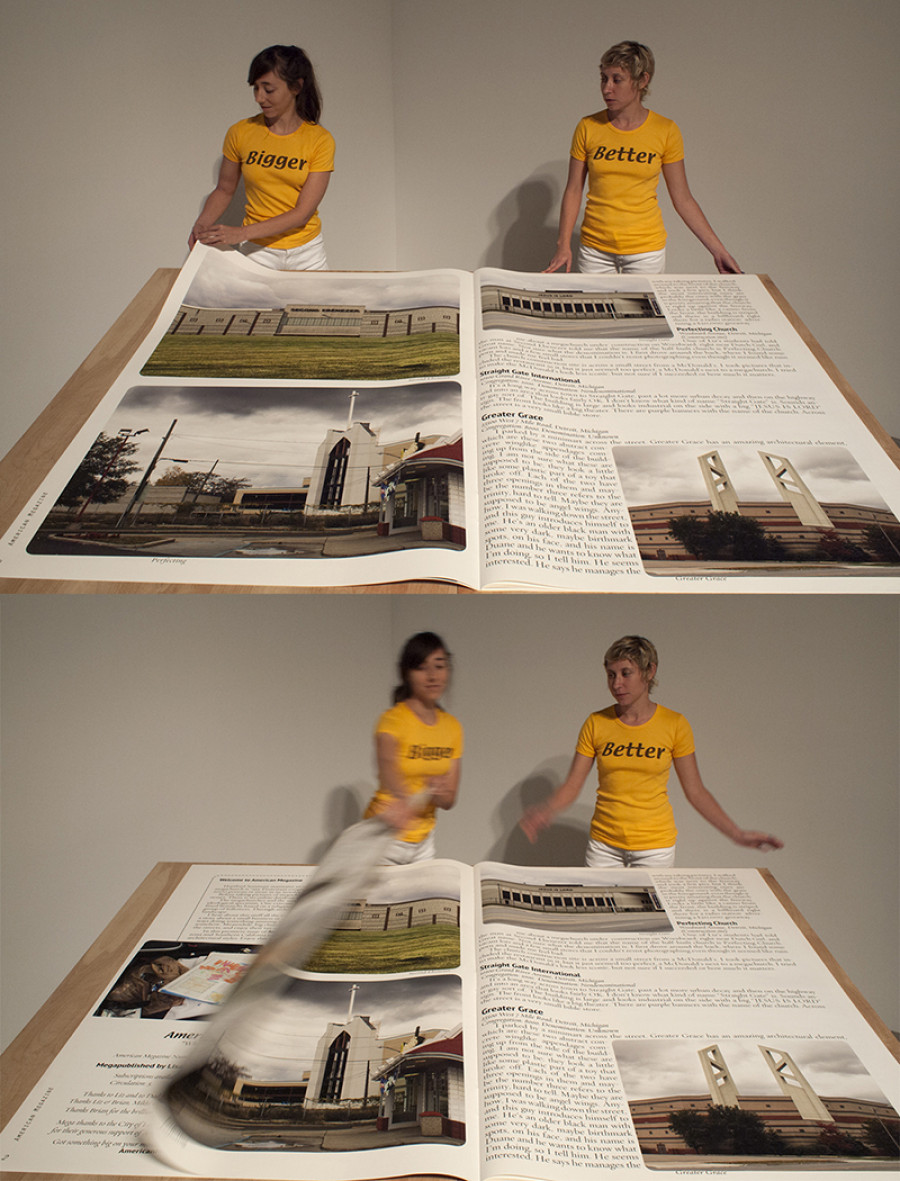 "There's something cumbersome about framed photographs and there's something very precious about them. I didn't want to give the Megachurches that much space, they're very corporate structures. They look like malls or casinos; I didn't want to invest in that. I have a history of making zines and I have a really large printer that prints beautiful photographs, so I wanted to make something ridiculous and oversized."

While Auerbach's sweaters brought political messages to the unconventional canvases of knitted garb, her Megazine transforms a traditionally radical medium into a bizarre tour guide through the corporate churches of SoCal.

As a foil to her Megachurch series, Auerbach began photographing small business psychics; sites worlds apart yet still somehow related to their gargantuan counterparts. While photographing the independent psychics, Auerbach began getting readings herself, and became intrigued by the vocabulary exchanged in this interaction.

"I was interested in the language being used and this idea of an individual interpretation of some spiritual universe. In a way it felt like similar to how artists work. I felt like they were trying to convince me to see the world in a different way. And they're doing this on an individual level. I felt like there was this kinship in terms of bringing a broader idea, maybe supernatural in some way, to an audience of one."

Auerbach incorporates snippets of speech from these readings into knitted tapestries, swarming with blurbs including, "There's no real time and space" and "Beliefs co-create reality." The mantras float somewhere between inspirational, cheeky and bizarre, the cartoonish quotes offering a potential portal to a new understanding, with one foot in the world of clairvoyance and the other in the world of art.

The final portion of Auerbach's Gavlak exhibition focuses on bookshelves, both the knowledge they hold, the time they span and the signs they signify about their owners.

"I have attachments to books for reasons that are incomprehensible," Auerbach writes on her website. "I think I may 'need' to look something up in some book I haven’t opened in a century or so or maybe someone I love gave it to me. Some books I can’t imagine not having available to me anytime of the day or night, even if I never actually open them. They are comforting to have on the shelf, looking at me as I slumber, perhaps reminding me of another time or place or mindset. Anyhow, I don’t trust anyone who doesn’t have at least a few books in the house. You might not be able to judge a book by it’s cover but you can find a lot about somebody from their bookshelves. Or lack thereof."

"It's almost like a bookshelf becomes a self portrait of whosever's books they are," Auerbach told HuffPost. Thus the artist created a zine-like summation of all the books in her massive collection. Titled "Bookshelf," it features the title and author of each book along with details that swerve back and forth between plot summation, personal experiences and vague observations, treating the book as text and physical object.

"I bought this book in order to learn about
Kraftwerk’s cycling team, but I never read
it. Am saving it for a rainy day, though those
are rare in Los Angeles."

Along with the zine, Auerbach also crafted knitted representations of bookshelves, dizzying black-and-white spreads of book spines with no center. "You could probably make a case for the bookshelves being emblematic of place in some way," the artist said. "There are a lot books about LA or of LA artists or were read in grad school in LA. There's probable some LA-ness."

While the exhibition isn't consciously painting a portrait of Los Angeles, the new age influence of psychic mantras and the easy breezy pace of a bike ride certainly offer a taste of that Southern California something.

"Who knows if it's really an LA show? A lot of it has been influenced and inspired by riding my bike in LA," Auerbach expressed nonchalantly.

Auerbach's exhibition runs from September 13 through October 18, 2014 at Gavlak Gallery in Los Angeles, and you can get a taste of the work below.