Landing at the Lisbon International Airport on my way back to America, I dreaded the dull five hour layover. I'd never been to Lisbon, and when I asked a few of the shop assistants if a quick trip to the center of town was feasible, they encouraged me to go.

Given an opportunity to see a new city and experience a new culture, I take it, even if I've only got a few hours.

Outside the arrivals area, I found the Aero Bus the shop assistants told me about. I could have taken the tour bus, which drives around the city for a few hours, but the first bus didn't leave until 9:30am. It was 8:30am and time was ticking before my flight so I decided to venture out on my own. The Aero Bus only costs a few euros and took just 14 minutes to reach the city center.

Praça de D. Pedro IV
Arriving at Praça de D. Pedro IV, I was welcomed by the wave pattern of the Portuguese mosaic pavement, two baroque bronze fountains, and the statue of Dom Pedro IV, who was once the King of Portugal and the Emperor of Brasil. The square has been a part of the city center since the Middle Ages, but was rebuilt after the massive 1755 Lisbon Earthquake. Today, the plaza is engulfed by buildings, including the impressive neoclassical National Theater. The cafés were open early to serve breakfast to wandering tourists, but I decided to wander around taking photos. 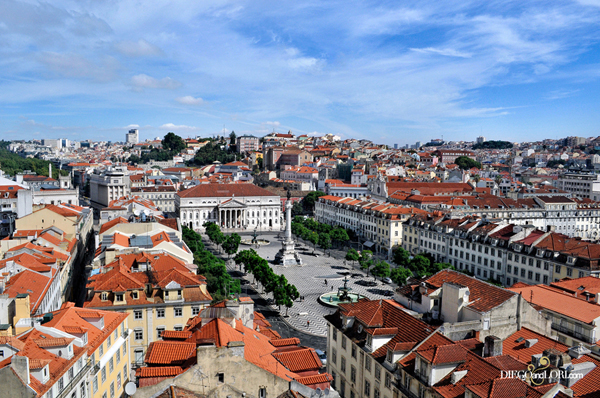 I met a kind man from Pakistan who spoke quite good English. He was delighted to go out of his way to show me the passageway through Baixa (Lower Town) to the Tagus River. Walking along Rua Augusta, I ran into a local artist, Michael, who was making an artful tribute to Hello Kitty out of paper. I watched him create his masterpiece as other tourists gathered and took photos. We had a friendly conversation, him in his broken English and me in my jumbled Spanglish; before I left he gave me a lovely paper star.

Continuing on my way towards the banks of the Tagus River, I window-shopped until I finally arrived at the Praça do Comércio and the river beyond. I felt a sense of peacefulness standing just inches from the river that once destroyed the plaza with a tsunami, a result of the 1755 earthquake, and witnessed the 1908 assassination of King Carl I as he was in his carriage returning to the royal palace.

I still had a little time before I needed to be back at the airport, so I made my way up the neo-Gothic elevator, Elevador de Santa Justa. At the top, there was an awe-inspiring panoramic view of the city including Rossio Square, the Carmo Convent, the Castle of São Jorge and the Tagus River. It was a breathtaking way to end my short exploration -- and I still made it back to catch my flight.

Visiting a city between flights:

1. Ask the Locals: Is there a local bus, a tour bus or a train that goes into the city.
2. Choose one area or place to visit: the old historical center, a museum or a popular restaurant.
3. Take a Taxi Tour: If you have little time and the money, just ask a taxi driver to drive you around. I did this in New York City and Pisa between flights.

So, the next time you´ve got a few hours, take a chance on a quick tour. It'll enrich your life two-fold, but keep an eye on the clock, to catch your flight!

You Might Also Like:
-Teruel Is Spain's City Of Love
-Zaragoza, Spain And The Fiestas Del Pilar