Canadian Prime Minister Justin Trudeau is even dreamier than usual when he talks about gender equality.

During HeForShe’s second anniversary event Tuesday night, Trudeau made a surprise appearance and committed to being a HeForShe champion for youth engagement. The 44-year-old prime minister also gave a powerful speech about feminism and explained why men are integral in the fight for gender equality.

“There are few causes that I am as passionate about as the one that is at the core of the HeForShe movement,” Trudeau told the crowd. “The need for gender equality and the need to have everyone, men and women alike, doing their part to help get us there.”

Emma Watson gave Trudeau a HeForShe pin before he spoke.

Trudeau explained that although his HeForShe title includes the word “champion,” he doesn’t feel like one. “The word ‘champion,’ when I think about myself, feels a little strange,” the self-proclaimed feminist said. “You see, I don’t think that anyone should find it remarkable that someone like me — a son, a brother, a husband, a father, a political leader — should be interested in advancing opportunities for women and girls. I say that because I think that everybody should be in the business of improving opportunities for women and girls.”

“When women and girls get ahead, everyone does better in society,” Trudeau said. “It’s not just about women’s issues, it’s about all of our issues. And teaching that to our kids is really, really important. Because we know if kids grow up in a more equal world, it is a better world.”

We could not agree more. 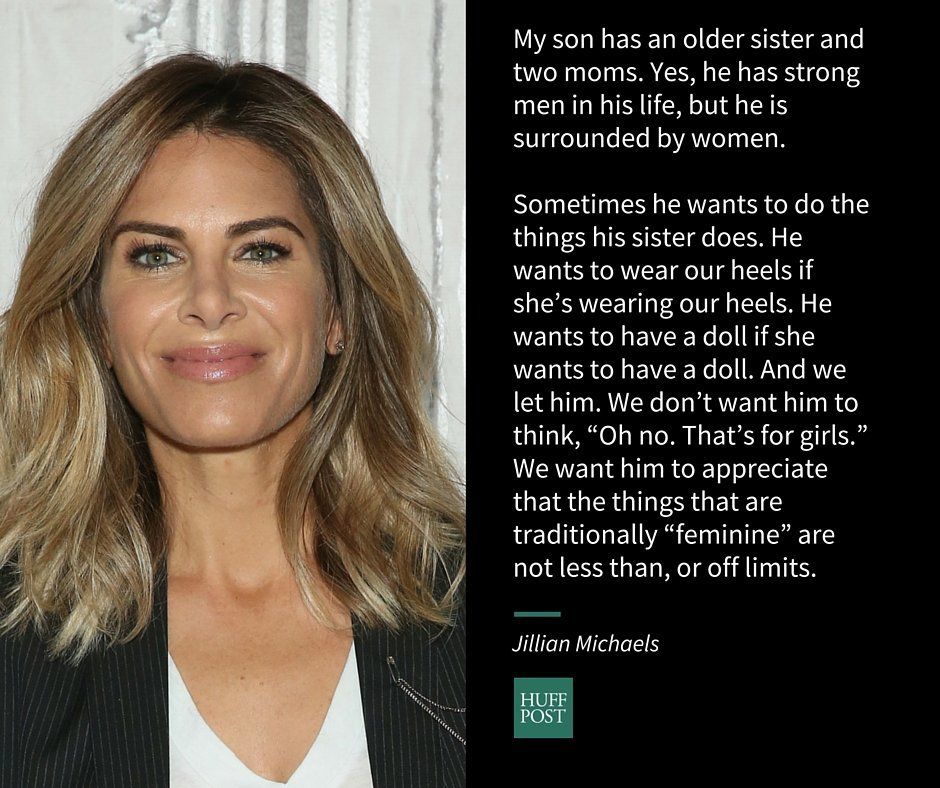 1 / 10
Jillian Michaels, Trainer
It&rsquo;s most important to lead by example and show my son that women are just as strong, just as smart, just as capable. My son has an older sister, and two moms. Yes, he has strong men in his life, but he is surrounded by women. Sometimes he wants to do the things his sister does sometimes. He wants to wear our heels if she&rsquo;s wearing our heels, he wants to have a doll if she wants to have a doll. And we let him. We don&rsquo;t want him to think, &ldquo;Oh no. That&rsquo;s for girls.&rdquo; We want him to appreciate that the things that are traditionally &ldquo;feminine&rdquo; are not less than, or off limits. <br> <br>He&rsquo;s four, so I haven&rsquo;t thrown the word &ldquo;feminism&rdquo; at him yet, just because he can&rsquo;t necessarily understand it, but it&rsquo;s not something I&rsquo;d shy away from in the future. We do talk a lot about equality. We&rsquo;re a bi-racial family and we&rsquo;re a same sex family. We make the concept of equality a very, very big deal in our household. <br> <br>We&rsquo;re also teaching him, right now, that no means no. So if I&rsquo;m tickling him and he says, &ldquo;No, stop!&rdquo; I stop. I don&rsquo;t keep playing. And I reiterate, &ldquo;If you say stop, I&rsquo;m going to stop, because I respect your boundaries.&rdquo; I&rsquo;m not quite sure how it will translate, but I think it's important that men begin to learn at a very young age that it&rsquo;s OK for them to have boundaries, and that they need to respect other people&rsquo;s boundaries.<i> -- Jillian Michaels, trainer and author</i>
Getty