What do I want to tell world leaders in New York? I want to tell them children and young people not only deserve an opportunity - but have the right - to be involved in the decisions that affect us. Why? When we have a say in decisions that impact our lives, we develop a closer connection to, and become more involved in, the wellbeing of our communities. If our voices are listened to and acted on, programs and services better reflect our needs - and everyone benefits.

I serve as a member of a Child Forum organized by the development organization World Vision. As part of the forum I help to educate people in my community about the harmful consequences of early marriage and child labor. I regularly meet with a Ward Counselor, a member of local government, and have been able to use my voice to keep children in school rather than working in factories. I believe every child has the potential to improve the world around them - if they are just given the opportunity. 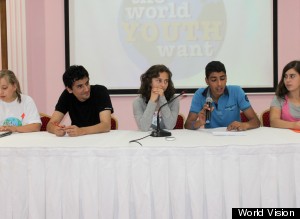 It's this message - that children and young people are part of the solution - I will be taking to leaders in New York. The world is rapidly changing, which brings opportunities, but also huge risks for young people. We need to make sure that whatever global targets follow the Millennium Development Goals, they take into account the needs of the most vulnerable.

The current Development Goals have achieved some notable successes in Bangladesh. There's been a 64 percent increase in child enrollment in primary school since 2000. Half of these primary students are now girls - and more than half of people attending secondary school are now female. The number of children and mothers dying from preventable diseases has also decreased. But there's still big gaps that exists.

In my area there are health facilities in a state of disrepair, and the availability of drugs and medical supplies is often very limited. And while the number of malnourished children has fallen, it is still far too high. More than 40 percent of young people in Bangladesh are stunted.

I've seen in my own community parents who work 12 to 16 hours daily, but are still unable to lift themselves out of poverty. With their parents at work, children are often forced to play the role of the caregiver to younger siblings, or are compelled into hard labor themselves.

In doesn't need to be this way. While I can't save the world on my own, I've seen how I can make a small difference in my own community when I'm listened to. And millions of children around the world, just like me, can also make a difference in their own community if given the chance.