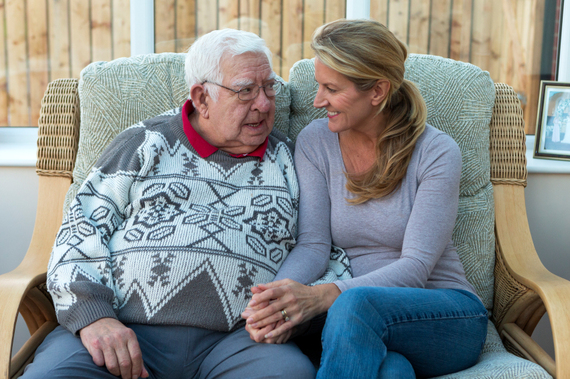 Spending four days visiting my father-in-law at his assisted living residence in D.C. was not exactly the Spring Break I had envisioned. Fidgeting on the plane ride next to my even more antsy children, I figured the "Break" part of the trip would surely be missing from the things we are all generally trying to escape: stress, fatigue, sadness, guilt. Turns out the "Spring" part would be missing as well, since 30-degree weather with rain and snow was the gloomy forecast for the week. Instead of parked with a fruity drink on a beach somewhere, I'd be taking shelter from the cold, sharpening my listening and empathy skills for a man in need of a little warmth, too.

Several years ago, my father-in-law fell and broke his hip, and at just 75 years old, could no longer care for his basic living needs on his own. He now lives in a two-room unit of a lovely, albeit "depressing" and "lonely," high-rise with 100+ other seniors, most of whom are far worse off than him. While his long-term memory seems to be in tact, his short-term memory, along with some nutrition and mobility issues, prove to be a challenge. There are times he can't recall a doctor's visit from just a couple of days before.

My kids have been to his residence enough to know the drill by now. And though they are temporarily distracted by puppies and cookies in the lobby, the sights and smells of old age are hard to ignore. Residents gaze out with a faraway look from oversized armchairs, or sleep hunched over in wheelchairs parked in the café. Those who are alert stare down my youngsters with wide eyes and even wider grins, overjoyed to see the beauty and promise of youth in their midst.

A yearly visit to this place, I realize, is the least I can do. I'm one step removed from the decision-making and caretaking that my husband and in-laws are doing their best to manage. I see how they, like so many other families, often give more than they sometimes have to ensure his continual care and comfort. And I know I couldn't do a better job.

But I found on this trip that one small thing I can do, is listen. To sit in presence with a man who is sometimes depressed, often lonely and always eager to talk -- and listen with an open heart.

Listen to the tales of his youth that he loves to tell, and re-tell, as if they happened just yesterday. Especially the one about the beloved summer camp he attended with a fine group of young boys from all over the world, each hand-selected to live with and learn from one another, and from their native cultures.

Or give an understanding nod about the latest drama in the building. Like his run in with the lady down the hall when he went on his daily walk to reach out to someone new and encourage others to do the same. "Who cares about anyone else?!," she snapped at him.

Or just to sit and hold his hand when he tells us that he's lonely.

I think sometimes we have a tendency, consciously or not, to dismiss the worn-out tales, these weary revelations of heartbreak and burden, as a part of growing old. We exchange knowing glances as we listen to our elders rattle off the same stories over and over. We snicker at their silly expressions, and roll our eyes at the never-ending complaints. Oh geez, here Grandma goes again. Someone get her a scotch (or take it away). Things that really, for all of us, at one time or another, are just a part of living.

But the thing about our Dad, and Granddad, is that he's just not that easy to dismiss. Thankfully this loving, witty and unconditional parent has not entered a clinical state of dementia, but pivots back and forth between crystal clarity and general fogginess. I'll tell him about a story I'm writing, and he'll fire back a dead-on insight that blows me away, followed by a sweet sentiment about having me for a daughter and gratitude for all the blessings we share. You are as much a part of me as anyone here, he tells me.

And in the next breath, he's back to how they took away his blanket, and he had to hunt it down from the laundry room on his own because no one in the place really gives a damn.

But I keep listening.

He wants to talk about his work as a philosophy professor and author. He proudly recounts a piece of his writing and tells us, That's not me who did that, or wrote that. That's my grandfather. And his father before him. I feel like the luckiest man in the world. I really do.

He apologizes for his "craziness" as he collects old photographs from his room, many of which we've seen before. He wants to show us our heritage, and tell us more stories. It's important, he says, that we know where we come from.

A nurse arrives to dispense his daily medication. He introduces us, then asks her to give the kids a fist bump. She throws her head back, letting out a deep chuckle as if she's used to these sort of silly requests from him, and kindly extends her fist. The mood in the room is lighter as we watch her gently place the many pills, one-by-one, on his tongue. In between, he feels compelled to give us bits of nurse trivia -- her beautiful name, where she's from, and some of the little jokes between them. We laugh, and take notice.

One day we go to visit and find he's not in his room. He's making the rounds, an employee tells us with a smile. Suddenly he appears at the door with a neighbor woman from one floor down. (He reveals to us later that she's 99, though by her mobility and spunky personality, she appears a good 20 years younger.) He asks his grandkids to give her a hug. My 7-year-old willingly obliges, while my 10-year-old politely declines with a nervous look my way. I give her an understanding wink, knowing that it's just his way of connecting. Of showing empathy for an elderly neighbor who has no family of her own -- other than a nephew who lives 90 miles away -- by offering to share his grandchild's sweet embrace. Like a band-aid for the loneliness he feels so acutely on his own skin. Ever the giver in the midst of his own suffering.

So I sit back, and settle in to listen some more.

And somewhere between feeling sorry for myself that I'm not basking in the sun somewhere, and feeling adored by this gentle, generous man who has adopted me as his own, I see that our aging parents are not just a part of life that we are required to bear and usher through as best we can. They are the reflection of an older version of ourselves. Human beings who just want to know that their life has meant something. That there's still time to share what they've discovered, and to leave something behind. And to know that we ducklings have been paying attention, and have learned a thing or two.

And though it's not always easy, and sometimes painful, something as simple as a bent ear can provide a different kind of break -- one we both really needed.

As we leave to make our way to the airport, my father-in-law says to his granddaughter, You know we are connected, the two of us. I am you, and you are me. And then another fist bump.

Sometimes I think when we exchange those little glances and giggles about our dear old loved ones -- even when they show us glimpses of brilliance -- the joke is really on us. Maybe when we reach the age of "old," in between the crazy babbling and the far-off stares, we know exactly what we're doing, and what we're teaching.

And one day, we know, our kids and grandkids will figure it out, too.

You can see more from Susan at www.handprintcommunications.com